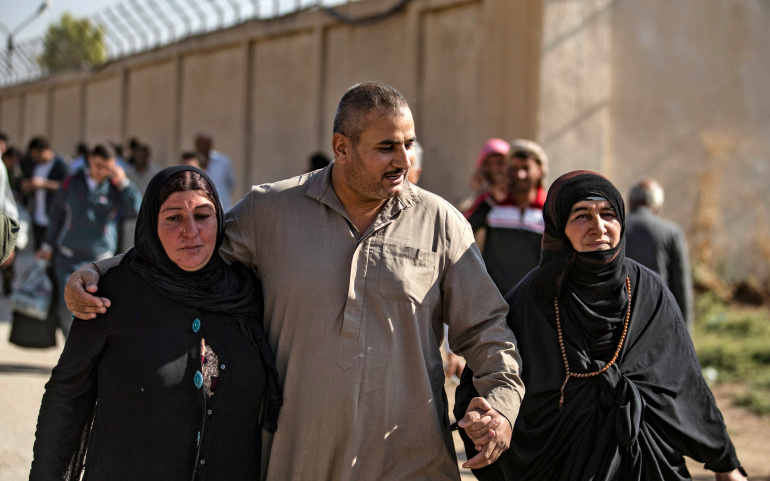 A Syrian man, with his family after he was freed from the Kurdish-run Alaya prison in Qamishli, northeast Syria, October 15, 2020 (Delil Souleiman/AFP)

Amina Omar, the head of the Syrian Democratic Council, told reporters in the city of Qamishli that the freed men have “no blood on their hands” and have repented over their membership of ISIS.

“They are people who can be reformed,” Omar said.

The Council, which has autonomy over Kurdish cantons in the northeast, said detention terms will be halved for another 253 ISIS fighters.

Omar said all those freed are Syrians who have served at least half of their sentences.

Arab tribes in the region have called for the releases.

Reporters outside the Alaya detention facility on the outskirts of Qamishli saw dozens of detainees reunite with relatives who had come to meet them.

The Kurdish authorities have overseen more than two dozen prisons, holding about 10,000 ISIL fighters, after the US-supported, Kurdish-led Syrian Democratic Forces pushed the Islamic State out of the region in March 2019.

Among the detainees are about 2,000 foreigners, including about 800 Europeans.

Earlier this month, the Kurdish-led authority said all detained Syrians, except those who fought with ISIS, from the overcrowded, unhygienic al-Hawl camp.

Kurdish Authorities — We Will Remove Syrians from Al-Hawl Camp

The camp, with about 65,000 occupants, holds Islamic State fighters and their families as well as other displaced people. The UN estimates there are 28,000 Syrians, 30,000 Iraqis, and about 10,000 other foreigners in the complex. The majority of occupants — almost 40,000 — – are children from more than 60 countries.

The Kurdish administration, short of funds, is trying to cut the costs of running the camps.