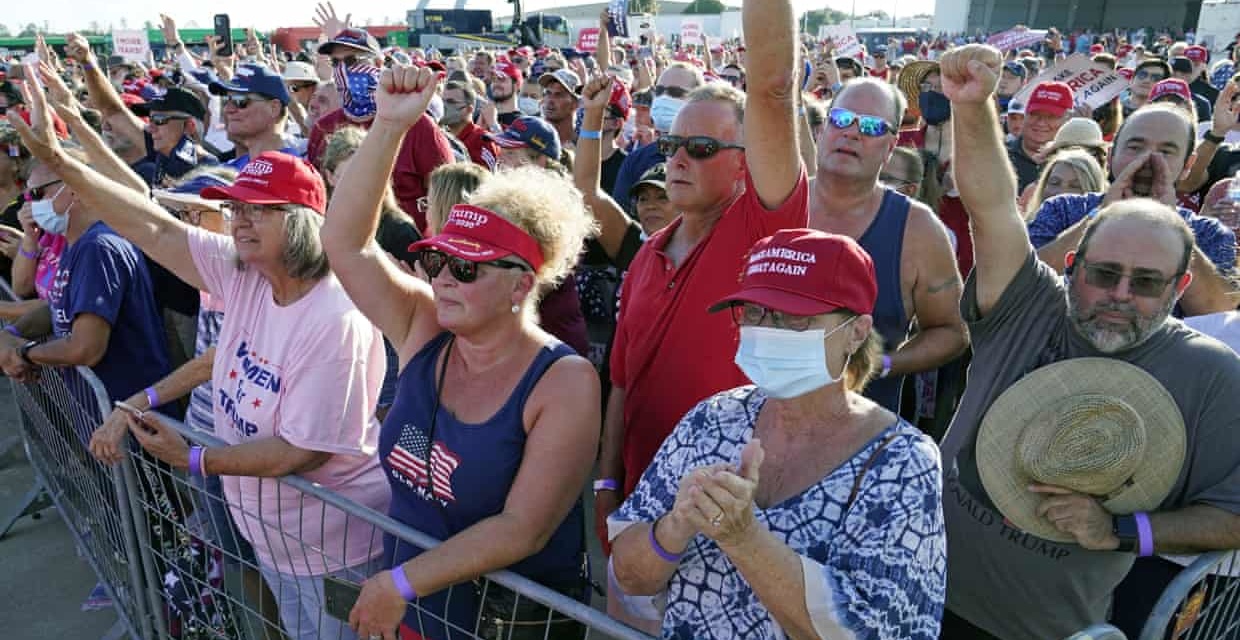 We’ve seen that when you have situations of congregate settings where there are a lot of people without masks, the data speak for themselves.

It happens. And now is even more so a worse time to do that, because when you look at what’s going on in the United States, it’s really very troublesome.

Trailing Democratic Presidential candidate Joe Biden in polls and dismissing that he might be infectious, Trump rambled for 65 minutes to the audience, packed together with few wearing masks.

Unmasked as he set off on Air Force One at Andrews Air Force Base, he declared himself “immune” from the virus and flouted any idea of distancing himself from others: “I feel powerful. I’ll kiss the guys and the beautiful women and everybody – I’ll give a big, fat kiss.”

On Sunday, Fauci called out the Trump campaign for its distortion, in a 30-second ad, of his remarks on Coronavirus. The campaign declared that the doctor, sidelined by Trump since late May in favor of the neuroradiologist and Fox TV commentator Scott Atlas, had praised Trump’s leadership.

In fact, Fauci was referring in the March interview to the work of the White House Coronavirus Task Force.

Fauci told CNN’s Jake Tapper on Sunday that the ad should be removed, saying, “It’s really unfortunate and disappointing that they did that.”

However, the Trump campaign said it would continue broadcasting of the misleading claim.

Told by Tapper that the campaign might circulate another ad portraying his remarks, Fauci said, “That would be terrible. That would be outrageous. In fact, it could backfire on them….I hope they reconsider that.”

Biden on Economy and Pandemic

Biden campaigned in Ohio with a focus on handling of the pandemic and competence in overseeing an economic recovery.

He detailed how the Obama Administration, in which he was Vice President, rescued the US auto industry after the 2008 financial crisis: “The auto industry that supported one in eight Ohioans was on the brink. Barack [Obama] and I bet on you, and it paid off.”

At an appeaerance in Cincinnati, he contrasted his approach to Coronavirus with that of Trump and his Administration:

I have a plan to deal with this pandemic responsibly. Testing, tracing, masking, not politicizing the race for the vaccine. Plan for its safe and equitable distribution. Provide the funding for PPE and other resources for schools and businesses to reopen safely.

Boarding Air Force One, Trump said in a hoarse and strained voice, “I feel powerful.”

At the rally, he hailed the rejection of social distancing by mocking Biden’s carefully-managed events and proclaiming his as the “real polls”.

Trump then tried to grab headlines with a series of lies and false claims. He asserted that Biden would delay a Coronavirus vaccine; that the World Health Organization “admitted that Donald Trump was right”; and that, economically, “no country in the world has recovered the way we’ve recovered economically or otherwise, not even close”.

He continued with the falsehoods; Barack Obama had spied’ on his 2016 campaign; that Biden “wants to quadruple your taxes”; that he “just got the Bay of Pigs award from the Cuban-Americans”; and that Biden would “dismantle your police departments, dissolve your borders…release criminal aliens, confiscate your guns, destroy your suburbs, and drive God from the public square.”

The Biden campaign used a visual comparison to take down Trump’s insistence that he is “young” while his challenger is physically and mentally impaired.

Jason Miller, the Trump campaign’s senior strategist, dismissed any possibility of adhering to medical and public health guidance over the rallies. He pledged “two to three events a day, and that will grow as we get closer to Election Day.”