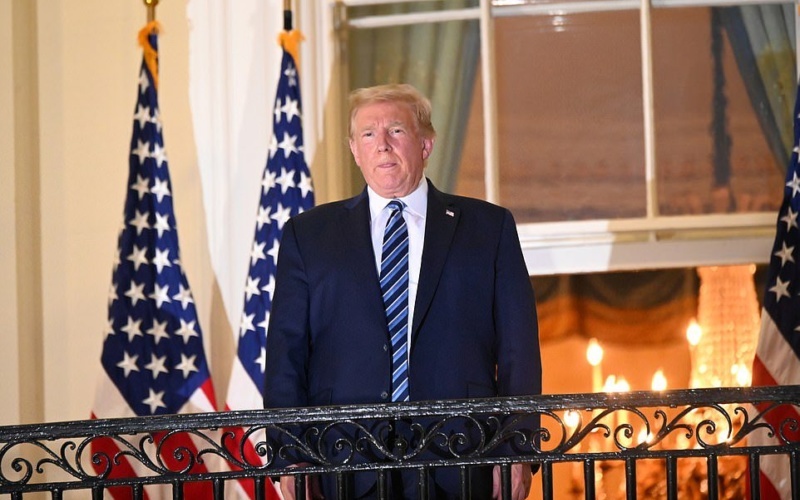 Dr. Anthony Fauci, the Government’s top US infectious diseases expert, has cautioned that Donald Trump could experience a “reversal” after demanding his release from hospital: “The issue is that he’s still early enough in the disease that it’s no secret that if you look at the clinical course of people sometimes, when you’re five to eight days in, you can have a reversal.”

Fauci said he believed the experimental antibody cocktail Regeneron had helped Trump. He said scientists are “really quite optimistic about” the treatment, now in late stage trials in the US.

The doctor has been sidelined by Trump because of his frank assessments about the virus, implicitly countering Trump’s denial and disinformation.

Biden told moderator Lester Holt on an open-air stage, “I would hope that the President having gone through what he went through – and I’m glad he seems to be coming along pretty well – would communicate the right lesson to the American people.”

Masks matter. These masks, they matter. It matters. It saves lives. It prevents the spread of the disease….

Anybody who contracts the virus by essentially saying, masks don’t matter, social distancing doesn’t matter, I think is responsible for what happens to them.

Last Tuesday, two days before he tested positive for Coronavirus, Trump mocked Biden in the first Presidential debate, “He could be speaking 200 feet away shows with the biggest mask I’ve ever seen.”

ORIGINAL ENTRY: Leaving hospital after three days of treatment for Coronavirus, Donald Trump strikes a defiant pose on Twitter and in an appearance on the White House balcony, ““Don’t be afraid of Covid.”

Bored, angry at staff and TV coverage, anxious about his chances of re-elected, and chafing at any appearance of weakness, Trump insisted as early as Sunday on his discharge from Wlater Reed Medical Hospital.

He maintained the demand despite receiving emergency oxygen treatment on Friday before medical evacuation by helicopter and then experimental antibody treatment, the antiviral drug Remdesivir, and the steroid Dexamethasone — recommended for use only in severe cases of Covid-19.

He settled for a drive-by past supporters on Sunday, but after an all-caps Twitter barrage to start Monday, declared that he would be leaving Walter Reed at 6:30 p.m.

He pursued the tactic, from personal and political motives, of showing that he had defeated the virus even as he is still suffering from it. But the tweet risked the appearance of being ignorant or insensitive about those who have died, those who are still seriously ill, and their families.

That's great news. I would tell my dad, but he died of COVID 6 months ago. https://t.co/L5pPxQQcxH

That's right, America. You too can be medivacked to one the nation's premier hospitals, evaluated & monitored around the clock by a team of elite doctors, treated with an exclusive array of drugs, and come out feeling 20 years younger on the other side. Don't be afraid of Covid. https://t.co/cq9JVpzZd5

The statement overrode the medical briefing by lead physician Sean Conley that Trump is not “out of the woods yet.”

Conley said Trump is still on Remdesivir and steroids and will receive 24/7 medical treatment at the White House, but “meets or exceeds” discharge requirements.

The doctor evaded questions on Saturday about emergency oxygen treatment and was immediately contradicted by White House Chief of Staff Mark Meadows, who told reporters of the seriousness of Trump’s condition.

On Monday, Conley would not discuss the findings of a scan of Trump’s lungs, which may have been damaged by the virus.

Maskless and Gasping for Breath

As he left the hospital, Trump paused to pump his fist a few times at chest level. But he did not respond to shouted questions from reporters, including about his “Don’t Be Afraid” tweet, about the number of infected White House staff, and “Do you think you might be a ‘super-spreader’?”

Trump ignored the super-spreader question while he walked out of the hospital: pic.twitter.com/VXAUKhd5TE

After the Marine One helicopter landed on the White House South Lawn, Trump turned to face the TV cameras and — in another sign of defiance of the virus and medical advice — removed his mask to salute the departing aircraft.

Trump gave another performance after entering the White House. He appeared on the balcony and again theatrically took off his mask.

However, his show of strength was undercut by his visible gasping for breath.

Only days into his diagnosis, the first thing President Trump does when he gets back to the White House is take his mask off. pic.twitter.com/kyqvHcSbIl

Trump pressed on with a Monday evening, repeated his line, “Don’t let it dominate you. Don’t be afraid of it. You’re going to beat it.”

He then praised himself for contracting the virus and then supposedly vanquishing it, “I stood out front. I led. Nobody that’s a leader would not do what I did it….Maybe I’m immune.”

He ended with the declaration, contradicting all his top medical advisors, “The vaccine is coming momentarily.”

The White House tried to protect Trump with the blocking of new federal guidelines over the emergency release of a vaccine.

The health and safety provisions would have almost certainly prevented the authorization of any vaccine before Election Day on November 3.

Trying to ensure the guidelines are met, the Food and Drug Administration may share the standards with an outside advisory committee of experts, which is supposed to meet publicly before any vaccine is released for emergency use.

“Is He Trying to Put More Lives at Risk?”

Dr. Céline Gounder of New York University explained, “I think it would be disastrous to be in a situation where he gets really sick at the White House, and you’re having to emergency transfer him. To me, it’s not safe.”

Dr. Mangala Narasimhan of Northwell Health said it might be reasonable for Trump to return to the White House if he does not need oxygen, given 24/7 treatment is available.

But she said the information about his condition is too limited to make an assessment —“We’re all guessing” — and warned Trump is heading into the critical period of the virus where “there could be a very rapid decline”.

Doctors and relatives of victims continued to express their worry and anger about Trump’s messages.

Shane Peoples, whose parents Darlene and Johnny were killed by the virus on the same day in September, said:

Is he actually trying to put more lives at risk? He needs to be held accountable for the deaths that could have been prevented if he never downplayed it.

Fiana Garza Tulip, who lost her mother to the virus, wrote of a “slap in the face” and a “painful reminder that our president is unfit for office and that he does not care about human life”.

Press Secretary Kayleigh McEnany is among the latest White House staffers to test positive for the virus.

The trio are among at least 14 White House and Republican figures who have announced their infections since last Thursday, and McEnany is the 11th case linked to a White House ceremony for Supreme Court nominee Amy Coney Barrett on September 26.

But the White House again is refusing to trace the contacts of guests and staff members at the Rose Garden ceremony. Instead, it is only notifying people who were in close contact with Trump in the two days before his Covid diagnosis on Thursday.

Rather than carry out the detailed phone conversations needed for tracing, the White House is limiting itself to e-mail notifications of potential exposure.