A Beginner’s Guide: Packing the Supreme Court with Conservative Judges 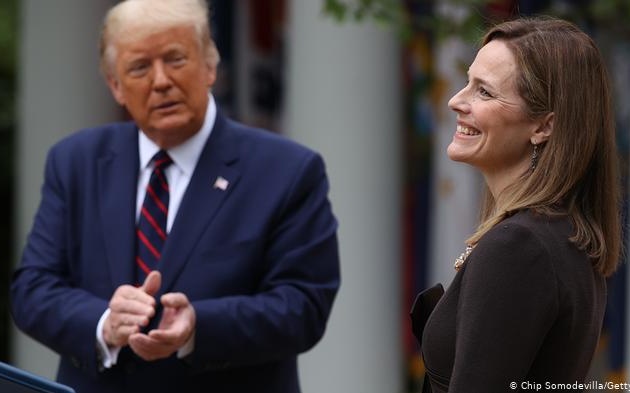 Judge Amy Coney Barrett with Donald Trump at the White House ceremony for her nomination to the Supreme Court, September 26, 2020 (Chip Somodevilla/Getty)

The death of US Supreme Court Justice Ruth Bader Ginsburg on September 18 generated a wave of grief from her many admirers, followed by fear on the part of liberals regarding the likely consequences.

New Supreme Court Justices are nominated by the President and require confirmation from a majority of the US Senate, and Donald Trump has already successfully appointed two since taking office in January 2017.

The first, the replacement of Antonin Scalia following his death in February 2016, was procedurally controversial. A Republican-controlled Senate had refused even to hold hearings to consider President Barack Obama’s nominee during the final 11 months of his term, preferring to wait until after the election in hope of getting a candidate more to their liking.

This led to accusations the Republicans had “stolen” a seat on the court. Nevertheless, Scalia’s eventual replacement with Neil Gorsuch did not change the ideological composition of the Court: one conservative justice was replaced by another.

More consequential was the replacement of Anthony Kennedy, who announced his retirement in June 2018. Kennedy had in recent years been the “swing” justice who could set the direction of the court by breaking ties when its conservative and liberal justices divided 4-4.

His replacement with Brett Kavanaugh tilted the court more firmly towards the conservative side on most issues. Awareness of these stakes contributed to an unusually acrimonious set of Senate confirmation hearings for Kavanaugh in September 2018, focused on allegations about his past personal conduct including sexual abuse of women when he was at Yale University.

Now the death of “RBG”, only weeks before Trump faces likely defeat in his bid for re-election, has presented Trump and Senate Majority Leader Mitch McConnell with an opportunity to replace a reliably liberal justice, establishing a reliable 6-3 majority for conservatives.

The president’s nominee is Amy Coney Barrett, previously appointed by him as a judge to the Federal Circuit Court, a tier below the Supreme Court. As with Trump’s other nominees, Barrett comes pre-vetted and endorsed by the Federalist Society, an influential conservative activist organisation devoted to ensuring appointment of as many judges as possible of similar mind.

Conservative Politics and the Court

In theory, nominees to the judiciary do not carry a partisan affiliation, and they are expected once in post to interpret the law and the Constitution in an impartial manner. In practice, it is often fiercely difficult to separate questions of legal interpretation from questions of politics.

The significant philosophical divide in American jurisprudence is between those who favour restrictive approaches to interpreting the Constitution and those who prefer expansive ones.

Liberal jurists of various stripes argue that the Constitution can – and must – be continually reinterpreted in light of new developments in society and evolving social norms. Judicial decisions should also give due weight given to their concrete consequences for social and individual wellbeing.

Restrictive approaches typically lead to at least three significant consequences, all welcome to those who favour outcomes that are substantively politically conservative. First, the courts refrain from “discovering” new constitutional rights like a right to abortion (decided in Roe v Wade, 1973) or same-sex marriage (Obergefell v. Hodges, 2011).

Second, the right of the Federal Government to regulate private economic activity, including on the part of corporations, is tightly constrained. Under this belief, many of the laws and resulting actions of the regulatory state, established since the New Deal era of the 1930s, are unconstitutional and should be swept away.

Following through with this logic would return the Court to an approach last seen during the “Lochner Era”, (named after a 1905 case, when it regularly struck down government efforts at economic intervention. It would also entail the radical step of overturning decades of judicial precedent, upon which American economic and social life has been based.

Third, the role of the Federal government and the courts in seeking to enforce equality or fairness in states’ election processes will be minimal. This means opposing laws restricting campaign finance, as in the Citizens United case of 2010. It also means allowing state authorities wide latitude in how they administer elections for state or federal office, potentially allowing measures such as aggressive pruning of voter rolls, reducing numbers of polling stations in certain areas, imposing burdensome voter ID requirements, and gerrymandering districts. All these may be undertaken by unscrupulous incumbents for partisan advantage.

The replacement of Ginsburg with Barrett, and the resulting establishment of a comfortable conservative majority, has many legal observers worried that all three of these trends — already discernible on the court — will accelerate. Early results to look out for will be tightened restrictions on abortion access in some states, new progressive economic or social measures passed by a Democratic Congress and President struck down by the courts, and a hands-off approach from the Supreme Court regarding threats to voting rights.