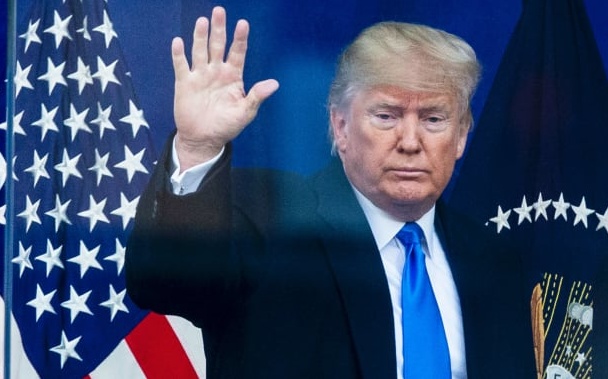 Trump said in a North Carolina appearance on Saturday night:

If I lose to him, I don’t know what I’m going to do – I will never speak to you again. You’ll never see me again.

President Trump: "If I lose to [Joe Biden], I don't know what I'm going to do — I will never speak to you again. You'll never see me again." pic.twitter.com/jQ2RRfHIyH

Trump’s promise came amid his standard complaints and insults, following the smear that Biden was “the dumbest” member of the Senate. He lashed out that Biden “uses a teleprompter” and bragged, “You now have a President who doesn’t have to use a teleprompter, isn’t that nice?” — as he stood in front of two teleprompters.

There are literally 2 teleprompters in this shot https://t.co/orRLixRYW1

Trump said little of substance about the Coronavirus pandemic, repeating his standard disinformation and self-congratulation — but bizarrely giving himself and his Administration a low mark for their management of the crisis.

Trump says he would give himself "a D" for his coronavirus response for reasons he never explains. Weird. pic.twitter.com/W5iYYn4pKV

Biden suspended campaigning on Saturday as a mark of respect for Supreme Court Justice Ruth Bader Ginsburg, who died on Friday from pancreatic cancer at the age of 87.

See EA on BBC: Ginsburg’s Legacy for Rights; UK Government’s Folly Over US Trade Deal
TrumpWatch, Day 1,338: Obama — No Replacement of “Inspirational” Ginsburg Until After Election

I’m Joe Biden and I approve this message. pic.twitter.com/TuRZXPE5xK