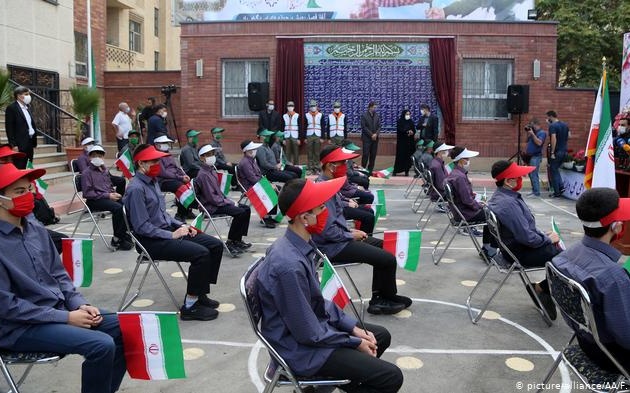 Iran’s schools have reopened for a new academic year, despite a warning from leading officials of the country’s Medical Council about the spread of Coronavirus.

Classes for many of the Islamic Republic’s 15 million students returned on Saturday, two weeks earlier than normal. But in a letter, Council head Mohammad Reza Zafarqandi chided the Education Ministry over a “sudden U-turn”:

The surprising decision to reopen schools would no doubt lead to an increased burden on the country’s medical workers.

When an epidemic hit, schools are the first places that should be closed and the last to be reopened.

Zafarqandi said he hoped the Ministry’s “sudden decision” had not been “politically motivated” or forced by issues other than education.

Council President Abbas Aghazadeh warned that the return to school “could turn into a human catastrophe within a very short period of time”.

About 62% of Iran’s 116,000 schools carried out in-person instruction on Saturday, limiting sessions to 35 minutes. For other students, there were virtual classes through a State TV channel and the educational social network Shad.

Education Minister Mohsen Haji-Mirzaei said there where the number of students is sufficient, pupils will be split into two groups, with one attending on even-numbered days and the other on odd-numbered days.

After belatedly acknowledging the epidemic in early March, the Government contained the virus with closure of schools and universities, businesses, mosques, restaurants, and other public places. However, from April 11 it pursued reopening amid Iran’s economic crisis.

Daily cases, which reached a low of 803 in early May, soon quadrupled before settling at a level of about 2,000 cases per day through the summer.

Former Education Minister Ali Asghar Fani, a member of the Supreme Council of Education, also challenged the Government: “Schools cannot get ready for the reopening in such short notice.”

But President Hassan Rouhani insisted on the resumption despite the medical advice. He told the National Coronavirus Task Force on Saturday:

In the seven months since the outbreak of coronavirus in many countries, the closure of schools and the forced stay of children at home has created psychological problems for children and families.

Children’s going to school and attending that social atmosphere creates a beautiful relationship between home and school for the upbringing of children.

In his statement, broadcast on State TV, Rouhani issued the qualification that “parents would not be forced to send their children back to school”, but continued, “Attending school is not just about learning lessons and knowledge, but attending school brings about education and learning of morals and social skills for children.”

Many parents in the capital Tehran reported refused to send their children back on Saturday.

Rouhani reiterated in a Cabinet meeting on Sunday, “Education is just one of the functions of school, and virtual education is not a complete alternative to the school institution.”

The President also praised the reopening of universities, maintaining that classes “should be held face-to-face…where possible”.