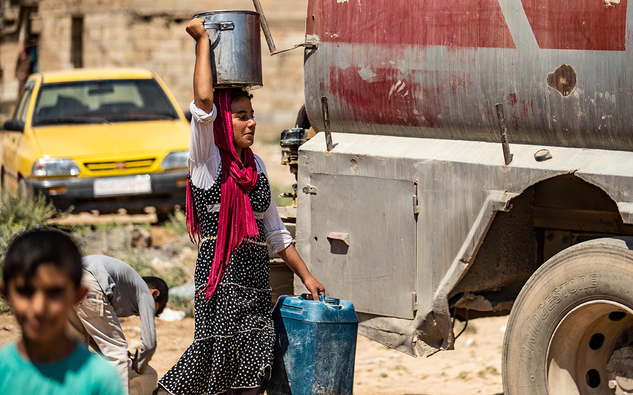 Residents in Kurdish-held northeast Syria say Turkey has cut their water supply, in an effort to force the Kurdish administration to provide more electricity to the border area controlled by Ankara.

The latest cut in Hasakah Province, including Hasakah city, has lasted three weeks.

Most of northeast Syria is under the Kurdish autonomous authority, after the US-supported Syrian Democratic Forces completed the expulsion of Islamic State in March 2019.

But Turkey considers the YPG militia, the leading element in the SDF, to be part of the Turkish Kurdish insurgency PKK which has battled Ankara’s security forces for more than 35 years.

Last October, Turkey and allied anti-Assad fighters launched a cross-border operation to seize a 120-km (75-mile) corridor along the border. It includes the Alouk power station that supplies drinking water to Hasakah.

Turkish officials claim the Alouk station is under maintenance. But the Kurdish authority says there have been eight cutoffs since October.

The latest interruption of water from the Alouk station, which is near the town of Ras al-Ain, began about August 3. Suzdar Ahmad, the joint head of the Kurdish-run water authority, claimed that the Turks were repeatedly “asking for more electricity” for their border area.

On August 13, the Kurdish authority responded by cutting off electricity to the Ras Al-Ain area.

The two sides then negotiated through Russia. On Saturday they reportedly came to an agreement that water might be restored to Hasakah from August 24.

Water as a Weapon?

Residents say they are bathing and washing clothes in brackish, salty water. They queue in streets with empty jerrycans, hoping for water deliveries from aid groups.

The lack of water risks aggravation of the Coronavirus pandemic, which has entered northeast Syria with 25 deaths and 362 confirmed cases. In March, during an earlier interruption, the UN said 460,000 people were at risk in Hasakeh Province.

An elderly resident, Muhammad Khatar, said, “All we want is to eat and drink, and do our job. We have nothing to do with politics.”

But Saleh Fatteh, 45, denounced Turkey: “[They] occupied our land and now they’re cutting off our water.”

The Russian-backed Assad regime, which holds part of the northeast, have used the cutoff to lambast Turkey for using water as a “weapon against Syrian civilians”.