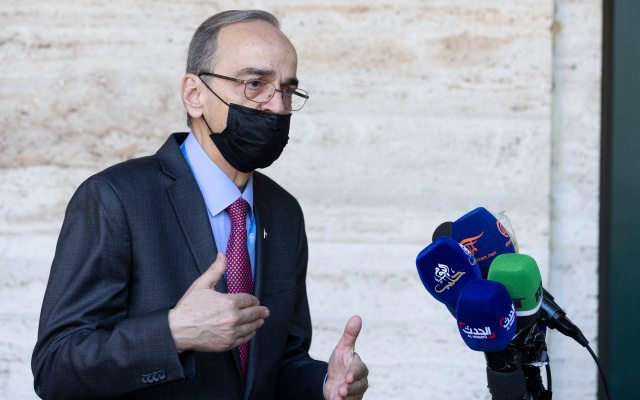 Six days of talks in Geneva, on a new Syria constitution, elections, and political transition, have ended with no advance.

The discussions ended on Saturday with UN envoy Geir Pedersen maintaining that, while there were “many areas of disagreement”, there were also “quite a few areas of commonalities”.

He told the press, “My hope is with continued calm on the ground…we will also see some progress.”

The meetings involved 45 members of the 150-person Constitutional Committee, made up of representatives of the Assad regime, the opposition, and civil society groups. They were disrupted last Monday when four regime delegates tested positive for Coronavirus.

First proposed in January 2018, the Committee convened for the first time last autumn. However, the Assad regime has insisted that priority must be given to “sovereignty” and “terrorism”, preventing any advance on political and Constiutional arrangements.

No date was set for the next meeting.

Opposition co-chair Hadi al-Bahra called for a national ceasefire to ensure a stable foundation for discussions.

“When we see that happen we will see the political process moving faster, because all sides they will know that there is no way for them to achieve a final victory on military terms,” he told reporters.

Pedersen said a ceasefire in opposition-held northwest Syria, declared by Russia and Turkey in March, was “by and large holding” despite violations.

However, concerns have arisen of a renewed Russia-regime offensive to seize more of Idlib Province, where an estimated 3 million Syrians live.

Amid regime shelling, occasional Russian bombing, and clashes between pro-Assad and anti-Assad forces, Turkey said on Friday that it will maintain the “de-escalation zone” amid “violations of the cease-fire and the brutality of the Assad regime”.

Bahra said, “My expectation is that within the coming months we will see a complete, comprehensive ceasefire through all of Syria, that then we will see more international effort to move the political process forward to make it move faster.”

Ahmad Kuzbari, the regime co-chair, did not speak to reporters.