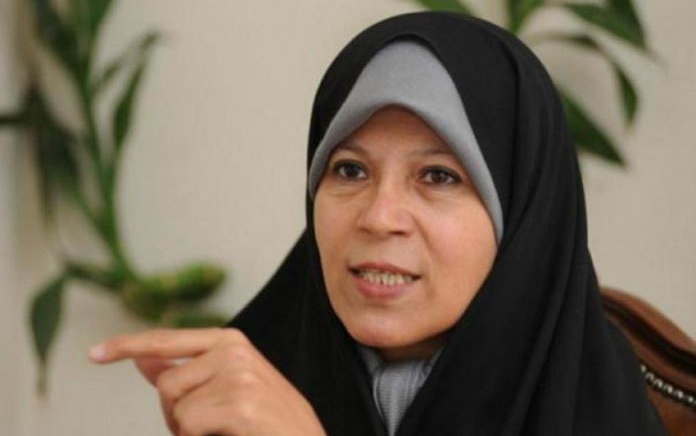 Faezeh Hashemi (pictured), former MP and the daughter of the late President Hashemi Rafsanjani, has challenged Iran’s Supreme Leader over detentions and the economic situation.

In an audio clip obtained by IranWire, Hashemi — a prominent activist on issues such as women’s rights and former political prisoner — criticized prison sentences imposed on those who had called on the Government to “respect the rights of the people”.

Referring to the killing of more than 300 demonstrators by security forces in last November’s mass marches over the economy, she called for legal action against the attackers and for protection of the right to peaceful protest.

And she chided the ongoing punishment of women over compulsory wearing of the hijab:

in these days of the Coronavirus outbreak…is it really the time for morality patrols and cameras and clashes? Should we drag the people to stand in line or confiscate a car because the driver did not wear a headscarf?

Hashemi was prominent in the mass protests over the disputed 2009 Presidential election “won” by Mahmoud Ahmadinejad. As the regime put pressure on her father Rafsanjani — President from 1989 to 1997 — not to speak out, she was imprisoned for six months in 2012-2013.

She continued to risk arrest with her appearances with women’s rights activists and members of the Baha’i religious group, and was reportedly sentenced in March 2017 to six more months behind bars.

Sanctions, iPhones, and the US

The Supreme Leader used his Government Day remarks to chide officials and Iranians over economic matters from buying property abroad to importing iPhones, linking these to comprehensive US sanctions on Iran since November 2018.

Hashemi acknowledged the seriousness of sanctions, but said they are being used to cover up responsibility for long-term problems within Iran.

She explained, “If we cannot sell oil to import medicine, this is not because of sanctions, but because we have not joined the Financial Action Taskforce Force,” the international organization that fights money laundering and finance of terrorism.

Regime elements and Parliament have blocked the Government from accession to the FATF since last year.

Hashemi noted, “Bank accounts and banks are closed on us and we cannot do business,” but challenged the regime’s claim over sanctions, “Incidentally, there is no problem with importing medicine, which has been mentioned several times.”

She explained that Iran’s banking system also limited trade with China, Russia and India: “When we want to exchange goods, they give us the goods they want, not the goods we need. These things put pressure on both the people and the government.”

Promoting her father’s vision of engagement, including with the US, she asked:

If the sanctions are so bad, then why now, when more than 40 years have passed since the Revolution, should we behave in such a way as to impose so many sanctions on ourselves? What is the difference between America and Britain or France? What is the difference between the relationship between the United States and Russia or the United States and China?

Our diplomacy must be based on interaction with the whole world. Bad policies have brought us to this point and are putting more and more pressure on us.