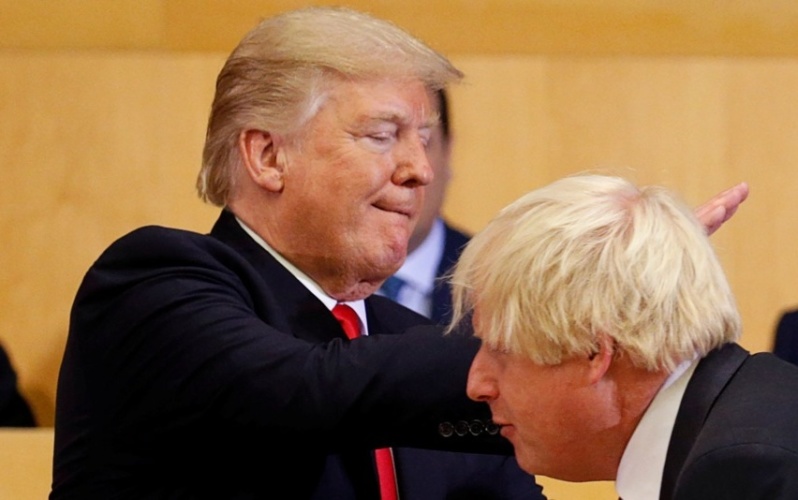 Dunn, Professor of International Politics at the University of Birmingham, is featured in the site’s examination of Johnson’s conversion from sound-bite critic of Trump — in 2015, he spoke of “”stupefying ignorance” and “unfit to hold the office of President” — to overseas BFF.

Later on as Foreign Secretary and when he’s PM, it suits his purposes to cozy up to Trump.

Similarly Trump saw him as someone who was a non-establishment and populist figure and it suits his purpose to court Johnson.

A Bond Between Opportunists

On the eve of his first visit to the UK in July 2018, Trump condemned May as weak in negotiations with the European Union over Britain’s Brexit departure. In contrast, he hailed Johnson as a potentially “great Prime Minister”. Meanwhile, former White House chief strategist Steve Bannon set up a London headquarters where he met Johnson’s representatives.

In early 2019, Trump and his advisors maintained the criticism of May and praise of Johnson, including through an opinion piece by Donald Trump Jr. in the Daily Telegraph. May was finally ousted in June 2019, with Johnson moving into 10 Downing Street seven weeks later.

Dunn explains, “The fact that Johnson was the perpetrator of Brexit endeared him to Trump in a way Theresa May never was.” He adds the personal dimension:

In [former US National Security Advisor] John Bolton’s memoirs, he talks about how frosty the phone calls were between May and Trump.

That was never a warm relationship, despite her efforts and the hand-holding when she went across when he was first elected, whereas there is [with Johnson] a degree to which there’s a bond in the personalities and a charismatic completely opportunist nature of both individuals in working with each other.

There are lines which Johnson cannot cross. He will not endorse Trump’s hostility towards NATO or follow the US departure, amid Coronavirus but prompted by Trump’s re-election campaign, from the World Health Organization.

But Dunn summarizes on the priority of similar attention-seekers:

These characters have many things in common and there’s a degree to which Trump especially looks on Johnson as someone who is a kindred spirit.

They both are driven by a sense of entitlement. Both grew up thinking that the office of state is something that they should always be entitled to if not aspire to.

Yet at the same time as that, while being part of the establishment and part of the elite, they saw themselves as outsiders, as unorthodox, as building their own brands rather than a corporate brand.