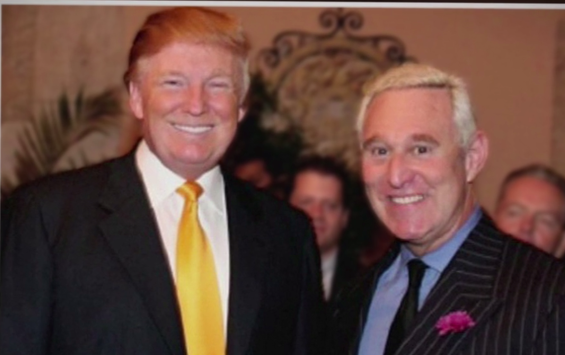 Donald Trump has commuted the prison sentence of his friend and key figure in the Trump-Russia scandal, self-professed “dirty trickster” Roger Stone.

Days after he tweeted, “LAW AND ORDER!”, Trump intervened over the 40-month sentence for Stone over seven felony crimes, including lying to Congress and witness tampering

Stone, who has worked with Trump for almost 40 years, was scheduled to report to a federal prison on Tuesday.

The dirty-tricks operative was involved with Trump in the promotion of conspiracy theories and smear campaigns, including a secret $1 million operation in 1999 to prevent Native American casinos that could rival Trump’s.

In 2016, Stone was the Trump campaign’s liaison with WikiLeaks as it published e-mails — obtained through hacking by Russian operatives — of Democratic nominee Hillary Clinton.

A White House statement repeated Trump’s Twitter derision of “overzealous prosecutors” in “witch hunts” and the “Russia hoax”: “He was treated very unfairly….Roger Stone is now a free man!”

But it stopped short of proclaiming Stone’s innocence, claiming that he should not have been prosecuted because there were no charges of a conspiracy between the Trump campaign and Russia. “Roger Stone has already suffered greatly,” it said. “He was treated very unfairly, as were many others in this case. Roger Stone is now a free man!”

The Mueller Report on Trump-Russia pointed to criminal activity, including Trump’s obstruction of justice. However, the Justice Department — led by Trump’s political ally William Barr, appointed in January 2019 — instructed Special Counsel Robert Mueller that no charges could be filed against a sitting President.

Trump’s protection of Stone comes as he is both trying to prevent prison sentences for other allies, notably former National Security Advisor Michael Flynn, and his removal of inspectors general, prosecutors, and law enforcement officials.

Last month Trump and Barr forced out Geoffrey Berman, the US Attorney for Southern New York whose office prosecuted Trump’s long-term lawyer and fixer Michael D. Cohen, investigating Trump’s current lawyer Rudy Giuliani, and looking at possible charges against the Trump Organization.
Trump called Stone on Friday to tell him of the commutation.

In an interview hours before the commutation, Stone implicitly acknowledged it would be for his refusal to give testimony against Trump:

He knows I was under enormous pressure to turn on him. It would have eased my situation considerably. But I didn’t.

The developments bore out the assessment in the Mueller Report that Trump’s public statements “support inference that president intended to communicate message that witnesses could be rewarded for refusing to provide testimony adverse to the President”.

Trump commuting Stone in exchange for Stone not rolling on Trump is of course a quid pro quo. Is it politically incorrect in these circumstances to remind people, maybe in a whisper, that the Constitution defines “Bribery” as a “high Crime,” automatically an impeachable offense?

Trump has wanted to pardon Stone, amid lobbying by his friends such as Fox TV polemicist Tucker Carlson and Rep. Matt Gaetz.

Rep. Adam Schiff, the chair of the House Intelligence Committee, summarized, “With this commutation, Trump makes clear that there are two systems of justice in America: one for his criminal friends, and one for everyone else,” said Representative Adam B. Schiff, Democrat of California and a leader of the drive to impeach Mr. Trump last year for pressuring Ukraine to incriminate his domestic rivals.

Rep. Jerry Nadler and Rep. Carolyn Maloney, respectively the chairs of the House Judiciary and Oversight Committees, said they will investigate the circumstances of the commutation: “No other President has exercised the clemency power for such a patently personal and self-serving purpose.”

Amid the attention to Trump’s ongoing abuse of power and attempt to bury his connections with the Russia scandal, some analysts see the commutation as a marker of Trump’s weakness four months before the November election.

Dr. Adam Quinn of the University of Birmingham, a specialist in US politics, summarizes:

Depressing as it is for justice and the law, my gut reaction is actually not that sad about this because it suggests Trump is in “I’m losing anyway, so f*** it” mode.

Reports are he wanted to do a full pardon and every single person in his administration and campaign wanted him to keep away from it. So the commutation is what they could talk him down to.

The fact that this is happening reflects the fact that even the most cynical people who want Trump to get a second term can only marginally restrain his political self-destructiveness.