Coronavirus — Another Florida Record as Biden Appeals, “Mr. President, Listen to Your Experts” 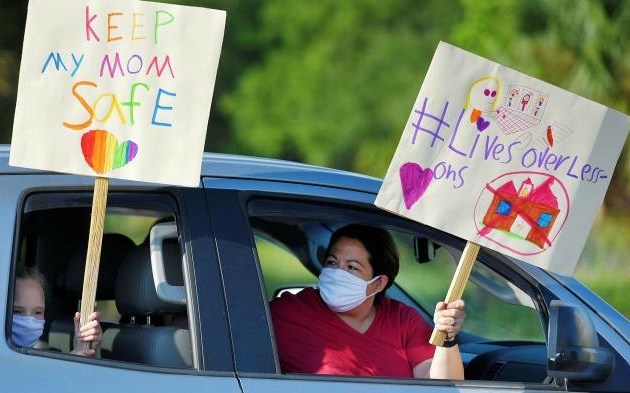 Florida has set another daily record for Coronavirus deaths, as infections rise in 46 of 50 states.

With US deaths at 136,466, Joe Biden appeals to Donald Trump, “Mr. President, please listen to your public health experts instead of denigrating them. Do your job.”

But Trump responds with the claim that he “saved millions of lives” despite his medical and public health advisors: “I was a crowd of one, because even experts didn’t want to do it. They thought it was a mistake.”

Florida reported 132 deaths on Tuesday, as mayors warned Gov. Ron DeSantis, a Trump ally who followed the command for a quick “reopening”, that local officials are running out of time to avoid a lockdown.

Miami Mayor Francis Suarez said, “There is a significant amount of pressure for us to shut down. We have between one week and four weeks to get this thing under control, or we will have to take some aggressive measures.”

“We have to have a greater sense of urgency,” said Miami Beach Mayor Dan Gelber.

DeSantis said, “People are apprehensive,” but he balk at announcing any renewed steps, including a mandatory order to wear masks in indoor public spaces.

Last week Florida set a US record — and the fourth-highest total in the world — of 15,388 daily cases. It is now third behind New York and California. After escaping the initial deadly wave of the virus, the state has now recorded 4,409 fatalities.

Alabama, Oregon, and Utah set one-day records for deaths. The US seven-day average is now about 725, compared with 500 at the start of July.

Opening a Tuesday speech with his plan for environmental protection and economic renewal, Biden called on Trump to abandon an all-out “reopening” in defiance of medical and public health guidance, including White House experts.

We won’t be able to turn the corner and get American people back to work safely without presidential leadership. Mr. President, open everything now isn’t a strategy for success. It’s barely a slogan. Quit pushing the false choice between protecting our health and protecting our economy. All it does is endanger our recovery on both fronts.

He then implicitly addresses Trump’s derision of Dr. Anthony Fauci, the White House’s top infectious disease expert, including a block on Fauci’s appearances on US TV:

Trump, stung by media attention to Biden, launched into a lengthy tirade during his 63-minute, hastily-arranged White House appearance. He assailed the Democratic nominee, House Speaker Nancy Pelosi, State governors, and his experts as he complained, “If we didn’t test, you wouldn’t have all the headlines because we’re showing cases.”

He continued portraying himself as the victim, failing to get credit for the “millions” he has supposedly saved. Ignoring the renewed surge in deaths, he repeated the lie of a drop in fatalities by more than 90%:

Trump lies and says, "if we did half the testing, we'd have half the cases… the cases are created b/c of the fact we do tremendous testing"

In fact, those Covid cases would exist even without testing. People would still be getting sick and dying. Testing does not create them. pic.twitter.com/ht4Yv080ty

Trump returned to the tactic of linking Biden and China as the enemies blocking his supposed management of the crisis. Defying coherence, he said:

Joe Biden didn’t just side with China on the virus. He did. He called me again, xenophobic. That’s what he said. You all heard it many times. He described the rise of China as “a very positive development”. It’s not a positive development. Not for us it’s not. He said that the idea that China is our competition is really bizarre. He’s really bizarre. He said, “China is not a problem.” No, nobody’s ripped us off more than China over the last 25, 30 years, nobody close. And he says China is not a problem. Now he takes it all back. Now he wants to be Mr. Tough Guy.

And then Trump repeated his dismissal of medical and public health advice: “We have to get the schools open. We have to get everything open.”

Projecting his own focus on re-election, he added, “A lot of people don’t want to do that for political reasons, not for other reasons.”

But even as Trump spoke, the Administration was retreating. Facing court action, it withdrew the threat to deport international students pursuing online-only instruction at US universities in the autumn.