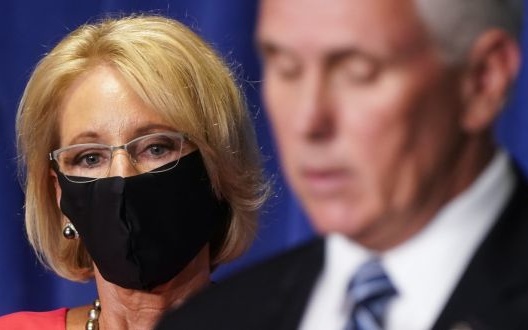 On Tuesday, the US set its 7th daily record in 10 days, with an increase of 60,021. Cases are rising in 45 of 50 states, with surges of more than 60% over two weeks in 20 of them. At least five states — Missouri, Texas, Tennessee, Utah and West Virginia — set single-day records on Wednesday.

But Trump’s Twitter demand from Monday — “SCHOOLS MUST REOPEN IN THE FALL! — continued yesterday with the declaration: “In Germany, Denmark, Norway, Sweden and many other countries, SCHOOLS ARE OPEN WITH NO PROBLEMS.”

Trump then assailed the guidelines of the Centers for Disease Control and Prevention:

I disagree with @CDCgov on their very tough & expensive guidelines for opening schools. While they want them open, they are asking schools to do very impractical things. I will be meeting with them!!!

He added the threat of a cutoff of Federal funds to states if they did not bow to his demand.

Well, the president said today, we just don’t want the guidance to be too tough. That’s the reason why next week, the CDC is going to be issuing a new set of tools, five different documents that will be giving even more clarity on the guidance going forward.

Neither Trump nor Pence offered any indication of what steps the schools could take to ensure safety.

What is not the intent of CDC’s guidelines is to be used as a rationale to keep schools closed….It’s guidance; it’s not requirements.

Asked about Trump’s threat to cut Federal funding to schools that do not reopen, Pence evaded the question: “What you heard from the president is just a determination to provide the kind of leadership from the federal level that says we’re going to get our kids back to school.”

Wednesday’s episode was the second in which Trump has publicly berated the CDC as, driven by his priorities of the stock market and re-election, he insisted on “re-opening” the US.

In early May, the Administration blocked CDC guidance to schools, businesses, churches and other establishments. This included recommendations such as disposable dishes and utensils at restaurants; closure of every other row of seats in buses and subways; restriction of transit routes in areas of significant Coronavirus infection; and separation of children at schools and camps.

Trump justified his burial of medical expertise with the response to the question, “Will the nation just have to accept the idea that by reopening there will be more death?”:

We have to be warriors. We can’t keep our country closed down for years.

Trump has stepped up his attacks on White House advisors, demanding “re-opening” even with the record surge in cases.

On Tuesday, as he formally withdrew the US from the World Health Organization, Trump tried to sweep Dr. Anthony Fauci, the White House’s top infectious disease expert.

Fauci, defying a White House ban on interviews with US TV, has used Congressional hearings, webcasts, and statements to foreign outlets to warn of a “very disturbing” death toll with the US “still in the first wave” of the virus.

Trump, who insists Coronavirus “will sort of just disappear”, said on Tuesday, “I think we are in a good place. I disagree with him.”

But even as Trump issued his latest commands, State and local authorities again took the responsibility of pursuing practical measures for health and safety.

New York City Mayor Bill de Blasio said classroom attendance in New York City will be limited to one to three days a week this autumn, with no more than a dozen people in a classroom at a time.

De Blasio said he will make the decision whether to reopen school premises during the first week of August.

At the level of higher education Harvard University and the Massachusetts Institute of Technology sued the Trump administration in federal court on Wednesday, after Immigration and Customs Enforcement threatened to deport any foreign student taught through online-only classes.

Harvard said at the start of the week that all autumn instruction will be online, although up to 40% of students may live on campus.

Fauci summarized in a podcast on Wednesday: “Any state that is having a serious problem, that state should seriously look at shutting down. It’s not for me to say, because each state is different.”

The risk of Trump’s election-driven approach were made clear on Wednesday by the top health official in Tulsa, Oklahoma, who said Trump’s failed June 20 rally probably led to a surge of Coroanvirus in the city.

The past two days we’ve had almost 500 cases, and we know we had several large events a little over two weeks ago, which is about right. So I guess we just connect the dots.

Asked if contact tracing confirmed a link between the rally and the surge, Health Department spokeswoman Leanne Stephens, replied, “[We] will not publicly identify any individual or facility at risk of exposure, or where transmission occurred.”

Dart urged the Trump campaign to cancel the rally at the 19,199-seat Bank of Oklahoma Center arena.

The event was an embarrassment to the campaign, with only 6,800 seats filled; however, many in the audience did not wear masks, and the campaign scrapped all social-distancing guidelines, to the point of removing warning stickers from chairs.

On Tuesday, Oklahoma’s seven-day case average rose to 495. A month earlier, it was 92.