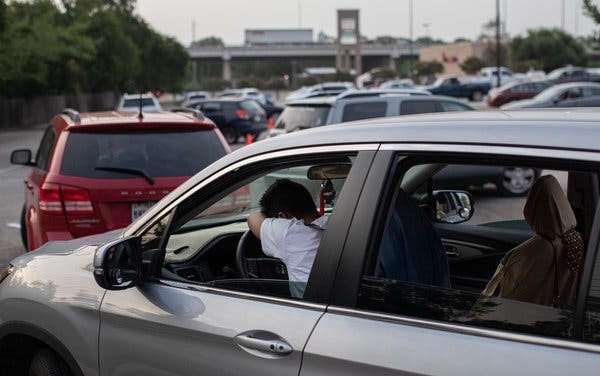 State and local leaders, facing a surging Coronavirus, say the Trump Administration is refusing to help amid Donald Trump’s insistence that the virus “will soon disappear”.

In Arizona, which has spiked to the 7th-highest caseload, Phoenix Mayor Kate Gallego said on Sunday that the Federal Emergency Management Agency rebuffed her pleas for help with testing.

Gallego said it felt like the Trump Administration is “declaring victory while we’re in crisis mode”: “We are the largest city not to have received this type of investment. And you can see it in the increasing rate of positives.”

The mayor said positive tests should be about 2%, but in Arizona are now more than 20%.

An aide to the mayor said FEMA told the city and Maricopa County officials that the agency is “getting out of the testing business”.

Cases have doubled in Arizona within weeks, with more than 3,400 new cases on Sunday taking the total to 98,103. On Saturday, there was a record of 3,182 hospitalizations for confirmed and suspected infection.

I hope they understand what it’s like out here. I wish I could have the President with me as people fill their cars with gas so they can wait in lines for eight hours, while they’re sick and it’s 110 degrees outside,” to get a test.

This is not just a Phoenix problem. I think many communities and people across both parties would like to see the federal government play a role.

Vice President Mike Pence said, on a visit to Phoenix on Wednesday, that testing was readily available. But an Administration official said the city should work through the state to get help.

Gallego said of Donald Trump’s insistence on holding a rally in Phoenix on June 23:

Trump was in my community, chose not to wear a mask. He’s having large events while I am trying to push people, “You need to stay at home.”

Texas Hospitals Running Out of Beds

In Houston, Texas, medical staff at Lyndon B. Johnson Hospital ran out of beds and a key drug this week. A dozen Coronavirus patients in need of intensive care waited in the emergency room, awaiting transfers to other area hospitals.

Austin Mayor Steve Adler said, “If we don’t change the trajectory, we are within two weeks of having our hospitals overrun,” with intensive care units possibly at capacity within 10 days.

Texas (80% increase over 14 days) broke its record for daily cases several times last week and is now 4th in the US behind New York, California (84%), and Florida (158%). A record 8,181 patients were hospitalized this weekend.

Gov. Greg Abbott, a Trump ally, began reversing course 10 days ago. He has reimposed some closures and mandated the wearing of masks in public in most counties.

But Lt. Gov. Dan Patrick has rejected the need for any precautions. He said of the White House’s top infectious disease expert Dr. Anthony Fauci, who warned this week of a “very disturbing death toll” with the US “going in the wrong direction”.

Public health specialists, including Administration officials, were busy Sunday dealing with Trump’s declaration that 99% of Coronavirus cases are “totally harmless”.

Dr. Scott Gottlieb, the former Food and Drug Administration officials, said, “Certainly more than 1% of people get serious illness” if infected. He estimated, that even counting asymptomatic infections, between 2% and 5% of cases require hospitalization.

Dr. Stephen Hahn, the current FDA commissioner of the Food and Drug Administration, tried to avoid the question while refusing to back Trump: “I’m not going to get into who is right and who is wrong.”

Carlos Giménez, the Republican mayor of Miami, Florida, bluntly said, “The virus is not harmless.” He noted that positive rates in the state are now above 20%, as daily cases records were set throughout the past 10 days.

Jha said improvements in care have contributed to the decline, and he noted that more of the infections are of younger people who are less likely to be severely affected.

However, he warned, “By the time somebody gets infected, it takes a couple weeks before they get hospitalized and get really sick, and another week or 10 days before they die.”

Up to 15% to 20% of Coronavirus patients may require hospitalization. Of those admitted, 15% to 20% are transferred into intensive care.