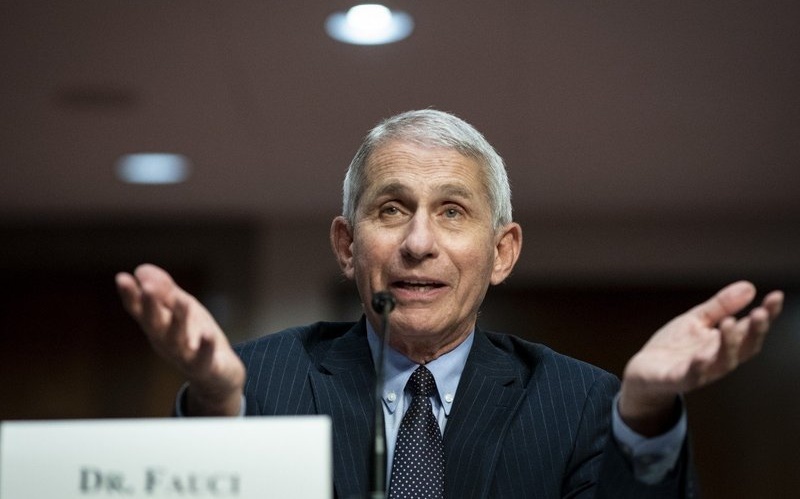 As Coronavirus cases spike in 36 of 50 US states, the White House’s top expert Anthony Fauci warns that the death toll “will be very disturbing” with the possibility of 100,000 cases per day.

Confirmed cases are now 2,634,432, with another increase of about 40,000. Eight states, including California, Texas, and Arizona, set daily records.

Fauci (pictured) told a Senate committee on Tuesday that the US is “going in the wrong direction” after many State governors, following Donald Trump’s command and defying medical advice, quickly reopened businesses, restaurants, bars, gyms, beaches, and other public spaces.

He responded to Sen. Elizabeth Warren, who noted that Fauci had said in May the country was heading in the “right direction”:

The doctor, who has been sidelined by Trump since last month, took apart the Monday declaration of White Press Secretary Kayleigh McEnany that the virus has been reduced to “embers”.

He warned, “I would not be surprised if we go up to 100,000 [cases] a day if this does not turn around….What we’ve seen in several states are different iterations of [reopening], perhaps maybe in some, they’re going too quickly and skipping over some.”

The Deputy Director of the Centers for Disease Control and Prevention, Dr Anne Schuchat, emphasized that “this is really the beginning” of the outbreak.

The US set a 48-hour record of more than 90,000 cases on Sunday and Monday. Asked about the spike, Fauci summarized:

The numbers speak for themselves. I’m very concerned, I’m not satisfied with what’s going on, because we’re going in the wrong direction. Clearly we’re not in total control.

Schuchat pointed to a central failing of the Trump Administration’s response, the lack of a trace-and-track system:

We’re not in the situation of New Zealand or Singapore or Korea, where a new case is rapidly identified and all the contacts are traced, and people are isolated who are sick, and people who are exposed are quarantined and they can keep things under control.

She estimated that the true figure of Coronavirus infection in the US is about 20 million people: “We have way too much virus across the country for that right now.”

Republicans on the committee began to push back on Donald Trump’s dismissal of the situation.

The chair, Sen. Lamar Alexander, urged Trump to end his refusal to wear a mask:

This small, life-saving practice has become part of the political debate that says, if you are for Trump you don’t wear a mask and if you are against Trump you do….

The President has plenty of admirers, they would follow his lead and it would help in this political debate; the stakes are too high for this to continue.

Research by the University of Washington estimates that more than 30,000 deaths will be avoided by October if 95% of Americans wear masks in public.

But Trump said nothing about the crisis amid dozens of tweets and retweets on Tuesday about Joe Biden, the media, and “Anarchists”. He merely retweeted a declaration by a supporter, “Thanks to unprecedented action by President @realDonaldTrump the United States leads the world in coronavirus testing!”

The European Union had a far different message: as it reopens its borders to travelers today, American residents are not on the list.