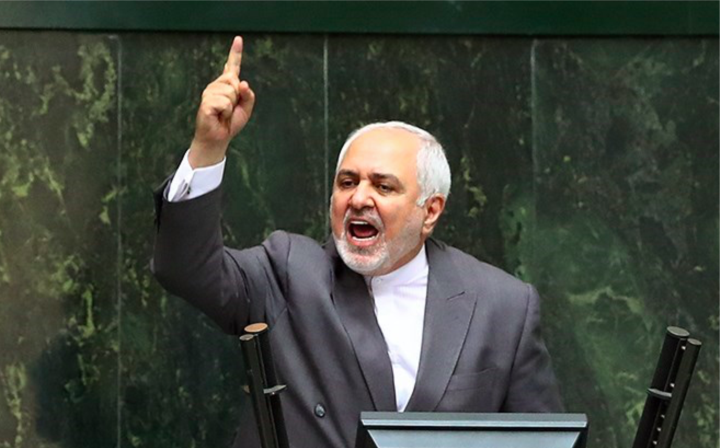 Zarif’s speech on Sunday was repeatedly interrupted by booing and shouts of “liar”.

The Foreign Minister responded with the declaration that he had worked closely with Maj. Gen. Qassem Soleimani, the Iranian commander assassinated by a US drone on January 3, and that he the support of the Supreme Leader:

He appealed to the legislators, “We are all on the same boat,” saying the Trump Administration is hostile to Iranians across the political spectrum.

Listen to Iran's Foreign Minister, @JZarif defending himself in parliament today while being berated by lawmakers.
Zarif: I coordinated everything with Soleimani/the Supreme Leader knew about my lies/"We are all on the same boat".

– And this boat is going to sink very soon. pic.twitter.com/CXICdzw3qu

Zarif’s explanation is unlikely to have satisfied his critics. More than 200 MPs have tabled a motion to question President Hassan Rouhani.

Hardliners took control of Parliament in February elections, marked by the lowest turnout i the Islamic Republic’s history. They stepped up the challenge to the Government two weeks ago, with the new Speaker, Mohammad Baqer Qalibaf, criticizing Communications and Information Technology Minister Mohammad Javad Azari Jahromi.

Qalibaf, the former Tehran Mayor who failed to win the Presidency in 2005 and 2013, is reportedly planning another run next year. He started his tenure as Speaker in May by chiding the Government’s economic record.

Some MPs have written on social media that Oil Minister Bijan Zanganeh will be assailed when he appears before the Majlis to defend contracts. Critics claim an agreement with Turkmenistan led to payment of large penalties, prompting Zanganeh’s denial.

A Controversial Deal with China

MPs chided Zarif on Sunday about a draft 25-year contract with China, complaining that they were not consulted by the Government.

Zarif said the contract was discussed during a meeting between the Supreme Leader and visiting Chinese President Xi Jinping in 2015: “One of the most significant provisions of the contract is returning Iran to [China’s] Silk Road Project.”

He said, “We shall declare it when the contract is finalized.”

Critics have argued that China, despite being Iran’s largest customer, will exploit Tehran under the terms of the deal. On Sunday, the chair of Parliament’s National Security and Foreign Policy Committee, Mojtaba Zolnour, noted that Iran did not have an ambassador in Beijing for some time.

He told Zarif, “If you did not abandon relations with China in the past, Iranians would not have to undergo this much of economic pressures.”

Iran is in the midst of economic crisis, amid long-term structural problems, US sanctions, and a drop of up to 95% in oil exports.

Production, investment, and employment are in decline. Inflation is above 40%. Exports to China have fallen 53%, compared to a year ago, and trade with neighboring Turkey is down 70%.

The Iranian currency has collapsed to an all-time low, falling 45% since March. On Monday morning, the rial stood at 222,100:1 v. the US dollar.