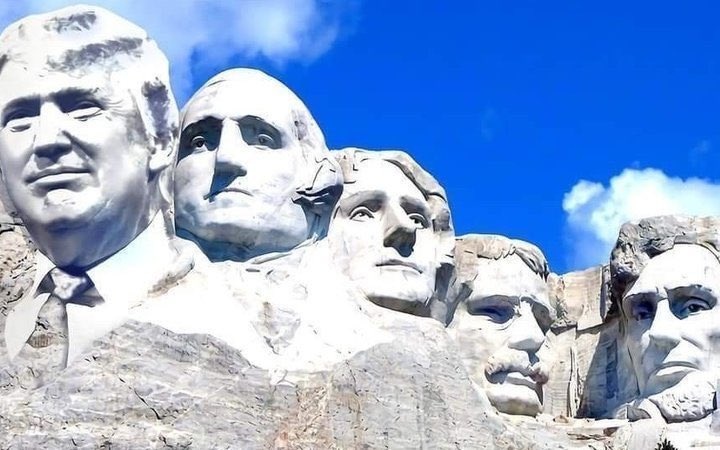 The US sets a sixth record in nine days for daily Coronavirus cases, as the death toll closes on 130,000.

Donald Trump gives up any pretence of dealing with the crisis. Instead he travels to Mount Rushmore in South Dakota to deliver a speech, promoting a culture war against his constructed enemy of “a new far-left fascism”.

The virus reached the Trump family on Friday. Kimberly Guilfoyle, the girlfriend of Donald Trump Jr., tested positive. She traveled with the Trump entourage for the Mount Rushmore speech.

“Go Back Where You Came From”

As many states roll back the lifting of Coronavirus restrictions, Independence Day fireworks celebrations were cancelled in many communities.

But Trump, who denied the threat for months, maintained on Wednesday that the virus “will sort of just disappear”. He insisted that the Mount Rushmore event must proceed, without social distancing and with few in the audience wearing masks.

The military as well as local police were deployed against anti-Trump demonstrators, with threats to use noxious gas.

A warning from police: pic.twitter.com/peK1S6hLiu

Meanwhile, a group of Trump supporters stood near Mount Rushmore, built in the Black Hills on land sacred to the Lakota Sioux. They chanted at Native American protesters, “Go back where you came from.”

Trump said little about Coronavirus, despite the surge and the condition of his son’s partner Guilfoyle.

Instead, he tried to verbally quash the anti-racism marches after the May 25 murder of George Floyd at the hands of police.

Angry mobs are trying to tear down statues of our founders, deface our most sacred memorials, and unleash a wave of violent crime in our cities….

The speech continued the re-election tactic of dividing Americans into Trump’s “base” v. supposed enemies. The approach, in sharp contrast to the consensus politics of most successful Presidential candidates, worked in 2016. However, it has been beset this year by the pandemic and by more than 80% support for the Black Lives Matter marches.

Some Trump advisors, including his son-in-law Jared Kushner, have advised a speech seeking unity. But Trump and other advisors have rejected that option and stuck with the antagonism in public appearances and on Trump’s Twitter feed.

On Saturday, in defiance of federal health guidelines, the Trump camp will stage a “Salute to America” on the South Lawn at the White House, with a military flyover and the launch of 10,000 fireworks on the National Mall.