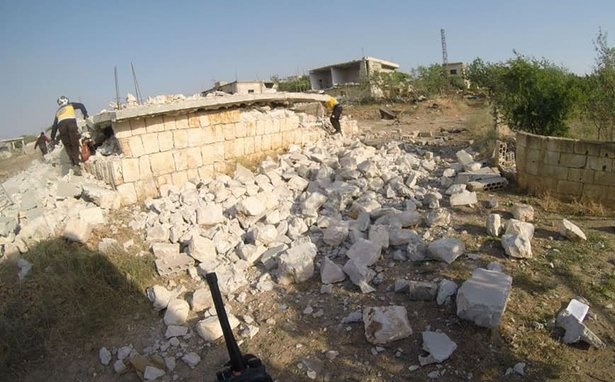 The Syria Response Coordination Team said 38 locations were targeted over 24 hours, with 5,834 people fleeing the area.

A civilian was killed and 8 others, including 5 children and a woman,were injured this morning,June 9, as a result of Russian air strikes targeting civilian homes in the town of #Billion, Jabal al-Zawiya,south of Idlib,with three air strikes as residents prepared for displacement pic.twitter.com/sNWJsFQXsR

Russia has broken the 3 1/2-month ceasefire in northwest Syria for the second time in six days.

At least two civilians were killed and three wounded in Russian raids on several opposition-held villages in Idlib province, according to White Helmets rescuers and activists.

Last Wednesday Russia carried out its first strikes since early March, bombing the al-Ghab Plain at the junction of the Idlib, Hama, and Latakia Provinces. There were no injuries, but hundreds of civilians fled their homes and moved north.

The offensive seized almost all of northern Hama Province and parts of south and east Idlib, killing about 2,000 civilians, wounding thousands, and displacing more than 1 million.

Monday’s attacks were on the al-Ghab Plan and on the mountainous Jabal al-Zawiya region in southern Idlib Province. The victims were killed in their home in the town of al-Maourzeh.

Russia again offered no explanation for its violation of the agreement with Turkey. The Turkish Government also made no comment.

However, pro-opposition activists said the chain of events began with recent pro-Assad shelling of villages in the al-Ghab area. Anti-Assad forces, including the Huras al-Din faction, retaliated with raids on two villages. Russia then carried out its airstrikes.

The anti-Assad fighters withdrew under the bombardment by Russian warplanes and artillery. The local activists said one fighter and 16 pro-Assad troops were killed.

The White Helmets also reported shelling by pro-Assad forces of the town of Qastoun, west of Hama city.

#Syria: Depressing pictures of civilians once again fleeing fighting in Idlib – this time from villages in the Jebel al-Zawiya region (south of the M4 highway) in southern Idlib pic.twitter.com/rszowZipvO