Loneliness, Coronavirus, and the Baba Business 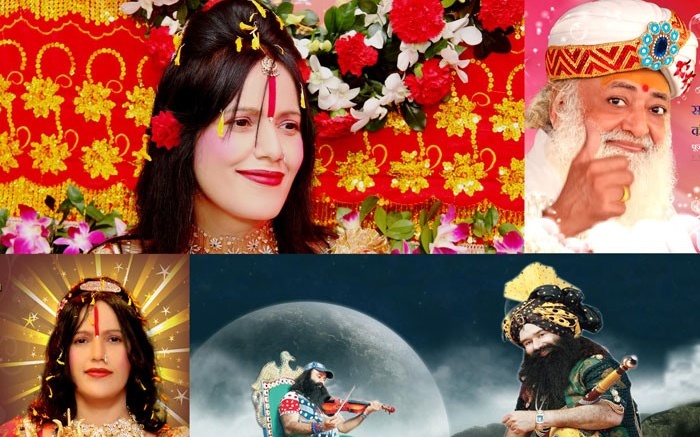 (Clockwise from Top Left) Radhe Maa, Asaram Bapu, Gurmeet Ram Rahim: “In the market of believers, there is high demand for the assurance of inner peace and stability”

”Radhe Maa” (Mother Lord, real name Sukhwinder Kaur) dresses up exquisitely, adorning herself with intricate and elaborate jewelry at all times. She wears makeup that would put a newlywed bride to shame.

The self-proclaimed “godwoman” is kissed on the hands and cheeks by her followers. There are millions of them, including politicians and international celebrities such as Britney Spears, who believe her to be the incarnation of a Hindu goddess.

As lockdown measures amid Coronavirus feed loneliness and uncertainty, domestic violence and mental health issues have escalated exponentially. This labyrinth of human emotional needs looks for a cure – someone and something who can provide them with certitude in this uncertain world.

That’s where these “Baba” business empires come to the rescue, with more online “balm” sessions than ever.

Karl Marx said, “Religion is the opium of people,” and “Babas” are the latest drug. Humans across ages have partaken in rituals, sacrifice and prayer in hopes of making their lives a little less insufferable. These “Babas” have gone beyond the church to issue pseudo-scientific mantras for effects on mind and body.

Relieve Stress and Anxiety, Build Up Your Inner Resilience, Calm Your Mind: These are the mantras. Having established a global network of brick-and-mortar branches, these organizations have “highly-trained” teachers who would guide the participants through certain techniques of breathing, a change in daily routine, “positive” and spiritual thoughts, all promising a 360-degree life transformation.

Their fertile ground is loneliness. A 2018 BBC experiment revealed a high level of mental health issues in younger people, with patterns in almost every country in the 237 surveyed.
In their daily grind of work, many people lacked quality time for self. Detached from family support network and facing the obsolete concept of an eternal life partner, many discovered solace in self-realization courses which, in their words, provided inner exuberance and equanimity.

Each year millions across the globe attend paid courses of stress-relieving meditation and spiritual techniques. Art of Living by Sri Sri Ravi Shankar, Inner Engineering by Sadhguru, Osho International meditation courses, and Scientology charge and soothe a million of inquisitive souls. Through a combination of believers and millions of active social media subscribers globally, homes and conscience of several wealthy patrons are commanded by them. They “soft” endorse political parties and have earned the reputation of mystic with the most powerful. They appeal to every generation, with CEOs, bankers, and affluent personalities renouncing their professional careers to become full-time volunteers.

Without investing huge sums of money in advertisements, these businesses are constantly increasing their clientele. There is a sense of soft, continuous badgering of followers to bring in more. And therein lie tensions.

“I eventually parted ways with a dear friend of mine as he continually kept on pestering me even during informal family gatherings, to join one of these courses,” says Geetanjali Iyer. “Once you get associated with any of the followers, they will keep inadvertently keep on mithering you to join the courses out of which they seem to have benefittd – and in this conundrum lies the vicious circle.”

Then there are accusations of serious crimes by Godwomen and Godmen. Asaram Bapu was found guilty of raping a minor girl and is presently serving life imprisonment. His associates and followers are accused of murdering witnesses. Gurmeet Ram Rahim Singh is alleged to have castrated followers. Radhe Maa is said to have incited dowry demands among her followers.

But there are contrasting examples. In October 2014, a Columbian delegation visited spiritual leader Sri Sri Ravi Shankar, requesting him to intervene in the peace process. After several preliminary discussions, Ravi Shankar traveled to Bogotá and Havana. In 2015, he met with the leading UN official and with victims of the conflict in Bogotá. He traveled to Havana for talks with the Delegation of the FARC insurgency, inviting them to embrace Gandhian non-violence.

In June 2015, the Colombian Government and FARC announced a final ceasefire to end clashes within a year. FARC leader Iván Márquez thanked Ravi Shankar and Art of Living for fostering the agreement.

Another highly-revered guru, Swami Ramdev, has a prolific record of curing people via his herbal and ayurvedic medicines and yoga techniques. His range of ayurvedic and natural products, Patanjali, quickly captured a major share of the market, competing with long-standing brands.

And Jaggi Vasudev, better known as Sadhguru, is famous for philanthropy and spiritualism as a prolific speaker and author, working harmony between body, mind, and spirit. He has millions of diligent followers across the globe, with meditation sessions in various countries all year round.

“A Solution for the Rupture”

Indian societies are in transformation because of urbanization. In other countries, these changes have pushed people to either psychiatrists or alcoholism/drugs. In India, the recourse is to solace from spiritual leaders.

Many question the product offered by the Baba business. But in the market of believers, there is high demand for the assurance of inner peace and stability. The Gross National Product is measured by an individual happiness.

Everyone who derides the followers of godmen for their superstition is getting the diagnosis wrong. It’s not superstition that drives people to believe. They are looking for a solution to the rupture inside them….

To the follower, the Godman is not a gaudy character. This is someone who can be banked upon to provide solace to the conundrums of life.