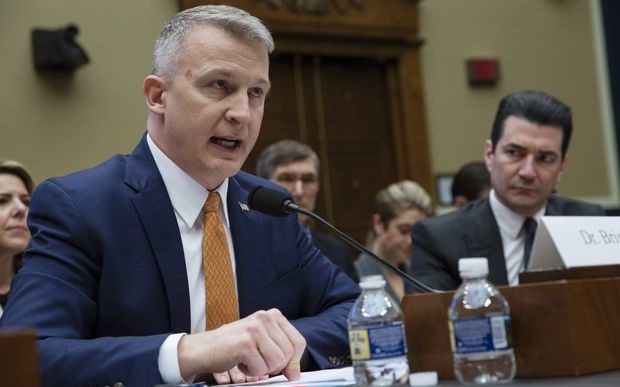 Dr. Rick Bright, who led the US Government agency developing a Coronavirus vaccine, says he was fired after demanding rigorous vetting of hydroxychloroquine, the anti-malaria drug pushed by Trump as a “wonder cure” for the virus.

Bright was abruptly dismissed this week as director of the Department of Health and Human Services’ Biomedical Advanced Research and Development Authority. He was also removed as the Deputy Assistant Secretary and placed in a lower position at the National Institutes of Health.

In a statement, Bright said he was pressured at HHS to direct money toward hydroxychloroquine, which Trump began promoting — falsely saying it had been approved by the Food and Drug Administration — in mid-March.

The White House’s top medical advisors, including Dr. Anthony Fauci, have emphasized that there is only anecdotal evidence of the drug’s effectiveness and that no rigorous studies have been conducted.

This week a US Department of Veterans Affairs study, found that 368 patients with severe Coronavirus showed “no evidence” of reduced risk of death or ventilation after hydroxylchlroquine was administered.

A small trial in Brazil was halted in mid-April after some patients developed irregular heart rates — a side effect of hydroxylchloroquine which doctors noted as Trump said on April 4, “I’ll say it again: What do you have to lose? Take it.”

This week experts at the National Institute of Allergy and Infectious Diseases said there was “insufficient data” to recommend any treatment with the drug.

Science Over “Politics and Cronyism”

Bright, labeling hydroxylchloroquine as one of several “potentially dangerous drugs promoted by those with political connections”, wrote of his dismissal:

I believe this transfer was in response to my insistence that the government invest the billions of dollars allocated by Congress to address the Covid-19 pandemic into safe and scientifically vetted solutions, and not in drugs, vaccines and other technologies that lack scientific merit.

I am speaking out because to combat this deadly virus, science — not politics or cronyism — has to lead the way.

Trump and Fox TV, whose “doctors” and commentators have pushed hydroxylchloroquine since March 14, have been less vocal in recent days amid the negative studies.

But Trump still put out false information on Tuesday, “Obviously there have been some very good reports,” before edging back, “Perhaps this one’s not a good report, but we’ll be looking at it.”

On Wednesday, asked if Bright was removed because of his assessment, Trump covered up: “Maybe he was and maybe he wasn’t; I don’t know who he is.”

Trump caused further confusion on Wednesday by suddenly halting his insistence on “re-opening” the US with the lifting of stay-at-home orders.

Trump gave no reason for his sudden opposition and muddied waters further by saying of Kemp: “At the same time, he must do what he thinks is right.”

A “source familiar with the call” said Trump and Vice President Mike Pence each phoned Kemp on Tuesday night to give support and complimented Kemp on his performance.

But public health officials and mayors of Georgia’s largest cities such as Atlanta, Savannah, and Albany have roundly condemned the easing of the orders. The mayors said they were not consulted before Kemp’s announcement earlier this week.

The governors of South Carolina and Tennessee have also announced the lifting of some restrictions on businesses and, in South Carolina’s case, gatherings on beaches.

Tweeting after Trump’s reversal on Wednesday, Kemp praised Trump for his “bold leadership and insight” while sticking to his decision.

Our next measured step is driven by data and guided by state public health officials. We will continue with this approach to protect the lives – and livelihoods – of all Georgians. (2/3) #gapol