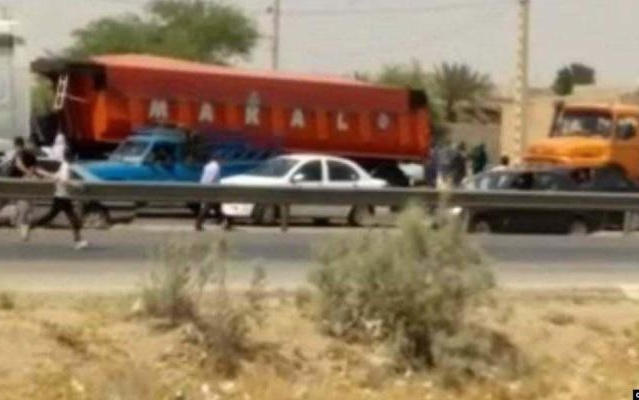 In a rare acknowledgement of violent repression of demonstrations, a representative of Iran’s Supreme Leader has apologized for the shooting of a protester with a plastic bullet on Saturday.

The young man was among those shot by security forces in Khuzestan in southwest Iran, amid protests over the lack of drinking water.

Seyed Abdolnabi Mousavifard, Ayatollah Khamenei’s representative, was shown on video visiting the families of the injured.

He said to relatives of one victim, “I’m here to apologize to this young man.”

Photographs of the young man had circulated widely on social media, putting pressure on Iranian authorities.

There have been recurrent protests in Khuzestan, one of the centers of Iran’s oil industry, over water shortages.

On Saturday, security forces fired tear gas and plastic bullets into a crowd of residents in the Gheizaniyeh district, 45 km (28 miles) from the provincial capital Ahvaz. The protesters had gathered in front of the district governor’s office and blocked a road.

The Ahvaz police commander claimed his officers had to fire the plastic bullets when they were attacked with stones and sticks.

On Monday, President Hassan Rouhani instructed the Energy Minister of Energy and Khuzestan Governor Gholamreza Shariati to take immediate measures to resolve the problem of drinking water. Shariati apologized to residents and promised a solution within two weeks.

Last November, Iran’s security forces killed at least 304 protesters over four days, according to a detailed report from Amnesty International. Many of the victims were shot at close range, some in the back while fleeing.

The demonstrations were sparked by the Government’s sudden 50% to 200% rise in petrol prices, but soon took up long-standing complaints about Iran’s serious economic situation.

See Iran Daily, May 21: US Sanctions Officials Over November’s Killing of Protesters