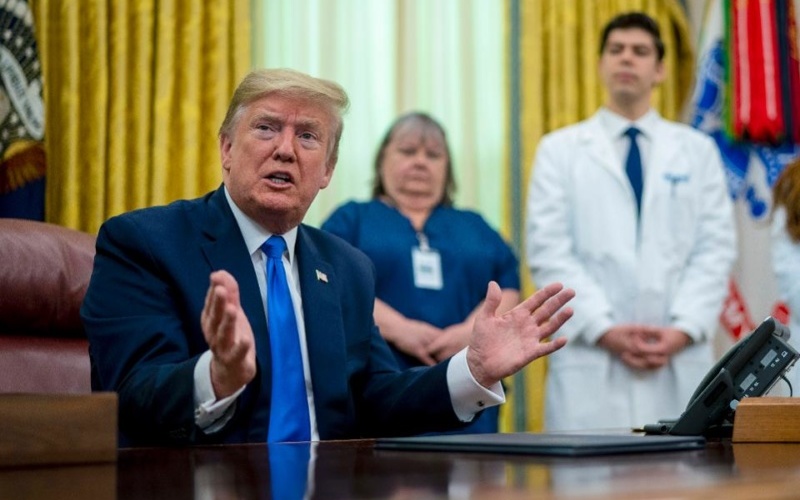 Donald Trump speaks to reporters in the White House, May 6, 2020 (Doug Mills/Getty)

But with his priority on lifting stay-at-home restrictions, Trump has chafed at the medical advice from the Task Force that a quick reopening will bring an even deadlier resurgence of the virus.

So on Tuesday both Vice President Mike Pence and Trump indicated the 22-member group, coordinated by Dr. Deborah Birx and including top infectious diseases expert Dr. Anthony Fauci, would be wound up by Memorial Day at the end of May.

Because of this success, the Task Force will continue on indefinitely with its focus on SAFETY & OPENING UP OUR COUNTRY AGAIN. We may add or subtract people to it, as appropriate. The Task Force will also be very focused on Vaccines & Therapeutics.

Later Trump made another concession, assuring that Birx and Fauci would continue to serve on the Task Force.

Fauci has used interviews to push back Trump’s disinformation and to challenge any quick lifting of stay-at-home and social distancing guidance.

In a rare moment of honesty, Trump acknowledged that he retreated because of public criticism:

Pence, who nominally heads the group, said, “I think we’re having conversations about that and about what the proper time is for the taskforce to complete its work and for the ongoing efforts to take place on an agency-by-agency level.”

But even amid his retreat, Trump reiterated on Wednesday that his priority is on the economy over lives.

He told reporters, as a group of nurses came to the Oval Office:

JOHN ROBERTS: Will the nation just have to accept the idea that by reopening there will be more death?

TRUMP: "We have to be warriors. We can't keep our country closed down for years … hopefully that won't be the case, John, but it could very well be the case." pic.twitter.com/GgJRW3FX9b

In the Wednesday photo opportunity, Trump repeated false statements about the status of Coronavirus testing. When a nurse gently explained the reality of dealing with the virus, amid shortages of personal protective equipment, Trump rebuked her:

Trump rebukes a nurse who says "PPE has been sporadic, but it's been manageable."

"Sporadic for you, but not sporadic for a lot of other people," Trump replies. "That was fine, but I have heard we have a tremendous supply to almost all places." pic.twitter.com/zOf2rWxvHx

Meanwhile, White House Press Secretary Kayleigh McEnany contradicted Trump’s declaration on Tuesday that “everyone” in the US can now be tested for the virus.

“The notion that everyone needs to be tested is simply nonsensical,” she said.

The White House’s medical advisors have said that at least 500,000 daily tests are needed for any lifting of restrictions. Some medical experts put the number at 5 million.

But amid shortages and distribution problems, testing has plateaued at about 200,000 tests per day.