Syria Daily: UN Envoy Calls for Russia-US Push for Peace — Is Anyone Listening? 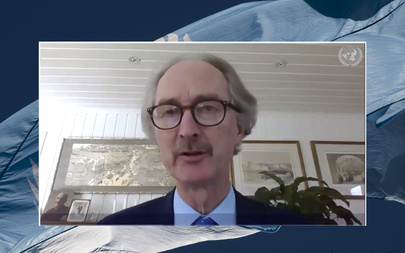 UN envoy for Syria Geir Pedersen has called on Russia and the US to pursue peace in the country’s nine-year conflict, but without any detail on steps to reach the goal.

Pedersen told the Security Council on Monday that too many “fleeting opportunities to turn dynamics towards a political path were lost”, with “missed moments…followed by renewed violence and a hardening of positions”.

He also cited the prospect of a Coronavirus outbreak in the country.

With some calm, with the common threats of COVID and ISIS, and with the Syrian people continuing to suffer, I want to stress that renewed and meaningful international cooperation, building trust and confidence between international stakeholders and with Syrians…is essential.

I believe that Russian-American dialogue has a key role to play here, and I encourage them to pursue it.

Russia’s military intervention in September 2015, saving the Assad regime and then enabling the reoccupation of opposition territory, effectively sidelined the US from a process covering all of Syria.

Since January 2018, Moscow has held the political initiative with the “Astana process”, alongside Iran and Turkey, pledging a resolution but making little progress. Meanwhile, the US has concentrated on its relationship with the Kurdish-led Syrian Democratic Forces, who control much of northeast Syria after removing the Islamic State.

Russia has sought the formation of a Constitutional Committee for two years, with Pedersen nominally brokering the effort, but the Assad regime has blocked any substantive discussions with its insistence on “retaking every inch” of Syria and defeating “terrorism”.

Russian State outlet TASS immediately threw shade on Pedersen’s statement, preferring the headline, “UN Does Not Rule Out That Militants From Syria May be sent to fight in Libya”.

The Assad regime ignored the UN envoy. Instead, its UN Ambassador Bashar al-Ja’afari repeated Damascus’s standard rhetoric, telling the Security, “Syria will not abandon its right in defending its land and resources, and continuing the fight against terrorism as well as liberating its occupied lands whether the occupier was an American, Turkish, Israeli, or from the terrorist originations.”

But he implicitly noted that the regime have not taken any steps on issues such as the tens of thousands of people held, abused, and killed in its prisons during the conflict: “We are still awaiting concrete news on the issue of detainees, abductees and missing persons.”