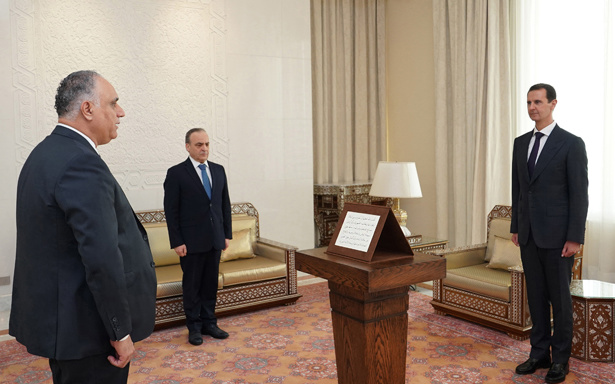 Assad swore in Talal al-Barazi, the former Governor of Homs Province, on Thursday.

Barazi has been Assad’s representative in Homs, as the regime devastated much of the central Syrian province during the nine-year conflict.

State news agency SANA said Assad told Barazi that he “must shoulder its responsibilities, particularly with regard to controlling the markets, monitoring prices, and preventing the manipulation and the monopolization of materials”.

The regime has not been able to check the 75% loss of GDP since 2011 or to provide significant reconstruction. The Syrian pound is now almost 1,500:1 v. the US dollar on the black market, compared with 47:1 in March 2011.

Prices are soaring, and there are shortages of electricity, cooking gas, and esssential goods. About 80% of Syrians live below the poverty line, making less than $100 a month.

But on Sunday, the regime cut automobile fuel subsidies to try and save money.

President Vladimir Putin’s allies in Russia, the regime’s essential backer, are openly criticizing the regime. They are unsettled by Assad’s refusal to consider compromise for a political resolution, and by corruption among the Assad family and ruling elite.

Russian interests are struggling to recoup Moscow’s investment since its massive military intervention in September 2015. They are completing with the regime and Iran, the other backer of Assad, for control of resources.