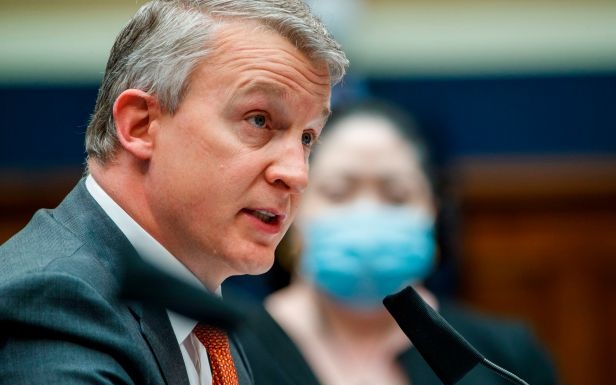 Rick Bright, a top US public health official until he was demoted by the Trump Administration, tells a House hearing of America facing its “darkest winter” after the Administration failed to prepare for Coronavirus.

Bright detailed how there is still no “master, coordinated plan”, almost four months after the first case in the US. He said a “comprehensive strategy” with widespread testing, tracing, and efforts to develop, produce, and distribute a vaccine are essential.

Otherwise, he summarized that the US will endure the “darkest winter in modern history”: “Our window of opportunity is closing.”

Bright was head of the Biomedical Advanced Research and Development Authority, responsible for countermeasures in epidemics. But he was forced out by the Trump Administration this spring.

His offense was to question Trump’s promotion of the untested drug hydroxylchloroquine as a cure for Coronavirus, insisting that it should be vetted.

Bright, demoted to a lesser position in the National Institutes of Health, has filed a whistleblower’s complaint.

He said he was “quite alarmed” over a shortage of swabs needed for testing “and I was even more surprised that the Strategic National Stockpile did not plan or have any of those in supply”.

Bright challenged Trump’s declaration that a vaccine will be established and available to all by the end of the year. The doctor noted that the supply issues over testing and the drug remdesivir, also considered as a treatment for the virus, could happen with vaccines.

Bright said he began to receive alerts that the supply chain for masks and other personal protective equipment was “diminishing rapidly” in January, as Coronavirus entered the US.

However, when he forwarded the alerts to superiors in the Department of Health and Human Services and the national infrastructure and stockpile teams, they were ignored.

Bright cited an e-mail from Mike Bowen, another committee witness and the Vice President of the medical supply company Prestige Ameritech, that supplies of N95 respirator masks were at a critcal level.

Bright “pushed” the warning “to the highest levels” but received “no response”:

I was met with indifference, saying they were either too busy, they didn’t have a plan, they didn’t know who was responsible for procuring those….

A number of excuses, but never any action.

Instead, Health and Human Services leaders said in a February 7 meeting that they did not expect a shortage of N95 masks.

Bright said his response was “I cannot believe you can sit and say that with a straight face.”

Despite leading the effort for treatments and vaccines, Bright was then excluded from discussions: “I was told that my urgings were causing a commotion, and I was removed from those meetings.”

He summarized, “It was absurd….Lives were endangered, and I believe lives were lost.”

Donald Trump and his inner circle tried to pre-empt Bright’s account by tearing down the doctor’s character.

Trump tweeted in the morning, “I don’t know the so-called Whistleblower Rick Bright. Never met him or even heard of him, but to me he is a disgruntled employee, not liked or respected by people I spoke to and who, with his attitude, should no longer be working for our government!”

The Department of Health and Human Services belittled Bright, who has been on medical leave with hypertension since his removal, and his pursuit of the whistleblower’s complaint. It said he “has not yet shown up for work” and is “using his taxpayer-funded medical leave to work with partisan attorneys”.

Republicans on the committee also pushed aside the substance of Bright’s testimony to query if he was testifying as a federal employee on sick leave or as a private citizen.

But Prestige Ameritech’s Bowen undermined the assault with his testimony reinforcing Bright’s account.

But the proposal for 7 million N95 masks a month was dismissed by Health and Human Services, who said it was not “anywhere near” ready for such a plan.

He pushed back on the Republican attacks on Bright:

I don’t know what he did in all of the other activities, but I think what he said made a lot of sense, and I believe him.

Bowen said of the Administration’s treatment of the doctor: “I’m a lifelong Republican, and I’m embarrassed by how that’s been handled. Like Rick Bright said, it’s the scientists we need to be listening to, and we’re not.”

Meanwhile, the Office of Special Counsel concluded, in a review of Bright’s whistleblower complaint, that there is a “substantial likelihood of wrongdoing” on the part of Health and Human Services for retaliation with his reassignment him.

HHS Secretary Alex Azar must now investigate and report to Congress and the White House.