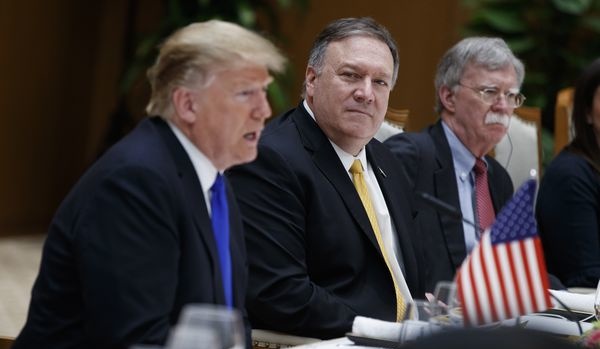 A “White House official” confirmed Pompeo’s request and said Trump agreed. A spokeswoman for Mr. Pompeo did not respond to an e-mail asking for comment.

Rep. Eliot Engel, the chair of the House Foreign Affairs Committee, and Sen. Bob Menendez, the top Democrat on the Senate Foreign Relations Committee, said they have opened an investigation into Linick’s dismissal: “Such an action, transparently designed to protect Secretary Pompeo from personal accountability, would undermine the foundation of our democratic institutions and may be an illegal act of retaliation.”

The two legislators cited a pattern by Trump of “politically motivated firing of inspectors general”.

Since early April, Trump has:

*Fired the intelligence community’s Inspector General Michael Atkinson, over the assessment that a formal complaint about the Trump-Ukraine affair was justified

*Removed Glenn Fine, the acting inspector general for the Defense Department, before he became chairman of a new Pandemic Response Accountability Committee overseeing the distribution of Coronavirus relief funds.

“A Threat to Accountable Democracy”

A Democratic aide said Linick was examining if Pompeo improperly used a political appointee at the State Department to carry out tasks for him and his wife.

Pompeo, who became Secretary of State in April 2018, has been challenged over his frequent trips to Kansas using State Department funds and aircraft. Congressional officials considered Pompeo’s potential misuse of diplomatic security personnel for personal errands, but did not open a formal inquiry.

The firings of multiple Inspectors General is unprecedented; doing so without good cause chills the independence essential to their purpose. It is a threat to accountable democracy and a fissure in the constitutional balance of power.

Linick found in November that, when the State Department was led by Rex Tillerson, political appointees had retaliated against a career civil servant, Sahar Nowrouzzadeh, because of her Iranian-American ethnicity and their perception that her beliefs differed from those of Trump officials.

The investigation considered the actions of Brian Hook, then the head of the office of policy planning where Ms. Nowrouzzadeh worked. He is now the special representative for Iran.

In August, Linick’s office concluded that two political appointees in the Bureau of International Organization Affairs had harassed career employees for being “disloyal”.

Amid his Twitter barrage on Saturday, with scores of tweets and retweets, Trump did not comment on Pompeo’s request or Linick’s firing.