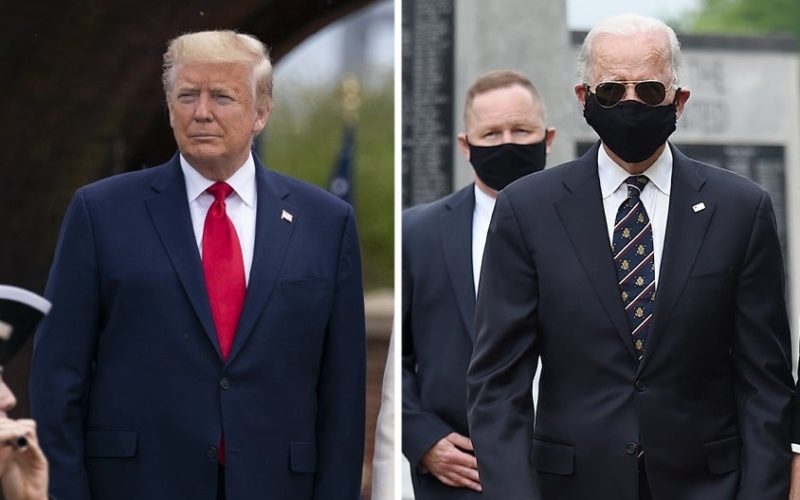 On Memorial Day many Americans — including presumptive Democratic Presidential nominee Joe Biden — somberly mark the holiday and observe Coronavirus guidelines, but an unmasked Donald Trump focuses on Twitter insults and a threat to move the Republican National Convention.

Biden left his home for the first time since mid-March, laying a wreath at the Delaware Memorial Bridge Veterans Memorial Park.

“Never forget the sacrifices that these men and women made,” he said. “Never, ever, forget.”

Trump not only refused to wear a mask during ceremonies at Arlington National Cemetery and at Fort McHenry in Baltimore, but also poked fun at Biden for following public health recommendations as the US death toll rose to 98,223. He retweeted a message from pundit Brit Hume.

This might help explain why Trump doesn’t like to wear a mask in public. Biden today. pic.twitter.com/9l1gw1ljBE

Trump avoided service in the Vietnam War, claiming bone spurs in his feet. Before and after becoming President, he insulted the late Sen. John McCain, a prisoner of war in North Vietnam for 5 1/2 years.

Trump only allowed flags to be flown at half-mast over Federal buildings for the holidays after repeated pressure from staff.

See EA on talkRADIO: A Coronavirus Journey Through Trump-Land as Death Toll Nears 100,000

Through the day, Trump fired off his standard insults of “Sleepy Joe Biden” and “Crazy Nancy Pelosi”, but his primary fury was over media coverage — the “Fake & Totally Corrupt News” of his two days of golf at his Virginia course over the weekend. He again tried to shift blame to his predecessor Barack Obama, having forgotten — or ignoring — that he chided Obama in 2014 for a round of golf during the Ebola outbreak.

Trump began Memorial Day with a threat to move the Republican National Convention, scheduled for late August in Charlotte, North Carolina. His anger appeared to be prompted by the prospect of social distancing measures limiting the crowd inside the convention center.

Trump linked his warning to Governor Roy Cooper, “still in Shutdown mood”, to his demands that other Democratic governors lift stay-at-home and social distancing restrictions, despite medical and public health advice: “We will be reluctantly forced to find, with all of the jobs and economic development it brings, another Republican National Convention site.”

Dory MacMillan, a spokeswoman for Governor Cooper, said, “State health officials are working with the RNC and will review its plans as they make decisions about how to hold the convention in Charlotte. North Carolina is relying on data and science to protect our state’s public health and safety.”

Trump’s demands for the removal of Coronavirus measures were marked by some Americans gathering in holiday crowds.

Boardwalks and beaches were packed from Ocean City, Maryland to Newport Beach, California to Tampa, Florida. In Houston, more than 100 partiers packed a swimming pool area at a club, a day after Texas Governor Greg Abbott eased restrictions on bars and restaurants.

At the Lake of the Ozarks in Missouri, people crammed into pools despite a report from neighboring Arkansas of a pool party leading to a Coronavirus spike. Randall Williams, the Missouri Department of Health and Senior Services Director, warned about “long-lasting and tragic” consequences.