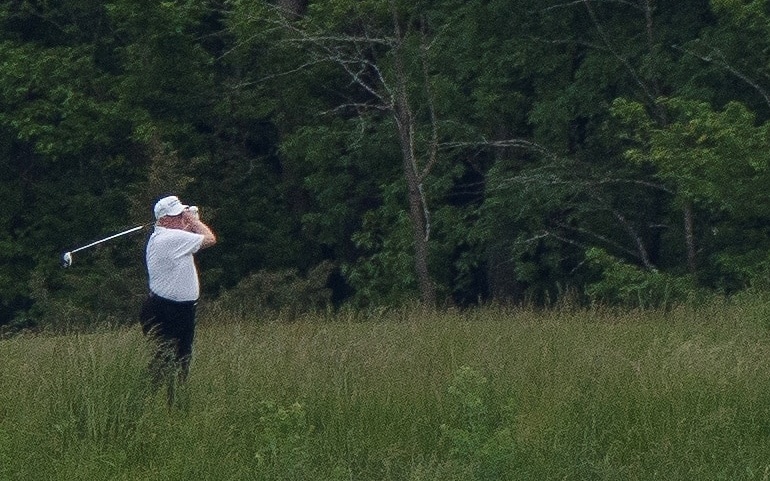 As the US death toll from Coronavirus nears 100,000, Donald Trump does not mention the victims or their families. Instead, he posts all-cap tweets and plays golf.

But Trump’s concern was making it to his golf course in Virginia for the second day in a row. Before and after, he posted dozens of tweets and retweets, lashing out at President Barack Obama, presumptive Democratic Presidential nominee Joe Biden, MSNBC broadcaster Joe Scarborough, and “anti-conservative bias on social media”. He concluded with “OBAMAGATE!” and “MAKE AMERICA GREAT AGAIN”

Trump also continued to build his campaign for a possible postponement of November’s elections. He twice repeated his unsupported denunciation of postal voting as fraudulent, saying it will produce “the greatest Rigged Election in history”.

On Sunday night, Trump — or his staff — retweeted Government messages for social distancing, limits on travel, and handwashing. However, Trump’s tweets were limited to a proclamation that he had donated part of his Presidential salary to Covid-19 efforts, and — contradicting the White House medical advice on social distancing — the insistence that “schools in our country should be opened ASAP”.

A retweet noted that flags were being flown at half-mast above Government buildings for Memorial Day weekend. Trump did not mention that he held out against the lowering of the flags, doing so only after staff pressed him repeatedly.

A small group of people, waiting outside the entrance to Trump’s golf club, reminded him of the issue at hand. One held a sign, “I care do U? 100,000 dead.”

Trump offered no direct response. Instead, he complained on Twitter, “Barack [Obama] was always playing golf.”

Others recalled Trump’s message from 2014:

President Obama has a major meeting on the N.Y.C. Ebola outbreak, with people flying in from all over the country, but decided to play golf!

Some noted that Trump, after pressing Americans to challenge stay-at-home measures by going to church, chose the golf course over a Sunday service.

Neither Trump nor his inner circle spoke yesterday about Trump’s projections from January to March that US deaths from Coronavirus would be “close to zero”.

Instead, the priority of National Security Advisor Robert O’Brien was to tell political talk shows that the G7 summit of global leaders will be held in-person in Washington in late June, despite the pandemic.

O’Brien also said the Administration will impose a travel ban from Brazil, where Coronavirus is spreading rapidly. The South American country now has 22,746 deaths and 365,000 confirmed cases.

Brazilian President Jair Bolsonaro, like Trump, initially denied any threat from Coronavirus. He is continuing to block measures to continue the pandemic.