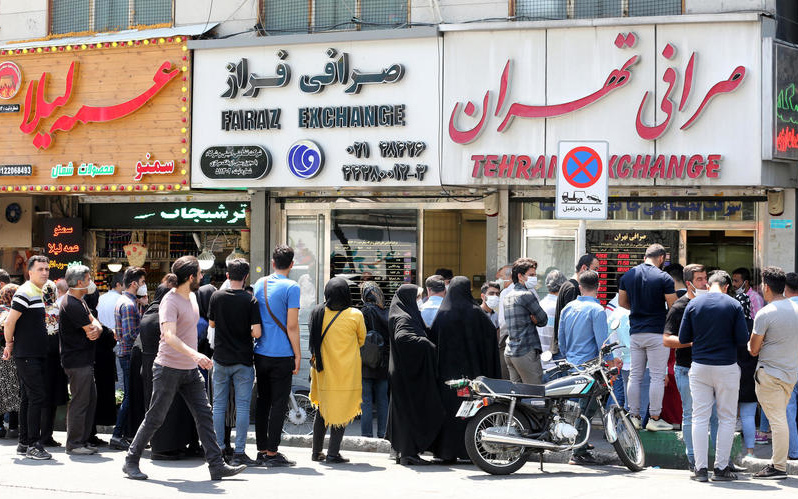 Iranians queue outside a money exchange office in the capital Tehran, May 9, 2020 (Atta Kenare/AFP)

Iran is facing a resurgence of Coronavirus cases as social distancing breaks down amid the Government’s relaxation of measures to contain the outbreak.

Reports from Tehran indicate that people are not observing basic guidance after “low-risk” businesses and mosques were allowed to reopen in the past month.

A shopkeeper in western Tehran chided, “The line of fools,” as customers, many without masks and close to each other, queued outside a foreign currency dealer.

A traffic policeman told AFP that the incident is common since the currency dealers resumed business.

Facing economic crisis and pressed by the Supreme Leader, the Rouhani Government has divided the country into white, yellow, and red zones.

In the white zones, restrictions have been lifted, including the reopening of malls and barbers.

Iran’s official number of cases has resurged from 802 on May 2, its lowest level since early March, to 1,680 on Wednesday.

Authorities have responded by cracking down on communications. On Saturday, Iran’s police chief said 1,300 websites have been shut down and 320 people arrested for “spreading rumors”.

President Hassan Rouhani and officials have continued to emphasize the need to observe social distancing.

Mohammad Mehdi Gouya, director of the Health Ministry’s communicable diseases department, warned, “If people do not observe health protocols, the disease will certainly return. We must not think it’s over and leave home and make social visits as we please.”

But the Supreme Leader has reiterated his call for a “Surge in Production”, his label for this Iranian year. He told manufacturers on Thursday, “The element that can neutralize invasive viruses and microbes targeting the economy and keep it healthy is production.”

A shopkeeper in a Tehran mall, working without protective equipment, said, “All these customers coming in will endanger our lives — us who are forced to come.”

But Masoud Mardani, an infectious disease expert at the health ministry, summarized a rise in cases “partly due to the reopening [of businesses] and people going out shopping”, as well as increased travel.

“People being careful made infections drop, but as soon as the disease was deemed less of a concern, we saw cases grow,” he said.

Other Iranians cited their economic predicaments. Hamed, 22, said, “Life costs money.” He has to travel 90 miles from Qom, the initial center of the outbreak, to Tehran for banking business every few days. If he does not, he will be dismissed by his firm.

He said protection such as a mark was “largely ineffective”.

Some Iranians noted that masks are masks were expensive and in short supply.

Mohammad complained that masks were not given away for week and noted overcrowding on buses, some with “40 people” on them.