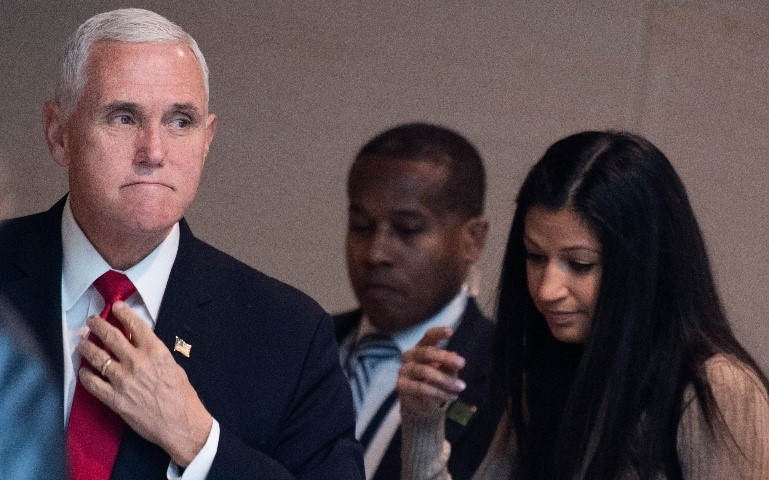 US Vice President Mike Pence and his Press Secretary Katie Miller (R), who has tested positive for Coronavirus (Getty)

Three months after Donald Trump said Coronavirus was a “hoax” spread by Democrats and the media, the pandemic has reached the White House.

Representatives for Dr. Robert Redfield, the director of the Centers for Disease Control and Prevention, and Food and Drug Administration Commissioner Dr. Stephen Hahn confirmed that both men are taking precautions.

However, even as he undermined the White House attempt not to disclose Miller’s identity, Trump indicated the lesson was about unnecessary testing for the virus: “This is why the whole concept of tests aren’t necessarily great.”

He also declared that the virus will “go away” without a vaccine.

Trump has defied medical guidance about precautions throughout the pandemic. He continued to shake hands, including in high-profile White House briefings, and has refused to wear a mask in public. Meetings are being held without observation of social distancing.

The breaking of the guidelines has extended to White House personnel. Vice President Mike Pence did not wear a mask during a visit to the Mayo Clinic, belatedly apologizing for not observing the hospital’s regulations. Last week, Miller was the only person in a gathering without a mask.

After confirmation of the two cases, the White House announced that daily testing of personnel would be carried out.

However, “several administration officials” said supervisors continued to encourage staff to come into the office, despite a memo from the White House management office encouraging employees to “practice maximum telework” and to “work remotely if at all possible”.

Aides travelling with Trump and Pence will not self-quarantine for 14 days, despite possible contact with the virus.

The White House press office would not say whether employees beyond Miller and the Navy valet have been told to self-quarantine. Spokesman Judd Deere said:

The President’s physician and White House operations continue to work closely to ensure every precaution is taken to keep the president, first family and the entire White House complex safe and healthy at all times.

In addition to social distancing, daily temperature checks and symptom histories, hand sanitizer, and regular deep cleaning of all work spaces, every staff member in proximity to the President and Vice President is being tested daily for Covid-19 as well as any guests.

“People familiar with the matter” spoke of nervousness throughout the West Wing after news of Miller’s diagnosis. Aides went through seating charts, looked at her schedule, and questioned anyone who may have been close to her in a room. Officials continue to call staff on Saturday.

Miller is the wife of Trump’s senior advisor Stephen Miller, known for his hardline anti-immigrant proposals, who is said to be quarantining at home.

Katie Miller was regularly around Trump through the daily White House briefings, which have been suspended since Trump’s comments two weeks ago about injecting disinfectant to cure Coronavirus.

She was in the White House Task Force meeting, chaired by Pence, on Thursday and attended a senior staff meeting on Friday morning.