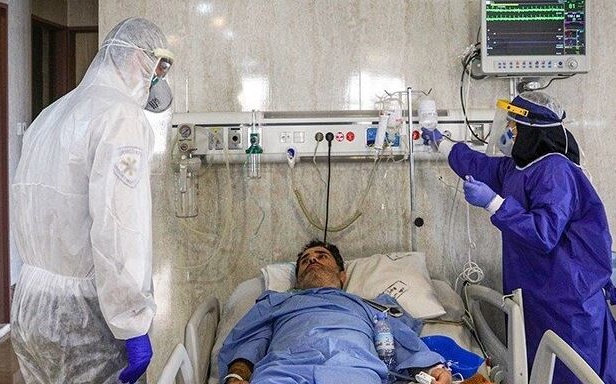 Iranian nurses with a Coronavirus patient in Tehran, May 14, 2020

About 10,000 health workers have been infected with Coronavirus in Iran, according to a deputy health minister.

The semi-official Iranian Labor News Agency carried the minister’s statement on Thursday, as the virus continued to resurge amid the Government’s re-opening of some businesses and all mosques.

The Health Ministry officially reported another 2,392 cases on Thursday, raising the total to 129,341. Another 66 deaths raised the official toll to 7,249.

The Government reopened “low-risk” businesses across most of Iran from April 11 and in the capital Tehran from April 18. It has divided the country into white, yellow, and red zones for further lifting of restrictions.

The Supreme Leader has put an emphasis on fulfilling his slogan of a “Surge in Production” for Iran’s troubled economy.

On Thursday, Health Minister Saeed Namaki appealed to Iranians to avoid trips during the Eid al-Fitr religious holiday at the end of Ramdadan.

I am urging you not to travel during the Eid. Definitely, such trips mean new cases of infection….People should not travel to and from those high-risk red areas….

Some 90% of the population in many areas has not yet contracted the disease. In the case of a new outbreak, it will be very difficult for me and my colleagues to control it.

The Tourism Ministry echoed the warning.

The Health Ministry said in April that more than 100 health workers have died from Coronavirus.

Parliament’s Research Center has said that the actual number of deaths and infections may be close to double the official figures.