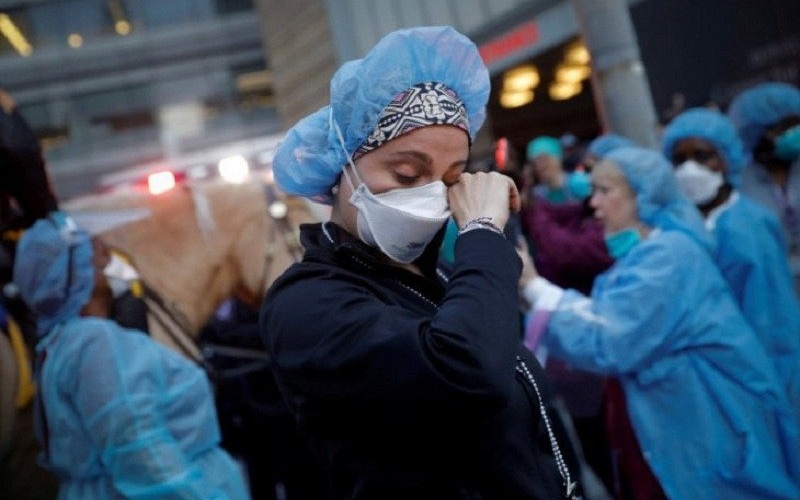 Continuing his attacks on State governors, Donald Trump repeats lies about the status of testing and medical supplies amid the spread of Coronavirus in the US.

Bu Trump — who spent the week in a failed grab for “total authority”; a cutoff of US funds to the World Health Organization; and encouragement of illegal protests against stay-at-home and social distancing orders — used Saturday’s White House briefing to continue his disinformation and insults of State leadership.

Trump’s latest outburst was spurred by the failure of his attempts to lift Federal social distancing guidelines and the State orders, initially by April 12 and then by May 1.

White House medical advisors have said that the US will need to test about 500,000 people a day to prevent a resurgence of Coronavirus.

However, with the Administration failing to organize effective provision across the US, testing has plateaued at 150,000 per day.

Gov. Andrew Cuomo of New York, which has had 17,627 deaths, summarized on Friday: “We cannot do it without federal help….We don’t have a testing system that can do this volume or that can be ramped up to do this volume.”

Both Republican and Democrat governors have said they face shortages of crucial testing supplies and chemical reagents. Medical professionals have reinforced the concern, with Dr. Megan Ranney summarizing, “There’s just so many inefficiencies and problems with the way that testing currently happens across this country.”

Trump avoided the assessments on Saturday, instead proclaiming, “Nationwide, we’ve now conducted over four million tests….It’s double the number of conducted by any other country on earth.”

He did not note that the US is only 18th in the world on a per capita basis.

This is the best measure I’ve seen of quite how few #COVID19 tests the UK has done. It is an international league table of countries ranked by percentage of population tested, compiled by Julian Ozanne (who was on FT with me in another life). The UK comes 20th out of 20 pic.twitter.com/pvJaMe3GH6

At his daily press conference, Cuomo said New York is past the peak of increase in Coronavirus, with total hospitalizations and admissions to intensive care units decreasing over the last three days.

But he noted 540 deaths in 24 hours and more than 2,000 hospitalizations: “That is still an overwhelming number every day….This is where we were in late March.”

The Governor reiterated the critical issue of testing:

The challenge is now bringing this up to scale. We did 500,000 tests in a month. That’s great news. The bad news is it’s only a fraction of what you need. The more you test, the more information, the more you can reopen society.

Covering up his denial of Coronavirus through January and February, Trump tried to blame China, “It could have been stopped in China before it started and the whole world is suffering because of it.”

Then he tried to blame unnamed others for his failure to organize Administration action over medical supplies: “I inherited broken junk….We started with garbage.”

Trump betrayed that he is still wounded by last Sunday’s New York Times revelations, of how more than 70 days was lost because of his insistence that Coronavirus was a Democratic “hoax” and his blocking of any Federal preparations and measures.

He opened the briefing with the false assertion that “the United States has produced dramatically better health outcomes than any other country with the possible exception of Germany”, and later launched a tirade against the Times’ White House correspondent Maggie Haberman:

So Maggie Haberman gets a Pulitzer Prize. She’s a third-rate reporter….It was a nasty story in so many ways. It was fake news. And she only did it because we exposed her for being a terrible, dishonest reporter.

Falsehoods from Gun Control to AIDS

Trump reinforced his encouragement of the illegal protests, with the declaration that Democrats in Virginia are talking about “taking your guns away”.

On Friday, as he used all-caps tweets to tell people to “LIBERATE” Virginia, Minnesota, and Michigan, Trump added a denunciation of gun control in the guise of “save your great 2nd Amendment”.

Trump tried to counter criticism of his cutoff of US funding to the World Health Organization with the assertion, “There are other ways we can spend the $500 million….What we’ve done for Aids in Africa is unbelievable. We’ve spent $6bn a year….Nobody knows that. You’ve never heard that. I’ve never heard that.”

In fact, while Trump have been ignorant, it is common knowledge that the US has provided funds for Africa as part of its $6.8 billion support for global programs to counters HIV and AIDS.

What Trump did not mention is that the Administration has proposed cuts to that funding.

As the briefing devolved into a campaign speech, Trump peppered it with unsupported, tangential declarations such as “the Christian faith is treated much differently than it was and I think it’s treated very unfairly”.

Trump’s final statement started as a blast against State governors, with false claims about the supply of life-saving ventilators, but descended into a barely-coherent ramble about Iran, North Korea, and Russia.

Trump concludes one of his most deranged performances by claiming (falsely) "nobody has been tougher on Putin than me," ranting about oil, & expressing surprise that the WSJ wrote an editorial that didn't criticize him.

The purpose of this event was ostensibly a deadly pandemic pic.twitter.com/y51VkEqXdU