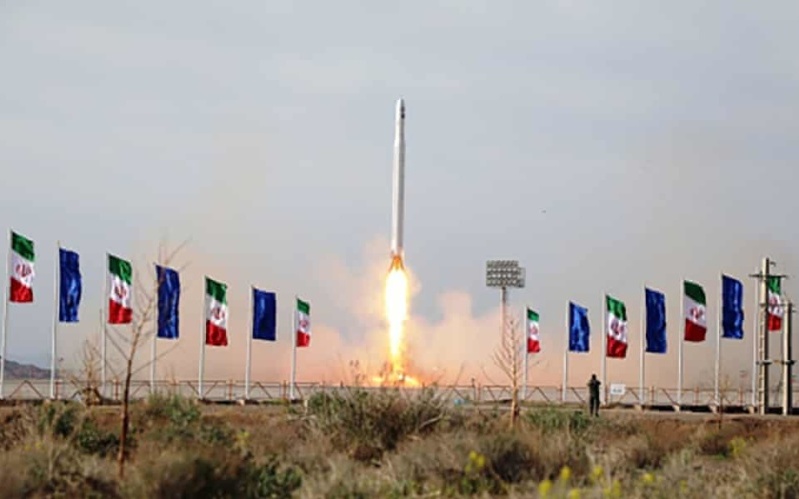 Iran military photograph of the launch of the Noor 1 satellite, April 22, 2020

I have instructed the United States Navy to shoot down and destroy any and all Iranian gunboats if they harass our ships at sea.

There was no apparent White House consultation before Trump’s blast, although Iran’s military said on Sunday that it had a tense encounter with US warships in the Persian Gulf last week.

Iran’s Revolutionary Guards said they were conducting a drill against “the unprofessional and provocative actions of the United States and their indifference to warnings”, claiming that US navy later withdrew.

Trying to define the limits of Trump’s tweet, senior Pentagon officials said it was not a change of rules of engagement but a warning that the US military will continue to exercise its right to self-defense.

Trump said at a Wednesday White House briefing that there was no modification of the rules of engagement, but then doubled down on his challenge:

We don’t want them anywhere near our boats….I am not gonna let that happen…and we’ll shoot them out of the water.

On Wednesday, the Revolutionary Guards said they put the satellite “Noor” (Light), launched by a three-stage rocket, into a 425 km (264 miles) high orbit.

While the Pentagon said it was too early to confirm the launch, the North American Aerospace Defence Command issued a new code designator for an orbiting object.

“I consider that this confirms that the Iranian satellite successfully reached orbit,” said Jonathan McDowell, an astronomer at the Harvard-Smithsonian Center for Astrophysics.

Here is the launch track pic.twitter.com/UMaP1eZqrk

US Secretary of State Mike Pompeo declared that the launch violated a 2015 UN Security Council resolution accompanying the nuclear deal between Iran and the 5+1 Powers (US, UK, France, China, Russia, Germany).

I think every nation has an obligation to go to the United Nations and evaluate whether this missile launch was consistent with that Security Council resolution. I don’t think it remotely is, and I think Iran needs to be held accountable for what they have done.

The UN resolution called on Iran “not to undertake any activity related to ballistic missiles designed to be capable of delivering nuclear weapons”. Tehran says its space program is not pursuing intercontinental ballistic missile capability.

Meanwhile, Gen. John Hyten, the vice-chairman of the US Joint Chiefs of Staff, said of Trump’s threat:

I like that the president warned an adversary. That’s what he’s doing. He’s providing a warning. If you want to go down that path, we will come and we will come large.

[If] you’re waving, that’s one thing. If you have a gun, and you point it at me, that’s another thing – we know exactly what that means. So if you cross that line, we know what that line is, and we will respond.