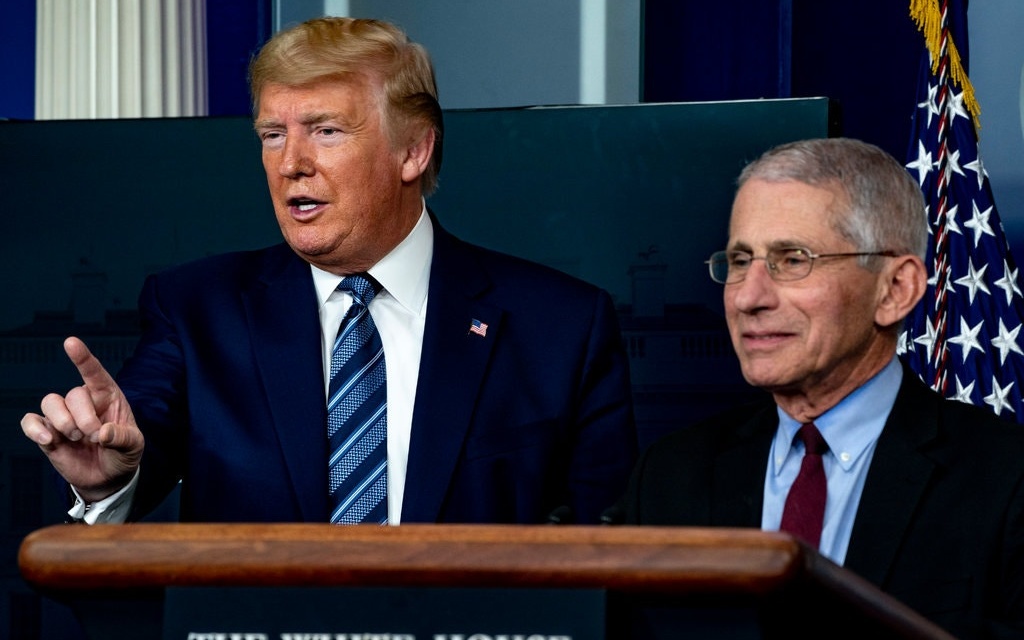 The greater New York area continues to be the epicenter of the crisis. New York State has 4,159 fatalities. New Jersey is second in the country with 917, and there have been 189 in Connecticut.

Michigan, feared to be the next epicenter, now has 617 deaths, the third-highest state toll.

ORIGINAL ENTRY: With soaring US deaths from Coronavirus and shortage of essential medical supplies, Donald Trump overrules his medical advisors to bet on an untested drug.

Trump stepped up his promotion of the anti-malaria drug hydroxylchloroquine with a hastily-arranged White House briefing on Sunday night.

Trump claimed that “there are some very strong, powerful signs” of hydroxylchloroquine’s ability to limit the spread of Coronavirus in patients, even though there has been no significant testing and medical experts have questioned its efficacy and pointed to life-threatening side effects.

“What do you have to lose?” he asked before admitting, “So what do I know? I’m not a doctor.”

Trump quickly added, I’m not a doctor, but I have common sense.”

A journalist tried to ask Dr Anthony Fauci, the director of the National Institute of Allergy and Infectious Diseases, about the drug: “What do you think about this and what is the medical evidence?”

But Trump blocked the specialist from answering, “What do you think about this and what is the medical evidence?”

Fauci has used interviews to question the prescription of hydroxylchloroquine, noting that all claims of its efficacy are “anecdotal”.

On Sunday morning, he told CBS News, “As I’ve said many time, the data is at best suggestive. There have been cases that show there may be an effect, and there are others to show there is no effect.”

Dr Deborah Birx, the head of the White House task force on Coronavirus, stood silently on the podium.

Trump began his promotion of hydroxylchloroquine, after seeing a report on Fox TV about the drug. He falsely told a briefing that the Food and Drug Administration had approved its use, bringing a hasty correction from the FDA that this was not true.

The FDA has now approved experimental testing of the drug on Coronavirus patients, and some hospitals are using it as a last-resort option.

But the combination of hydroxylchloriquine with other drugs can disrupt the heart rate, leading to cardiac arrest.

Dr. Megan Ranney, an emergency physician at Brown University, said this is the first time that she has seen an elected official tout a wonder cure. She warned:

There are side effects to hydroxychloroquine. It causes psychiatric symptoms, cardiac problems and a host of other bad side effects.

There may be a role for it for some people, but to tell Americans, “You don’t have anything to lose,” that’s not true. People certainly have something to lose by taking it indiscriminately.

A claimed trial in France, promoted in the Fox TV report seen by Trump, did not include a control group for comparison. A small test by Chinese researchers claimed hydroxylchloroquine helped speed recovery in moderately-ill patients, but the study was not peer-reviewed and has been criticized for significant limitations.

The American Medical Association has opposed the prescription of the drug, noting also the effect of hydroxylchloroquine not being available for the conditions which it normally treats: “[There are] grave consequences for patients with conditions such as lupus or rheumatoid arthritis if the drugs are not available in the community.”

But Trump dismissed the medical guidance in the White House briefing:

We don’t have time to go and say, “Gee, let’s take a couple of years and test it out,” and let’s go out and test with the test tubes and the laboratories. I’d love to do that, but we have people dying today.

He snapped when CNN’s Jeremy Diamond pressed the point, “Only CNN would ask that question. Fake news. Go ahead. Bunch of fakers.”

Before Sunday’ briefing, Fauci was challenged by an unqualified Trump advisor in a contentious White House meeting.

Dr. Stephen Hahn, the FDA commissioner, had given an update on hydroxylchlorooquine, including the limited tests and anecdotal claims.

But White House trade advisor Peter Navarro, who was not among the main participants in the meeting, intervened with a shief of folders. He claimed they were studies from various countries, and information from the Centers for Disease Control and Prevention, that showed “clear therapeutic efficacy”.

When Fauci reiterated that the claims were anecdotal and that rigorous studies are necessary. Navarro exploded in anger, “That’s science, not anecdote.”

He falsely claimed the doctor had opposed the Trump Administration’s travel restrictions from China, one of the few significant steps taken early in the crisis.

Vice President Mike Pence tried to intervene before Kushner gave Navarro an assurance that hydroxylchloroquine would be sent to hot spots, “Take yes for an answer.”

The White House had told reporters on Sunday that there would be no briefing. However, Trump flagged in a tweet that he might appear after another meeting.

Notice was quickly given that the briefing was on, and Trump proclaimed, “Now this is a new thing that just happened to the ‘invisible enemy’, as we call it.”

But Dr. Kenneth Klein, a consultant for drug companies on clinical trials, turned around Trump’s words: “What have we got to lose?” We’ve got patients to lose from dangerous side effects.”

And Dr. Luciana Borio, who advised the National Security Council in the Obama Administration on public health preparedness, summarized:

Hydroxychloroquine has been studied as a possible antiviral therapy for many decades. Despite showing evidence of activity against several viruses in the laboratory, it never showed success in randomized clinical trials.

Meanwhile, Navarro continues to insist that he has the qualifications to advise on the issue. He said Monday morning:

My qualifications in terms of looking at the science is that I’m a social scientist. I have a Ph. D. And I understand how to read statistical studies, whether it’s in medicine, the law, economics or whatever.