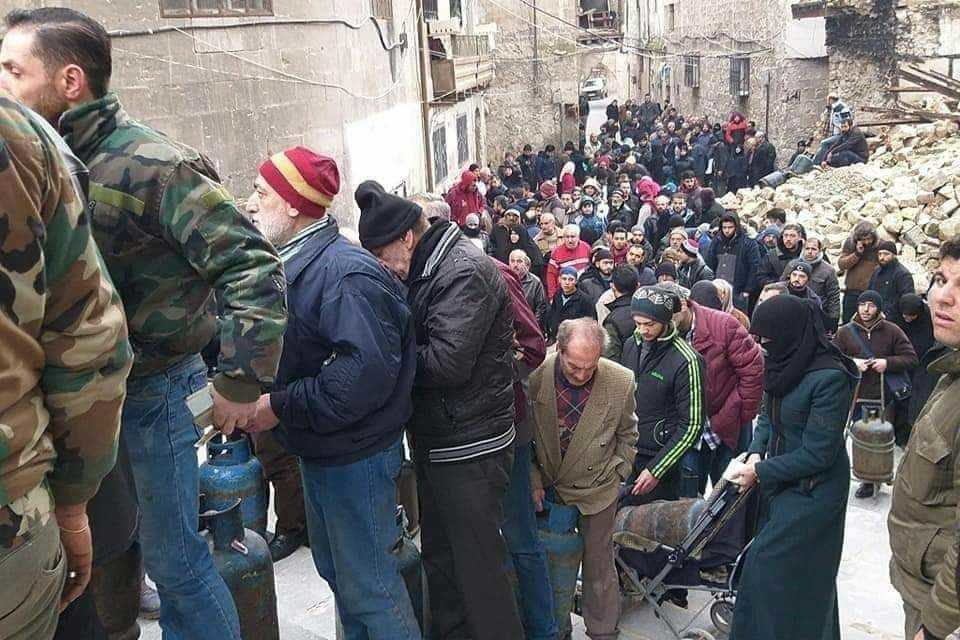 Syria’s civilians are struggling with shortages of basic supplies and utilities in regime-held areas, including those taken from the opposition over the last 2 1/2 years.

Reports have been mounting among pro-Assad activists as well as opposition sites, and Syrian State outlet SANA made the admission on Monday, “More and more negative repercussions are affecting the living conditions of Syrian civilians.”

Sources inside Syria confirm to EA that there are long queues of people for gas canisters and lengthy outages of electricity, reports that have been supported by photographs circulating on social media and opposition outlets. Milk, bread, and other items are said to be in short supply.

The reports emerged earlier this month from Aleppo city and the surrounding countryside, seized by pro-Assad forces in December 2016. They were spurred by the death of an infant in the winter cold, with his father saying he could not obtain gas for cooking and warmth.

Prices are soaring, with residents in long queues to take the heavy gas cansisters back home. Local civilians claim members of Assad’s security forces and city and provincial officials are taking most of the gas — some reports cite up to 6,000 people waiting for canisters that can only supply 200 to 1,000.

The difficulties have led to businesses closing in the industrial city of al-Sheikh Najjar, northeast of Aleppo. Taxes and fines, imposed by the security services and militia at military checkpoints, are further escalating prices.

New York-based banker George Saghir, a leading social media outlet for the regime’s position, acknowledged, “Areas under the control of Assad in Aleppo & its southeastern countryside are witnessing a state of popular discontent due to the lack of basic goods, including gas, bread, water, electricity, and other necessary services.”

War economy. People are desperate. It’s all up for grabs

Officials and supportive clerics are warning anyone who criticizes the Assad regime for the shortages. Meanwhile, they are attributing any difficulties to international sanctions rather than the regime’s management and planning.

The Speaker of Parliament, Hamouda al-Sabbagh, said “the Government would explain the objective reasons” for the crisis. He then focused on “electronic campaigns intensified on us through Facebook and social media, which are managed mostly from abroad”, to “carry confusion in the ranks of public opinion”.

The imam of the Umayyad Mosque in Damascus, Mamoun Rahma, said at Friday Prayers that everyone who uses social media to challenge the regime is working on behalf of “a campaign, managed by the Zionist entity, targeting the state and the economy”.

SANA’s article on Monday derides “economic warfare, whether by preventing trade exchange or exploiting mass media or punishing those who help Syria”. It said the US and Europe “seek to create economic problems that cause division in the Syrian society and affect the investment environment”.

A pro-opposition site, writing about the milk shortages in Damascus and other cities, counters that “some officials are conspiring against children under the pretext of war and sanctions”.

Throughout the 94-month conflict, Tehran has propped up the regime, providing billions of dollars in a credit line which has included oil supplies. But Iran is facing its own economic crisis, with oil exports down 60% since April and issues with production, investment, trade, and a weakened currency.

No details have been given of this week’s talks.