Ireland and the US in the Age of Great Disruption 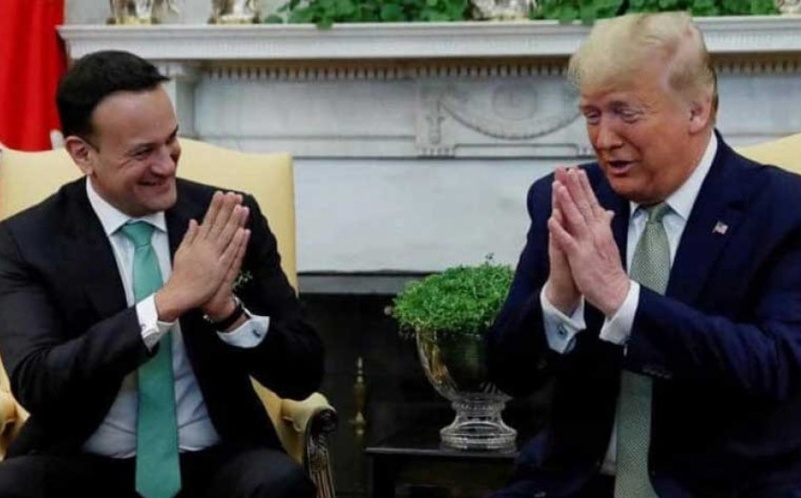 Irish Taioseach Leo Varadkar with Donald Trump in the White House, March 12, 2020: “This is the interregunum, a precarious time in which Ireland needs to carefully navigate its place in an emergent world order” (Reuters)

This month’s disruption of the Irish Taoiseach Leo Varadkar’s visit to Washington, a St. Patrick’s Day tradition, was an amalgam of bad timing and political ill feeling.

The tradition of the “shamrock ceremony”, with its origins in the 1950s, was cancelled due to Coronavirus fears. The tradition of the bipartisan luncheon, established in 1983 and hosted by the House Speaker, was boycotted by Donald Trump and Vice President Mike Pence to keep their political as well as social distance from Nancy Pelosi.

These breakings of norms upended the careful choreography of Irish diplomacy around the St Patrick’s Day engagement with the White House, an annual and impressive example of soft power. It is but one mini-drama in the growing, epic drama of Atlantic disruptions in the age of Brexit and Trump.

Atlantic Disruptions is a working title for a research project and a series of events and talks that UCD Clinton Institute is running with partners in the US and Ireland. We aim to consider political, economic, and cultural disruptions in transatlantic affairs and how Irishness is positioned and performed in relation to these.

Our title registers turbulence in Atlantic relations, broadly taking up questions of paradigm change occasioned or accelerated by Brexit and other disruptions in trans-Atlantic affairs, including immigration and borders, populism and ethno-nationalism, and race and class discontents.

At its immediate level, “Brexit” names a dramatic rupture in the political economies of the UK and the European Union. Underlying that rupture are disturbances that are deeper, broader and less easily named. They have not yet fully played out in either political or cultural representation.

Brexit’s period of suspension may be understood as an interregnum, to invoke Italian theorist Antonio Gramsci’s term. It is a time when “the old is dying and the new cannot be born”. In the broadest, global terms, Brexit is symptomatic of a crisis in the liberal world order as the once hegemonic power of liberal market economies lose their allure.

In Europe, we see if not a collapse then at least a significant loss of faith in social democracy. We see disaffection with ideas of integration, as resurgent forces of right-wing nationalism disrupt politics across the continent.

In the US, the Presidency of Donald Trump has ignited an attack on liberal democracy that may prove epochal, shown by deep divisions within an increasingly polarized and partisan nation.

However you like to articulate the paradigm wars of the moment – for example, between globalists and nationalists – there is an unmooring of familiar points of reference. The tectonic plates of socio-economic realities have moved and shifted some of our bearings. We know the pieces are moving around but not how they will settle, with what violence, and with what results.

How will Ireland fare in this remaking of the liberal world order?

Ireland has long had to carefully triangulate its interests and relations between the UK, Europe and the US. Brexit has raised the stakes in this complex diplomatic and economic positioning. The scenario is challenging for a small state, as these more powerful entities are also in the midst of reconfiguring their relations with each other.

In 2000, Tanaiste (deputy head of government) Mary Harney spoke of Ireland’s Janus-faced position, between a Europe representing social inclusion and government regulation and a US that promoted the free market and minimal government involvement. Weighing their relative merits for an Ireland experiencing the full-throttle economic boom, Harney concluded, “Spiritually we are probably a lot closer to Boston than Berlin.” It was a conclusion that reflected the optimism of the time, that Ireland was the new poster child of globalization.

Is that true today? The answer is not obvious, in part because Boston and Berlin no longer symbolize what they did in 2000, amid seismic challenges to US and European political economies. Ireland has experienced the financial crisis of 2008, the bailout and austerity measures that followed, and two major referenda. The long 20th century ended with such a rush in Ireland that it can be head-spinning to take measure of its hyper-modernity today.

The most recent government, led by Leo Varadkar, sought to manage this change by melding economic conservatism and social progressivism while continuing to champion globalization. It was an ambitious and not very successful formula, if we judge by recent election results that reveal deep discontents in the country. Now a new government must seek to restore relations between the state and its public while balancing relations with the UK, the EU and the US.

There are signs that Brexit has stimulated Irish American political interests to an extent not seen since the end of the conflict in Northern Ireland. The Irish Government and the Irish American lobby in Washington are seeking to manage this to Dublin’s benefit. The pressure point is the Irish border and the question of how Brexit will affect a peace process brokered and guaranteed by the US.

Irish-American politicians have been on message since January 2019 when US Rep. Brendan Boyle introduced a resolution in Congress opposing the establishment of “a hard border” on the island of Ireland. In April, Nancy Pelosi amplified the message as she led a delegation of US politicians on a “fact-finding mission” to the UK and Ireland.

“Let me be clear,” Pelosi said in an address to the Dail (Irish Parliament), “if the Brexit deal undermines the Good Friday Accord, there will be no chance of a US-UK trade agreement.”

The bluntness of the message was calculated and multi-directed. It was an intervention into British-Irish-EU deliberations on Brexit – on the grounds that the US is a guarantor of the 1998 Good Friday Agreement – but it was also a message to Donald Trump — a Democrat-controlled Congress will not allow him to make a trade deal on the hoof with the UK.

The message has been consistently repeated and given further heft by Rep. Richard Neal, chair of the influential House Ways and Means Committee, which will oversee any post-Brexit trade deal between the US and the UK. Neal is also a co-chairman of the Friends of Ireland Caucus in Congress, and a long-time spokesman for Irish interests in Washington.

A coordinated flexing of diplomatic and political muscles is happening here. The outcome is still far from clear, but what is significant is the confidence shown by Ireland – this is high-wire diplomacy for a small state – and the residual power of Irish-American political capital when it had been considered moribund.

St Patrick’s Day is a good time to take some soundings not only of Ireland-US relations but also of the Irish diaspora in the US.

The relationship between Ireland and the US has long been subtended by that between the Irish and Irish America. The nation and its diaspora exist in a dyadic relationship, in which each seeks meaning about itself in the other. While these mirrorings have never been in sync, they are particularly disjointed at present.

For Irish Americans, particularly of older generations, Ireland appears to be morphing into a secular, progressive state that does not gel with their imaginings of the old country. For domestic Irish, Irish America appears to be becoming more conservative, closed, and forgetful of its immigrant past.

Of course, these are distorting fantasies but nonetheless powerful — just like the fantasy of English nationalism driving Brexit — and they break against Atlantic perceptions and relations. At their roots are different ideas of what it means to be Irish, sharpened and challenged by Trump’s presidency.

An Existential Moment for Ireland and Irishness

This is a moment of truth about what it means to be Irish in the world. We either wink at a racism that affords most of us the privilege of a white skin. Or we honor the struggles of so many millions of Irish immigrants to be accepted as equal human beings.

That’s a heady claim, one that posits a deep investment in the Irish-US relationship, and a stark articulation of what is at issue in this moment of Atlantic disruption — a fundamental challenge to the historical and ideological sureties of Irish identity. Trump — or more accurately Trumpism — is as much an existential challenge to Ireland and Irishness as is Brexit.

Conflicting claims to Irish identity are a significant feature of the Atlantic disruptions of the present. They signify not only economic instabilities but also ideological and existential uncertainties.

This is the nature of the interregnum, a time of suspended norms and expectations. It is a precarious time in which Ireland will need to carefully navigate its place in an emergent world order.