A Brexit Message from Nancy Pelosi and Irish-US Diplomacy 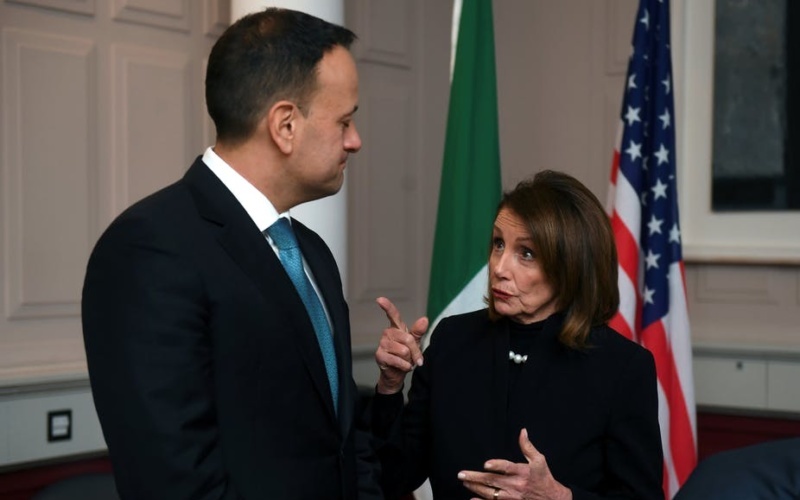 On her recent visit to Europe, Nancy Pelosi, the speaker of the US House of Representatives, addressed members of Ireland’s Dail (the lower house of the Irish parliament). The event marked the centenary of the Dail’s founding during revolution against British rule. However, beyond the symbolism of the historical moment, Pelosi and Irish-US diplomacy were sending a message over today’s Brexit-induced uncertainties.

Pelosi was leading a delegation of US politicians on a “fact-finding mission”, but this was also a diplomatic and political mission for audiences in the UK and the US as well as Ireland.

In her Dail speech, Pelosi eloquently and somewhat sentimentally gave examples of “the emerald thread that runs through American history” before a contemporary and unsentimental punchline: “Let me be clear, if the Brexit deal undermines the Good Friday Accord, there will be no chance of a US-UK trade agreement.”

That statement cut to the political quick of Pelosi’s visit, and also to the Irish-US diplomacy informing it.

See also The Good Friday Beacon We Need: The Life and Death of Lyra McKee

At each stage of the Congressional delegation’s visit to the UK and Ireland – London, Dublin, the border, and Belfast – Pelosi was consistent and forthright with her core message. In London, she said, “If there were any weakening of the Good Friday accords there would be no chance whatsoever, a non-starter for a US-UK trade agreement … Don’t even think about it.” That’s not bland diplomatic speak. The bluntness of the message was calculated and multi-directed.

It is intervention into British-Irish-EU deliberations on Brexit – on the grounds that the US is a guarantor of the 1998 Good Friday Agreement – but also a message to Donald Trump. Pelosi was warning the President that a Democrat-controlled Congress will not allow him to make a trade deal on the hoof with the UK. That Trump and his supporters are hearing the message is evident from a Fox News headline: “Pelosi Undermines Trump Abroad on US-UK Trade Deal”.

Leading Brexiters were also aggrieved by Pelosi’s interventions. They have consistently put a trade deal with the US at the heart of their vision and were not pleased to see this debunked by high-ranking American politicians.

After Pelosi and colleagues met with members of the European Research Group, including its leader Conservative MP Jacob Rees-Mogg, Congressman Brendan Boyle said they had had a “frank discussion” and “a good, sincere, honest exchange”. That’s diplomatic code for voluble argument and disagreement. Boyle reflected:

Their world view is that the border issue is “concocted” and that it is really just being used by Remainers in London, Brussels, Dublin and Washington all in some sort of grand conspiracy to force them to do something that they don’t want to do.

While the Brexiters’ claims of a grand conspiracy say more about their paranoid fantasies than political realities, there is nonetheless some transatlantic coordination at work in Pelosi’s messaging. She was accompanied on the trip by Congressman Richard Neal, chair of the influential House Ways and Means Committee that will oversee any post-Brexit trade deal between the US and the UK. He is also a co-chairman of the Friends of Ireland Caucus in Congress, and a long-time spokesman for Irish interests in Washington.

The Friends of Ireland caucus was founded in 1981 by three senior Irish-American politicians – Senators Edward Kennedy and Daniel Moynihan and Speaker of the House Tip O’Neill. It was influential in leading Irish America to support peaceful resolution to the Northern Ireland conflict and in drawing President Bill Clinton into a major commitment to ending it. Those were heady days of Irish-American leadership and Irish lobbying in Washington – watched with some trepidation and even envy by British diplomats.

With the giants of that generation of Irish-American leadership having passed on and the galvanizing conflict in Ireland thankfully becalmed, it would be easy to ignore or dismiss Irish-American political capital today. But it is stronger than in the eyes of outsiders and is showing signs of resurgence.

In The Economist, Lexington marvelled that the Irish Taoiseach is the only world leader guaranteed an annual meeting with the President of the US, and remarked that “Ireland’s soft-power triumph is mainly testament to the continued enthusiasm of 32m Irish-Americans for their roots, and to their equally remarkable dominance of American politics”.

Ireland is using that soft power to support its preparations for Brexit. Irish-American politicians have been on message since January of this year when Boyle introduced a resolution in Congress opposing the establishment of “a hard border” on the island of Ireland.

That message was amplified in a letter in February to UK Prime Minister Theresa May and Irish Taoiseach Leo Varadkar, signed by 40 leading Irish Americans, warning that Brexit could jeopardize the Good Friday Agreement.

In March, 22 members of Congress signed a letter to May warning that a post-Brexit “free trade agreement,may be delayed indefinitely if we are obligated to respond to potential crises on the island” of Ireland. That message was sent on the eve of Varadkar’s visit to Washington to mark St Patrick’s Day.

The message has now been forcefully delivered to the UK government and Brexiteers’ doorsteps by Pelosi and Neal.

It’s clear that a coordinated flexing of diplomatic muscles is happening here. The warning that a trade deal with the US is off the table if the Good Friday Agreement is compromised should not be ignored amid the chaotic realignments of transatlantic relations.