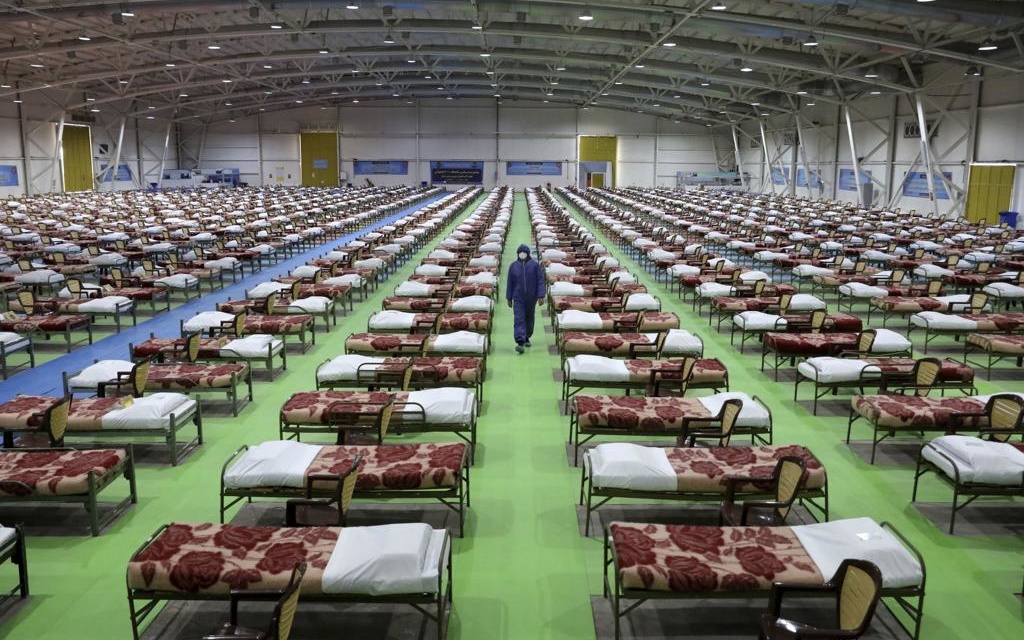 A worker walks through a makeshift hospital set up by Iran’s military for Coronavirus patients, March 2020

The Health Ministry has raised the official death toll to 2,517, among 35,408 confirmed cases.

As Iran’s Coronavirus toll rises, public transport has been suspended in the capital Tehran, but there is confusion over restrictions belatedly ordered by the Rouhani Government.

All subway and bus services have been halted after Tehran City Council Chairman Mohsen Hashemi tweeted, “Public transport should be stopped or restricted to an emergency network if the decision to control the Coronavirus outbreak is serious.”

Hashemi noted that air conditioning in the Tehran subway, circulating in a closed circuit, increases the chance of contracting Coronavirus.

Officials in Shiraz have called for similar restrictions.

Rouhani, who had opposed quarantines throughout the crisis, said that a “major part of the economy” would be shut down. “Tough decisions…made for protecting lives of people” would include the closure of most businesses and workers restricted to their homes. One-third of public sector staff continue to work, in shifts, to provide necessary services.

Tehran Province Governor Anushirvan Mohseni Bandpay said on Friday that traffic restrictions will not be in place on March 31 and April 1, on the eve the traditional holiday of Sizdah Be-dar, when most Iranians celebrate nature with outdoors trips.

A deputy governor had said that there is a ban on driving on the two days, but Bandpay said the Government’s announcement only banned outdoor gatherings in parks and natural resorts.

The police chief, Taymour Hosseini, overseeing Iran’s roads said the ban on arrivals in Iranian cities does not apply to those in Tehran Province and neighboring Alborz Province.

Reports say the highway toll station between Tehran and the holy city of Qom has reopened, with no police officers in position.

Hosseini’s statement appeared to contradict Adel Mesdaghi, a senior transportation official, who said no vehicle should be allowed to leave Tehran until further notice.

Iran’s Health Ministry raised the official toll on Friday to 2,378 deaths and 32,332 cases. The increase in both numbers has been steady over the past week.