Getting Smart in the Age of Trump 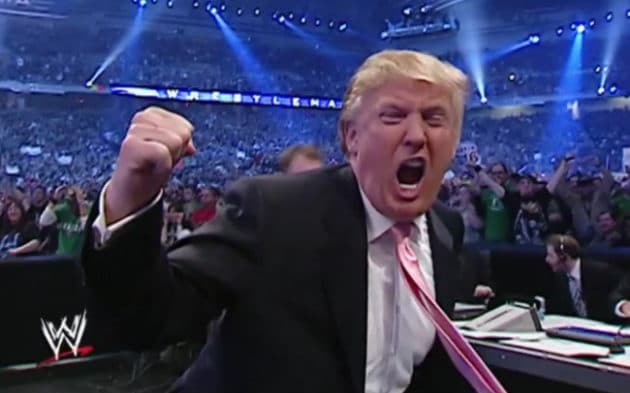 Donald Trump performing in the World Wrestling Federation: “What is at issue here, and throughout his Presidency, is not Trump’s breathtaking ability to lie, but his skill in constructing fantasy.”

Editor’s Note — This is the latest analysis in “America Unfiltered”, the forthcoming joint project between University College Dublin’s Clinton Institute and EA WorldView — originally published on the Clinton Institute website:

And not only in the US. Many liberal democracies are struggling with assaults on the idea that a democracy needs an informed public in order to thrive.

George Orwell’s “ignorance is strength” motto in his distopian novel 1984 illuminated how ignorance could be manipulated to cement the power of authoritarian regimes. However, unlike in Orwell’s Oceania, ignorance today is less the result of repression of information than a superfluity of it, and the manipulation is designed to disorient the public and render all information dubious.

As Steve Bannon, Donald Trump’s former chief strategist puts it, “The way to deal with [the media] is to flood the zone with shit.” The already high levels of distrust of the news media and of expertise, allied with unregulated communications in online and social media, have made this an extraordinarily successful strategy.

See also What is “America Unfiltered”? The Pilot Podcast from the Clinton Institute and EA WorldView

We find ourselves bemused and wearied by the cognitive overload, a sensory bombardment that has become a common ground tone surrounding the Trump presidency — amplified but also normalized by endless cycles of outrage. As Masha Gessen has observed:

The overstimulation of the age of Trump…makes us lose track of time and whatever small sense humans normally have of themselves in history…If we look away for a day, we miss news that seems momentous to others – only to be forgotten, too, in a week. Living in a shared reality with our fellow-citizens is an endless triathlon of reading, talking, and panicking.

“We Need to Think and Analyze”

This overstimulation has been a marked feature of the Trump reality show, driven by disruption and distraction. It has transfixed the US and much of the rest of the world. We need to disengage ourselves from it and reengage our critical faculties and focus.

Experts should not be abashed by their expertise. More than ever, we need to insist on the value of knowledge for, in Craig Calhoun’s articulation, “the ability to judge alleged statements of fact, the ability to put these together in meaningful ways — to ‘connect the dots’ and to understand the implications.”

We need to think and analyze, not only for ourselves. We do so for and with students and others who value critical analysis and informed understanding of the worlds around and beyond us.

But there are lessons to be learned from closely and critically observing American politics and culture today: lessons about the fragility of liberal democracy and about the precarity of what passes for social reality.

Over the last four years, I have reflected on this, but the thoughts united and crashed into my consciousness when Donald Trump tweeted, “The Coronavirus is very much under control in the USA”, and added, “Stock Market starting to look very good to me.”

To say that these are blatant lies is somehow inadequate, just as all the fact-checking pages on liberal media are ineffectual as checks on Trump’s mendacity. What is at issue here, and throughout his Presidency, is not Trump’s breathtaking ability to lie, but his skill in constructing fantasy.

Trump astutely understands his currency as a performer — “I will be so Presidential”, he promised while campaigning — and as a producer. “I play to people’s fantasies,” his ghostwriter summarizes in Trump’s The Art of the Deal.

Trump’s construction of the compelling fantasy for his supporters is one of the most extraordinary features of his presidency, as is his capacity to project this as their desired reality. He is actively creating a “public” through his performances and narratives of that fantasy. His stories connect with his followers in a visceral way, and he imaginatively and emotionally empowers them.

This is a common feature of authoritarian populist leadership, which orchestrates fantasies as interactive fictions for an enraptured audience. Trump’s deceptions are widely endorsed as an alternative reality.

The frightening story is not that Trump lies but that he is mandated to do so — his very performance of lies and fabrications is what designates his reality for supporters.

Thinking About “A Time After Trump”

Trump’s victory and Presidency should remind Americans just how fragile the social and political order — which so many take for granted — is.

Is it not a little shocking that Americans should need to be reminded of this? Perhaps not. Perhaps the amnesia is a component of the American worldview.

In these four years I have been struck by the prescience and insights of writers in the US who are not of the US, particularly those who have lived much of their lives in authoritarian states. Might it be that the import of Trump’s political ascension is better, or at least more readily, understood in other countries where there is a living memory of the pains of populist authoritarianism, where people are more familiar with how reality can be dismantled?

The Slovenian-American writer Alexsandar Hemon suggests as much when, in the wake of Trump’s election, he commented:

In America, a comfortable entitlement blunts and deactivates imagination — it is hard to imagine that this American life is not the only life possible, that there could be any reason to undo it.

Hemon filters his perspective through his experiences and insights from living in Sarajevo during the Bosnian war, “through a time when what cannot possibly happen begins to happen, rapidly and everywhere”.

Russian-American writer Masha Gessen has a similar outsider perspective, informed by her experiences in chronicling culture and politics in Russia. Reflecting on the moral and intellectual challenges posed by Trump’s ascendency, she writes:

Thinking morally about the Trump era requires a different temporal frame. It requires a look at the present through the prism of the future. There will come a time after Trump, and we need to consider how we will enter it. What are we going to take with us into that time — what kind of politics, language, and culture? How will we recover from years of policy (if you can call it that) being made by tweet? How will we reclaim simple and essential words? Most important, how will we restart a political conversation?

These are important questions and they will help guide us as we write, think and converse about the US and its futures.

Gessen is right, “There will come a time after Trump.” This is not only an exhortation to imagine that future, but to prepare for it rationally in the present. We do so by insisting on the value of critical thinking, resisting the reality show, and connecting the dots.