TrumpWatch, Day 1,126: Trump to WikiLeaks’ Assange — A Pardon If You Lie About Russian Hacking 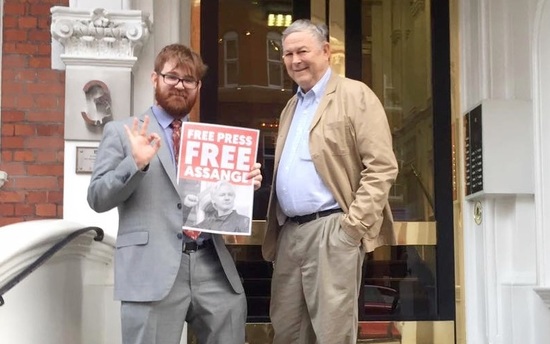 Donald Trump offered WikiLeaks’ Julian Assange a pardon if he lied about Russia’s hacking and dissemination of e-mails to damage Democratic nominee Hillary Clinton in the 2016 US election.

The offer was by US Congressman Dana Rohrabacher during a visit to the WikiLeaks founder in London in August 2017, according to Assange’s lawyers in Westminster Magistrates Court.

Rohrabacher, with long-standing ties to Russian officials, met Assange at the Ecuadorean Embassy. Battling UK charges and extradition to the US, Assange claimed sanctuary in the embassy in June 2012.

Ecuador ended the sanctuary last year, and Assange is now in Belmarsh Prison in southeast London. His extradition hearing opens next week.

Assange’s attorneys told the court of Rohrbacher’s words: “On instructions from the president, he was offering a pardon or some other way out, if Mr Assange … said Russia had nothing to do with the DNC [Democratic National Committee] leaks.”

The visit by the California legislator, who was defeated in his re-election attempt in November 2018, was known at the time. However, he denied any connection to the Trump campaign’s involvement with the Russia interference in 2016.

The Mueller Report, published in April 2019, documents how WikiLeaks received the hacked e-mails and published them in autumn 2016. Trump’s campaign knew of and welcomed the releases.

Listen to EA on Monocle 24: The Trump-Barr Manipulation of Justice

Rohrabacher tried to protect Trump in a statement on his blog:

At no time did I talk to President Trump about Julian Assange. Likewise, I was not directed by Trump or anyone else connected with him to meet with Julian Assange. I was on my own fact-finding mission at personal expense to find out information I thought was important to our country.

At no time did I offer Julian Assange anything from the president because I had not spoken with the President about this issue at all. However, when speaking with Julian Assange, I told him that if he could provide me information and evidence about who actually gave him the DNC emails, I would then call on President Trump to pardon him.

She insisted, “He’s never spoken to him on this subject or almost any subject. It is a complete fabrication and a total lie.”

But Trump does know Roharabacher, having invited the legislator to the White House in April 2017 after seeing the Congressman on Fox TV.

Rohrabacher was known on Capitol Hill for his trips to Moscow and defense of Russia, for example, over US sanctions after Moscow’s annexation of Crimea and effort to split Ukraine in 2014.

Rohrabacher bragged that he was so close to have been so close to Russian President Vladimir Putin that they had a drunken arm-wrestling match in the 1990s. In 2012, the FBI warned the Congressman that Russian spies were seeking to recruit him as an “agent of influence”.

To laughter, then-House Speaker Paul Ryan responded, “This is an off-the-record….NO LEAKS….Alright?”

In September 2017, the White House confirmed that Rohrabacher called Chief of Staff John Kelly to talk about a possible deal with Assange. However, it maintained that Kelly had not passed on the message to Trump.

Rohrabacher wrote yesterday, “I told [Kelly] that Julian Assange would provide information about the purloined DNC emails in exchange for a pardon. No one followed up with me including Gen Kelly and that was the last discussion I had on this subject with anyone representing Trump or in his Administration.”