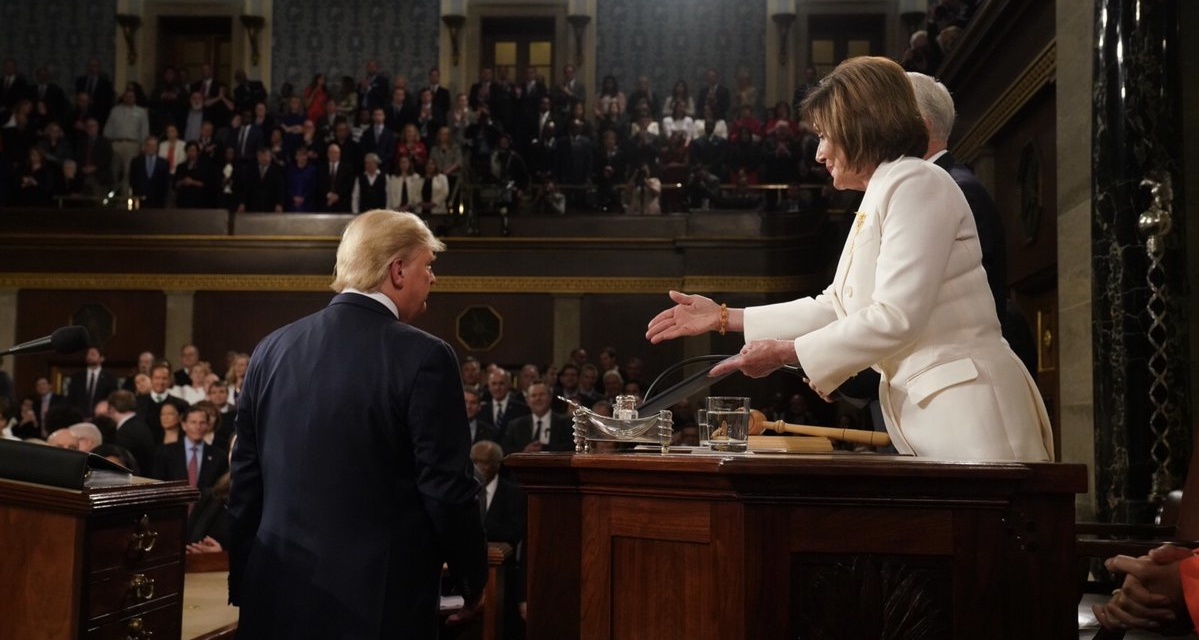 Donald Trump refuses to shake hand of House Speaker Nancy Pelosi before the State of the Union address, US Capitol, February 4, 2020

Seeking a second term in the White House, Donald Trump presents a State of the Union speech marked by division and distortion of America’s political and economic situation.

Trump and his advisors choreographed a performance on Tuesday night — hours before Republicans bury Trump’s impeachment trial today — which tried to set Americans against a “radical left” comprised of “socialists”, “illegal aliens”, Democrats, and other enemies within the US.

And hoping for the liferaft of an economy which does not dip further before November’s election, Trump blatantly altered the US economic record to proclaim a “great American comeback”. He covered up a recovery that began after the Great Recession of 2008, ignored a 2019 growth rate which was the slowest since 2016, and hid the more than $1 trillion cost of his trade wars, including with China and allies such as the European Union, South Korea, and Japan.

See also EA on Monocle 24 and BBC: Trump’s Damaged State of the Union; The Democrats in Iowa

In a speech which had the flourishes if not the style of Ronald Reagan — Trump was fixed to his teleprompter for much of the address — he read out a script of “America’s enemies are on the run, America’s fortunes are on the rise, and America’s future is blazing bright”.

But the presentation was marked as much by Trump’s gestures of division, backing up declarations that “socialism destroys nations” and — after lying about Administration’s proposals trying to replace ObamaCare and about “free taxpayer-funded healthcare to millions of illegal aliens” — “we will never let socialism destroy American healthcare”.

Trump refused to shake the extended hand of House Speaker Nancy Pelosi before the speech. During it, he broke protocol by awarding the Presidential Medal of Freedom to Rush Limbaugh, the polemicist at the forefront of “attack radio” deriding the “Left”, “FemiNazis”, and people of color since the 1980s.

Showing disdain during the address for Trump’s attacks and lies, Pelosi countered after Trump finished by standing up and ripping up a copy of the “dirty speech”.

The manifesto of mistruths presented in page after page of the address tonight should be a call to action for everyone who expects truth from the President and policies worthy of his office and the American people. #SOTU https://t.co/7rUFbhWDDQ

The Trump camp tried to seize on the gesture as proof of the extremist threat: “Speaker Pelosi just ripped up: One of our last surviving Tuskegee Airmen. The survival of a child born at 21 weeks. The mourning families of Rocky Jones and Kayla Mueller. A service member’s reunion with his family.”

The spectacle overtook the lack of accuracy in Trump’s speech. His claim of adding 12,000 new factories tried to cover up a small increase of less than 50,000 new jobs in manufacturing in 2019 — the second-worst annual change since 2009.

He said nothing about the record rate of farm bankruptcies or of the economic damage of the trade wars that he launched in March 2018. His boasts about jobs ignored that the rise is smaller than that during President Barack Obama’s second term.

And he never mentioned that the 2.3% growth rate in 2019, the slowest in three years, fell far short of the Administration’s target of 3%.

It doesn’t matter what the president says about the stock market. What matters is that millions of people struggle to get by or don’t have enough money at the end of the month after paying for transportation, student loans, or prescription drugs.

In the Congressional chamber, many female Democratic legislators were dressed in white, representing the suffragist movement and women’s rights. Several, such as Reps. Alexandria Ocasio-Cortez and Ayanna S. Pressley, boycotted the speech.

After much deliberation, I have decided that I will not use my presence at a state ceremony to normalize Trump’s lawless conduct & subversion of the Constitution.

None of this is normal, and I will not legitimize it.

Consequently, I will not be attending the State of the Union.

When Trump tried to claim he lowered drug costs, House Democrats stood up and chanted “HR 3” in tribute to the late Rep. Elijah Cummings, who introduced the Lower Drug Costs Now Act. There were cries of “No” when Limbaugh was awarded the Presidential Medal of Freedom.