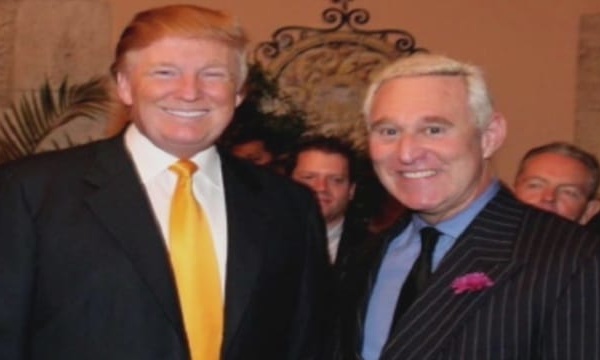 Through the Justice Department, Donald Trump intervenes to reduce the prison sentence for his friend, “dirty tricks” aide, and Trump-Russia operative Roger Stone.

Four prosecutors immediately stepped down on Tuesday after their sentencing recommendation of seven to nine years in prison for Stone, convicted in November of lying to Congress and witness tampering, was overturned by senior Justice Department officials.

Timothy Shea, the interim head of the US Attorney’s office in Washington and a longtime aide to Attorney General William Barr, submitted a new filing that made no suggestion of time in prison: “Ultimately, the government defers to the court as to what specific sentence is appropriate under the facts and circumstances of this case.” The document emphasized that Stone is a senior citizen with no prior criminal record.

The prosecutors only learned of the new filing after it was reported by Fox News. Three withdrew from the case, and the fourth resigned from the Justice Department entirely.

This is a horrible and very unfair situation. The real crimes were on the other side, as nothing happens to them. Cannot allow this miscarriage of justice! https://t.co/rHPfYX6Vbv

Sources inside the Administration suggested that Attorney General Barr, appointed in January 2019 in part to protect Trump over the Trump-Russia inquiry, quickly followed up on the tweets.

Documenting the Trump campaign’s links with Russian intervention in the 2016 US election, the Mueller Report set out how Stone acted as a liaison with WikiLeaks, which published the e-mails stolen by Russia to undermine Democratic nominee Hillary Clinton.

Stone was convicted of obstructing the House Intelligence Committee’s inquiry into Russian interference in the 2016 election, lying to investigators under oath, and trying to block the testimony of an associate in the operation between the Trump campaign and WikiLeaks.

After the Justice Department’s intervention, Trump attacked the prosecutors “who cut and ran after being exposed for recommending a ridiculous 9-year prison sentence”. He tried to use his pressure to bury the reality of Trump-Russia links in the Mueller Report: “[They] got caught up in an investigation that was illegal, the Mueller Scam.”

Trump also attacked the presiding judge, Amy Berman Jackson of the Federal District Court in Washington. He falsely said that she was responsible for worse treatment for ex-Trump campaign manager Paul Manafort than “even mobster Al Capone had to endure”.

Jackson handled one of two criminal cases resulting in a 7 1/2-year prison term for Manafort, convicted over fraud and other financial crimes. Prison officials, not the judge, set the conditions of Manafort’s confinement.

Justice Department spokeswoman Kerri Kupec insisted that officials did not discuss the case with anyone at the White House and were not reacting to any directive from Trump.

Trump later told reporters that he had not discussed the case with anyone in the department.

But David Laufman, a former chief of the Justice Department’s counterintelligence unit, spoke of an unprecedented situation:

This is a “break glass in case of fire” moment. We have now seen the political leadership of the department, presumably acting on the president’s desires, reaching down into a criminal case to withdraw a reasoned sentencing recommendation to the court.

In the initial sentencing memorandum, the prosecutors noted that Stone — a self-proclaimed specialist in “dirty tricks” — threatened a witness with bodily harm, deceived congressional investigators, repeatedly lied under oath, and forged documents. After he was indicted, Stone threatened violated court orders for silence on the case, threatening Jackson on social media.

Memo to all career DOJ employees

This is not what you signed up for. The four prosecutors who bailed on the Stone case have shown the way. Report all instances of improper political influence and other misdeeds to the DOJ IG, who is required to protect your identity.

And Mary McCord, head of the Justice Department’s national security division in both the Obama and Trump Administrations, assessed, “The department has to seriously consider what impact a reversal that appears to be in response to the president’s displeasure will have on its credibility and reputation in the courts.”