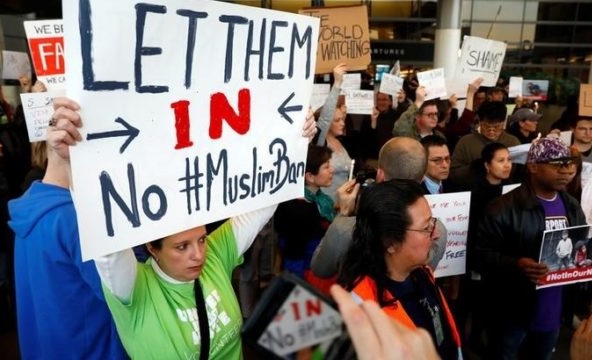 The Trump Administration adds six countries to its “Muslim ban” preventing citizens of mainly-Muslim countries from entering the US.

While media attention was focused on Trump’s impeachment trial, the Administration announced on Friday that restrictions are being placed on Nigeria, Eritrea, Sudan, Tanzania, Kyrgyzstan, and Myanmar, where the country’s Muslim minority is fleeing mass killings.

Immigrant visas, for those seeking to live in the US, will be banned for Myanmar, Nigeria, Eritrea, and Kyrgyzstan. Immigrants from Sudan and Tanzania will be blocked from moving to the US through the diversity visa lottery, which grants green cards for up to 50,000 people each year.

More than 12,300 potential immigrants are likely to be hindered in the next year from resettling, finding work, and/or being united with families. The US issued more than 7,920 immigrant visas to Nigerians in the 2018 fiscal year.

Krish O’Mara Vignarajah, president of the Lutheran Immigration and Refugee Service, noted, “Nearly 5,000 Burmese refugees started to rebuild their lives in America last year, many of whom seek to reunite with family still in harm’s way.”

The order takes effect on February 22. Non-immigrant visas, including those for students, some temporary workers, and potential employees with specialized skills, will continue.

Immigrants can apply for waivers from the restrictions. Trump officials have said waivers will be issued to those who would experience undue hardship if denied entry, but the process has been criticized for a lack of clarity.

There are now 13 countries on the restricted travel list pursued by the Trump Administration, overcoming court challenges, since Trump’s first week in office in January 2017.

More than 135 million people in seven countries were already affected before Friday. Almost all are from the mainly-Muslim countries of Iran, Libya, Somalia, Syria, and Yemen. North Korea and Venezuela are also on the list.

During his campaign, Trump pledged “a total and complete shutdown of Muslims entering the United States until our country’s representatives can figure out what the hell is going on”. Even before he took office, White House chief strategist Steve Bannon and anti-immigrant advisor Stephen Miller pursued the measure.

On January 27, a week after his inauguration, Trump signed an executive order completely shutting out immigrants from seven mainly-Muslim countries. The ban sparked chaos and protests at US airports, with lawyers and activists assisting those who already held visas.

After a series of legal challenges, the Supreme Court upheld a modified ban on a 5-4 decision in June 2018.

The revised restrictions enabled US officials to block visas before citizens of the seven countries travelled to the US. The State Department says almost 80,000 visas have been blocked since December 2017.

Officials with the Department of Homeland Security and the State Department said Eritrea, Tanzania, and Kyrgyzstan are being added to the list because each has not satisfied the administration’s information-sharing requirements over terrorism or have not updated passport systems.

The officials said Sudan remains a state sponsor of terrorism, despite a civilan-run government replacing military rule in August 2019.