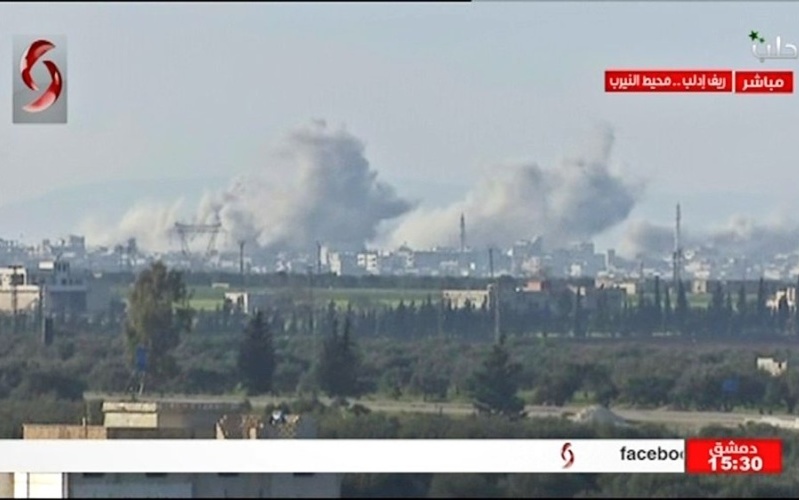 After weeks of warnings, Turkey has defied Russia and sent troops to the frontline in Idlib Province in northwest Syria.

Turkish troops accompanied anti-Assad fighters in an attack after a Russian-regime offensive occupied the town of Nayrab.

The Turkish-rebel assault, which reportedly downed two Russian drones, inflicted casualties and scattered pro-Assad troops. Russian airstrikes forced the Turkish-rebel to pull back from Nayrab, southeast of Idlib city; however, a local activist said that while “Assad gangs” are in the town, “their military force is weak”.

The Turkish Defense Ministry said that two of its soldiers were killed and five were wounded, but that 50 pro-Assad troops had been slain.

Nayrab is between Idlib city and the town of Saraqeb, at the junction of the Damascus-to-Aleppo M5 highway and the cross-Idlib M4 route.

In late January, Turkish President Recep Tayyip Erdoğan finally criticized Russia by name as he demanded that Assad regime forces withdraw from Idlib Province by the end of February.

After Saraqeb fell, Erdoğan stepped up his warnings and Turkey began sending reinforcements to a ring of 12 observation posts around Idlib and northern Hama Province. The posts have been surrounded and rendered ineffectual by the Russian-regime offensive that began last April, killing more than 1,800 civilians and displacing more than a million.

Turkey refrained from putting its soldiers on the frontline; however, it covertly stepped up anti-aircraft missiles, weapons, and equipment to anti-Assad forces.

On Wednesday, the Turkish President declared, “Frankly speaking, the Idlib operation is a matter of time. Turkey will not leave Idlib to the Assad regime and its backers, who have not comprehended the determination of our country regarding this matter.”

But after the Kremlin tried to play down the statement as “a worst-case scenario”, Ankara decided to issue its military signal with the Nayrab operation, shaking Turkish-Russian cooperation over Syria after a reconciliation between Erdoğan and President Vladimir Putin in August 2016.

A well-placed local analyst confirmed to EA WorldView that Turkish forces fired an anti-aircraft missile on a Russian jet: “The jet escaped, but it’s a clear message that Turkey doesn’t tolerate everything [from Moscow].”

The Russian Defense Ministry acknowledged the confrontation, but tried to minimize it, saying only four pro-Assad fighters had been wounded.

The Ministry did not mention Turkish troops in its statement, “So as not to allow the armed groups to make it deep into Syrian territory, Russian Su-25 aircraft carried out a strike…on the armed militant groups that burst through.”

In the past two weeks, two sets of Russian-Turkish talks, one in Ankara and one in Moscow, have broken up in tension as Moscow refused to halt the offensive.

Turkish Defense Minister Hulusi Akar said early Thursday that problems could be overcome if Russia “steps aside” with an agreement on the use of airspace above Idlib Province — effectively the protection zone that has been discussed but never implemented since 2012 by Western powers. Turkish officials added the possibility of joint patrols with Russian forces, mirroring operations being pursued in mainly-Kurdish areas of northeast Syria.

Akar said the US could send Patriot missile systems to Turkey to bolster security.

Meanwhile, UN officials continued to warn of the humanitarian crisis from the more than 1 million displaced who are trapped between the Russian-regime offensive and a Turkish border closed in 2016.

The officials called for a halt to fighting so civilians could find safety. However, Russia and the Assad regime have paid no heed to repeated statements, and the international community — with the exception of Turkey — has not backed up the UN appeals.

“We want the whole world to see us and learn about our conditions, the children and these camps,” said Ruqyyah Omar, who is now at a camp near Azaz, close to the Turkish border.

Abu Abdallah — stranded on the road with his wife, four children and 20 relatives — said, “I don’t know where to take them. God knows where we will go.”