Syria Daily: Russia Says No to Turkey on Idlib as Assad Forces Kill Another Turkish Soldier 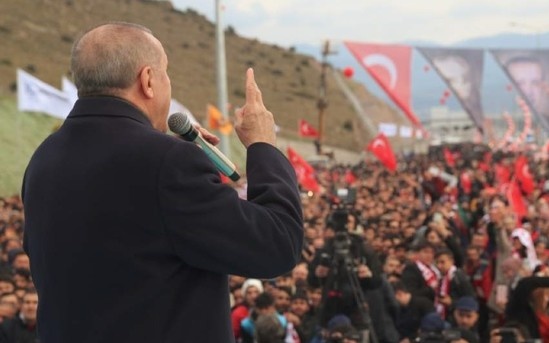 Russia’s Vladimir Putin has pushed back the demand of Turkish President Recep Tayyip Erdoğan for the halt of a 9 1/2-month Russian-regime offensive in Idlib Province in northwest Syria.

Putin also rejected Erdoğan’s deadline of February 29 for a withdrawal of regime forces from Idlib, amid an offensive which has killed more than 1,800 civilians, wounded thousands, and displaced more than 1 million.

Offically, Erdoğan’s office is still saying that both leaders expressed their commitment to “all agreements”, including the September 2018 “de-escalation zone” around Idlib and northern Hama Province which was shattered by last April’s offensive.

And the Turkish President — who is seeking a four-way meeting with Putin, German Chancellor Angela Merkel, and French President Emmanuel Macron on March 5 — said he had spoken by phone with all three leaders on Friday.

“The Idlib issue is at least as important as Afrin and the Peace Spring area [Turkey’s intervention from August 2016 which took over most of a Kurdish canton in northwest Syria]. I clearly expressed our determination on this matter to Putin yesterday,” he told a ceremony in Izmir yesterday.

But Putin made no commitment to a meeting, and Russian State outlets continued to represent the offensive as “counter-terrorist efforts“. The Russian media also did not mention Turkey’s first intervention on the Idlib frontline on Thursday, joining rebels in an infantry attack on Nayrab, between Idlib city and Saraqeb.

Two Turkish troops were killed and five injured, while Ankara claimed the killing of more than 50 pro-Assad fighters.

The pro-Assad force, which had occupied Nayrab earlier in the week, scattered. But Russian bombing ensured that the town was not reclaimed by Turkey and the rebels.

Erdoğan’s spokesman Fahrettin Altun went farther than the President in challenging Moscow by name, “[He] expressed his concerns about Idlib to President Putin in a phone call. Russia’s support for the Assad regime worsens the already terrible humanitarian situation.”

Altun warned, “We will not shy away from protecting our own forces against any threats. Nobody should test our resolve….We have been counting on Russian cooperation. We will seek to secure our national security regardless.”

The Turkish Defense Ministry said a tank mechanic was killed on Saturday in a bomb attack by pro-Assad forces.

The fatality is the 16th this month. Turkey responded to pro-Assad shelling that slew 13 troops and a civilian contractor, claiming that it “neutralized” more than 200 regime fighters, before its frontline intervention on Thursday.

Erdoğan has warned for weeks of Turkish intervention as he demanded the regime withdrawal. He is alarmed by the displacment of the more than 1 million civilians — out of 3 million in the greater Idlib area, about 20% of Syria’s remaining population — who are trapped between the offensive and a Turkish border closed in 2016.

Turkish Defense Minister Hulusi Akar had indicated on Thursday that Ankara would seek an agreement with Russia on use of airspace over Idlib — effectively setting up a protection zone for civilians against bombing — and joint patrols.

The two countries have a similar arrangement for northeast Syria, where Turkey moved into two Kurdish cantons in October 2019.

The Assad regime reacted on Saturday, with a military official insisting that any Turkish flight over Syrian airspace “will be dealt with as an enemy military target”.