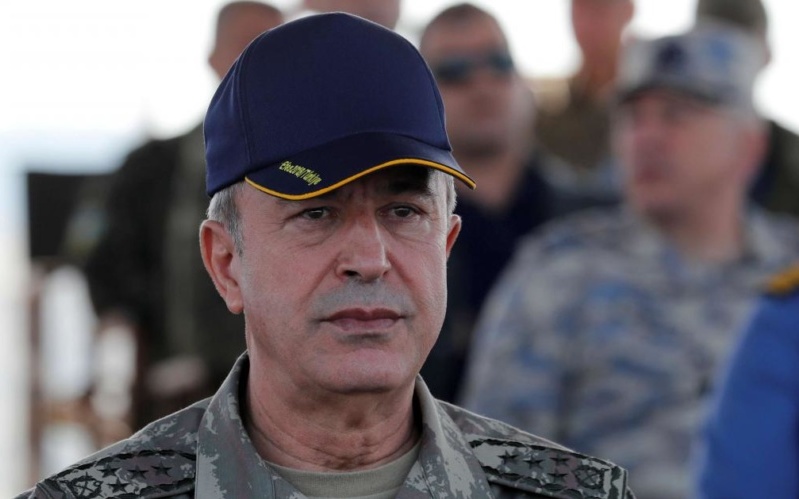 He confirmed that seven Turkish troops and one civilian contractor were killed at a control point, west of the town of Saraqib in southeast Idlib Province, late Sunday.

President Recep Tayyip Erdoğan said earlier that Turkey used F-16 fighter jets in its first significant attacks on Assad regime forces since Ankara intervened in northern Syria in August 2016, initially working with anti-Assad forces to drive out the Islamic State and then to occupy most of the Kurdish canton of Afrin.

Before flying to UKraine, Erdoğan said, “We are determined to continue our operations for the security of our country, people and our brothers in Idlib. Those who question our determination will soon understand they made a mistake.”

He added on arrival in Kyiv that the situation in Idlib had become “unmanageable”.

Russia and the regime launched their offensive in late April, breaking a “de-escalation zone” around northern Hama and Idlib Province. The assault has seized almost all of northern Hama and part of southern Idlib.

The assault killed more than 1,500 civilians, wounding thousands, and displacing more than 800,000. The displaced have moved closer to the Turkish border, closed in 2016 after Turkey took in 3.6 million Syrian refugees.

Russian President Putin and Erdoğan declared the de-escalation zone in September 2018, but Turkey has been held back by Moscow from checking the offensive. The Kremlin has invoked the Astana process, the series of talks between Turkey, Russia and Iran purportedly seeking a political resolution since January 2018.

A ring of 12 Turkish observation posts was pushed aside during the offensive, some shelled by pro-Assad forces. Last August, Ankara tried to move forces to southern Idlib to set up a line against a Russian-regime advance in southern Idlib. But Russia bombed the M5 highway, blocking the convoy, and the offensive seized the town of Khan Sheikhoun, which was hit by a regime sarin attack in April 2017.

Last week Erdoğan finally named Russia in his warning, “We have waited until now, but from this point, we are going to take our own actions.”

The President said he would no longer pursue the Astana process: “[The regime is] continuously threatening our country with migration….We will not shy away from doing whatever is necessary including using military force.”

His statements were backed up by Turkish convoys, including mechanized vehicles, moving to the town of Saraqeb, 15 km (9 miles) southeast of Idlib city.

The town sits on the M4 highway, which runs east-west across Idlib, and the M5 from Aleppo to Damascus.

The Russian Defense Ministry played down Monday’s developments, saying Turkish warplanes had not violated Syria’s border and no airstrikes had been recorded.

A spokesman tried to shift the focus to anti-Assad force, saying the Kremlin remains concerned about “militants” near Saraqeb.

The Assad regime’s State news agency SANA ignored the Turkish strikes, instead proclaiming that villages had been “liberated” in the area and “terrorists” were being “pursued”.