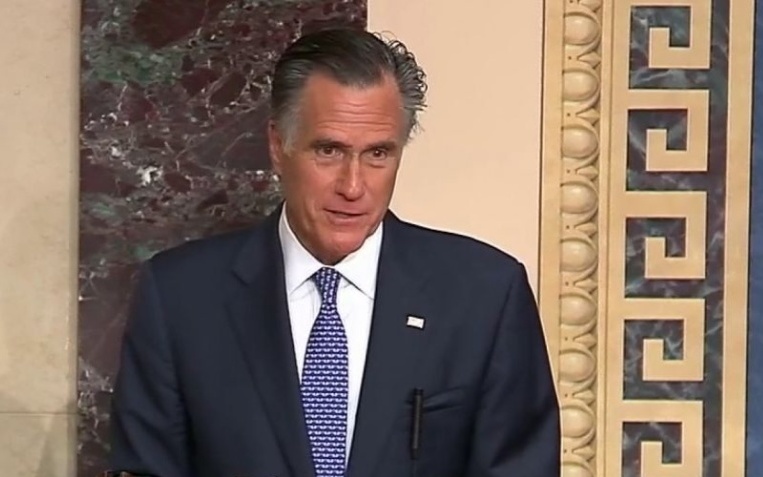 Sen. Mitt Romney, Washington, February 5, 2020, on Trump abuse of power: “A flagrant assault on our electoral rights, our national security interests, and our fundamental values”

Sen. Mitt Romney defies the Republican leadership’s protection of Donald Trump, making history as he voted to convict Trump on the impeachment charge of abuse of power.

Romney announced his decision in an emotional but forensic statement on Wednesday, before the Senate voted 52-48 not to convict Trump over his pressure on Ukraine to investigate political rivals.

The grave question the Constitution tasks senators to answer is whether the President committed an act so extreme and egregious that it rises to the level of a “high crime and misdemeanor.”

The President’s purpose was personal and political.

Accordingly, the President is guilty of an appalling abuse of the public trust.

The Utah legislator, the 2012 Republican nominee for President, is the first senator in US history to vote for the conviction of a President of his/her own party.

Romney was one of two senators to vote last Friday for a trial with witnesses and documents, withstanding the pressure from the White House and Senate Majority Leader Mitch McConnell.

The Trump camp feared that up to a dozen GOP senators would defect, after revelations by former National Security Advisor John Bolton of Trump’s freeze on Ukraine military aid until investigations were announced. But five days of McConnell’s maneuvers and warnings from the White House whittled down the possible dissidents.

See also EA on Monocle 24: How Republican Protection of Trump Damages US System

Romney spoke of the pressure, which Trump’s inner circle maintained up to the final votes. He rebuffed Trump’s insistence of a “perfect call” on July 25 with new Ukraine President Volodymyr Zelenskiy — a call that sparked a formal complaint and then the impeachment hearings:

What [Trump] did was not “perfect” — No, it was a flagrant assault on our electoral rights, our national security interests, and our fundamental values. Corrupting an election to keep oneself in office is perhaps the most abusive and destructive violation of one’s oath of office that I can imagine….

I am aware that there are people in my party and in my state who will strenuously disapprove of my decision, and in some quarters, I will be vehemently denounced. I am sure to hear abuse from the President and his supporters. Does anyone seriously believe I would consent to these consequences other than from an inescapable conviction that my oath before God demanded it of me?

The White House was caught off-guard and Trump infuriated that he could not take a victory lap of total Republican support.

As Romney predicted, Trump responded on Twitter with a one-minute attack video, further insults, and his mantra, “Read the Transcripts!”

The pro-Trump attack site Breitbart devotes its entire headline section to seven anti-Romney articles, including the promotion of the video circulated by Trump. There are more assaults in its e-mail newsletter under the banner, “Romney is a Total Disgrace”.

Fox turns over its top story to one of its polemicists, Laura Ingraham: “Ingraham Considers Running Against ‘Self-Centered’ Romney for Senate After His Impeachment Vote”.

But the effect of the vitriol is only to draw attention further from Trump’s supposed vindication. The White House had hoped that at least one Democrat, such as Joe Manchin of West Virginia, would vote not to convict.

In the end, Manchin stood firm. And while Sen. Susan Collins — the other Republican to vote for witnesses and documents — balked at conviction, saying she thought Trump would “learn” from the impeachment experience, Romney changed the narrative.

Trump tried to recover last night with another video proclaiming that he will be President through the year 90,000, and the announcement that he will make a statement at noon Washington time on Thursday.

However, Dr Adam Quinn of the University of Birmingham highlights the significance of Romney’s decision.

Given the current dynamics of the Republican Party this truly is a profile in political courage. It makes no difference to the outcome, but when careers have ended and characters are evaluated, this should really count for a lot in Romney’s ledger.