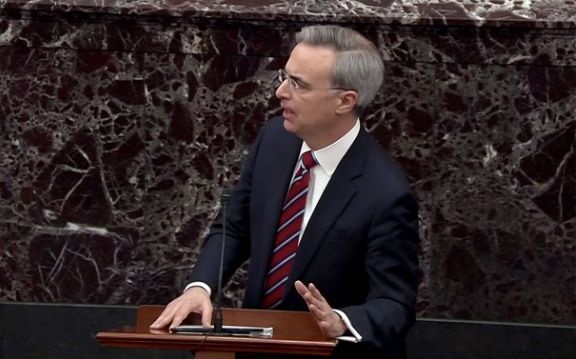 In the Senate trial of Donald Trump, his attorneys avoid the substantial evidence of his abuse of power and obstruction of Congress, preferring to attack the process and make distorted and sometimes false assertions.

White House counsel Pat Cipollone, his deputy Mike Purpera, and Trump’s attorneys Jay Sekulow and Patrick Philbin make their opening statements on Saturday. They followed 24 hours of presentation over three days from House managers, setting out Trump’s campaign of pressure against Ukraine for investigations to undermine Presidential candidate Joe Biden and cover up Russia’s involvement in the 2016 US election.

Rather than address the weight of documents and testimony — marked by more than 28,000 pages in the House hearing, delivered to the Senate on Saturday morning — the attorneys made unsupported claims that the trial was prompted by an effort to undo Trump’s 2016 victory and prevent him from standing in 2020. Cipollone asserted:

To stop an election, to interfere in an election and remove the President of the United States from the ballot? Let the people decide for themselves.

The defense repeated Trump’s tweets of “NO PRESSURE” and “Perfect Call!” over his July 25 phone conversation with Ukrainian President Volodymyr Zelenskiy, seeking the investigations. They insisted that Trump did not seek a “quid pro quo”, ignoring the detailed testimony from current and former US officials setting out Trump’s freeze on $391 million in security assistance until Ukraine complied with his demands.

Among the falsehoods was the claim that Kyiv did not know about the freeze, ordered in early July, until late August. In fact, Ukrainian officials knew about the suspension within days.

The attorneys insisted that the CIA official making the formal complaint over Trump’s call with Zelenskiy, setting off the process that led to impeachment, was politically biased — ignoring that the intelligence community’s Inspector General said this had no bearing on the complaint and its significance.

They tried to claim that the release of the assistance on September 11 undercut the prosecution case, neglecting to mention that the lifting of Trump’s freeze only came after media reports linking the suspension to Trump’s demands and after legislators were formally notified of the CIA officer’s complaint.

And they attacked Rep. Adam Schiff, the lead House manager, recycling the distortion that Schiff read out a “fake” transcript of the Trump-Zelenskiy call at a House hearing.

The attorneys tried to turn the brevity of their Saturday appearance — a sign of the lack of engagement with the detail of the House managers — into an asset.

“I am not going to continue to go over and over and over again the evidence that they did not put before you. Because we would be here for a lot longer than 24 hours,” Sekulow said.

Opening the Door for Witnesses?

Democrats seized on the presentation as an opening for the witnesses and documents being blocked by Senate Majority Leader Mitch McConnell. Minority Leader Chuck Schumer explained:

Sen. Elizabeth Warren assessed, “I think they made a very strong case for why we need witnesses. I feel like I heard the language that cross examination is one of the most important parts to getting to the truth. So fine, let’s bring in the witnesses so we can do cross examination.”

Schumer is seeking testimony from officials with first-hand knowledge of Trump’s aid freeze and the 10-month campaign by Trump and his personal attorney Rudy Giuliani for Ukraine’s investigations. They include former National Security Advisor John Bolton, White House Chief of Staff Mick Mulvaney and his chief aide Robert Blair, and Michael Duffey, the top political appointee at the Office of Management and Budget.

A vote on admission of the witnesses and documents will be held after the presentations and questioning by Senators. Four of the 53 Republican legislators need to defy Trump and McConnell for the trial to be opened to the testimony and additional evidence.

One of the key Republicans — Sen. Mitt Romney, the 2012 Presidential nominee — said he was leaning towards admission of the witnesses.