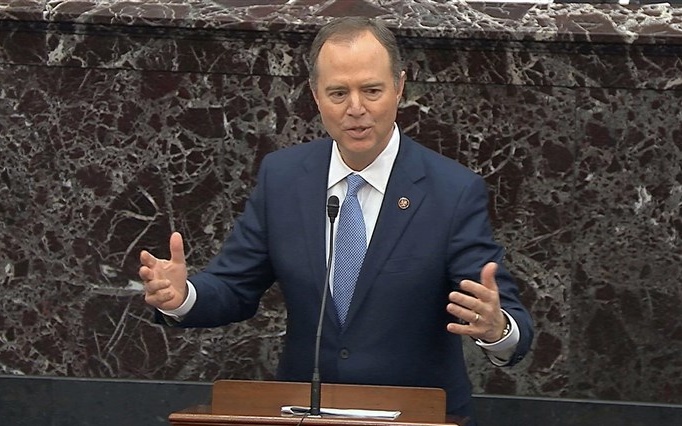 Rep. Adam Schiff concludes the case in the trial of Donald Trump, January 24, 2020

I spoke with BBC Radio Wales’ Oliver Hides on Saturday morning about the state of the trial of Donald Trump.

These allegations are as serious as, arguably more serious than, the allegations that brought down Richard Nixon in the 1970s.

The stories about fidget spinners and some Republican senators doing crosswords and reading books rather than listening to the presentations is a demonstration that — for some in the Republican Party — no matter how serious the allegations, they don’t want to hear anything about them.

ORIGINAL ENTRY: House managers conclude their case against Donald Trump for abuse of power and obstruction of Congress, asking Senators to “give America a fair trial”.

The seven managers set out how Trump endangered US and Ukraine national security with his campaign for investigations to tarnish Democratic candidate Joe Biden and to cover up Russia’s involvement in the 2016 election. They detailed Trump’s freeze of $391 million in security assistance, even as Kyiv faced the Russian-supported political and military effort to split the country.

The managers also explained how Trump tried to block any exposure of his acts by ordering current and former US officials not to testify or hand over documents in the House impeachment hearings — a blockade continued legally by Senate Majority Leader Mitch McConnell as he tries to prevent any testimony or new information in the trial.

Lead manager Rep. Adam Schiff summarized, “This is Trump first, not America first, not American ideals first. And the result has been, and will continue to be, grave harm to our nation if this chamber does not stand up and say this is wrong.”

He concluded the 24-hour case:

How long is too long to have a fair trial? Fair to the President and fair to the American people. The American people do not agree on much but they will not forgive being deprived of the truth and certainly not because it took a backseat to expediency.

Rep. Jerry Nadler drove home the seriousness of Trump’s conduct: “He is a dictator. This must not stand.”

Demings said of Trump’s command to officials not to comply subpoenas:

Only one person in the world has the power to issue an order to the entire executive branch,” said Representatives Val B. Demings, Democrat of Florida. “And President Trump used that power not to faithfully execute the law, but to order agencies and employees of the executive branch to conceal evidence of his misconduct.”

Schiff continued his meticulous definition of Trump’s involvement with Russia and Ukraine, beginning with the 2016 campaign when Trump welcomed the Russian hacking of Democratic candidate Hillary Clinton and her staff.

He walked through Trump’s repeated demeaning of US intelligence agencies over Moscow and Russia’s interference, and Trump’s appeal to China to join in the stealing of information from his political rivals.

Schiff played a video of Trump’s July 2018 news conference alongside Russian President Vladimir Putin in Helsinki, Finland. Responding to the playback of Trump’s choice of Putin over US intelligence services, Schiff said, “That’s one hell of a Russian intelligence coup. They got the President of the United States to provide cover for their own interference with our election.”

The California Democrat also played a clip of the late Sen. John McCain, warning of the Russian attempt — after Moscow’s 2014 annexation of Crimea — to break up Ukraine.

But Republican Senators who spoke publicly defied the Constitutional oath to be “impartial jurors”, unwavering in their excuses for Trump.

Roger Wicker of Mississippi said, “I do things every week that are inappropriate….This is a constitutional remedy that was designed for the most extreme of cases and we’re just not anywhere in that park.”

Roy Blunt of Missouri swept away the call for close consideration of the evidence:

Our job is not to evaluate in great detail what happened. Our job at this point is to evaluate whether it’s impeachable or not. And I don’t see minds changing on that, including mine.

Marsha Blackburn of Tennessee read Resistance at All Costs by Kim Strassel, a polemic that a “resistance” is trying to drive Trump out of office.

First – I'm reading Resistance (At All Costs) by Kim Strassel. Read the chapter on obstruction. It provides good insights into today’s proceedings.

Second – busy mamas are the best at multi-tasking. Try it. https://t.co/AEHW19ZztL

The managers need four of the 53 Republicans to join Democrats to break McConnell’s blockade of documents and witnesses such as former National Security Advisor John Bolton and White House Chief of Staff Mick Mulvaney.

Outside the trial, Democrats were bolstered by an audio of Trump demanding the dismissal of US Ambassador to Ukraine Marie Yovanovitch, prominent in anti-corruption efforts.

On the tape from 2018, Trump tells a small dinner group including Lev Parnas, the point man in the 10-month campaign of Trump and his attorney Rudy Giuliani pressing Ukraine for the investigations:

Giuliani and Parnas spread disinformation to undermine Yovanovitch, seen as a barrier to the effort against Biden. She was finally removed from Kyiv by Trump in April 2019, just after the election of President Volodymyr Zelenskiy.

Three months later, Trump asked Zelenskiy in a phone call for the investigations, sparking a formal complaint — by the CIA liaison with the White House on Ukraine — and then the impeachment hearings.

The tape demolished Trump’s assertion that he did not Parnas, who has been indicted for campaign finance violations.

Earlier this month a court order finally allowed Parnas’s e-mails and texts to be given to the House. They detail the Trump-Giuliani pursuit of the investigations, with Parnas saying in interviews that Trump commanded the campaign.

But inside the trial, Senate Majority Whip John Thune justified Trump’s possible abuse of power, “As everybody sort of knows, he’s very unconventional. And I think a lot of people when they voted for him, that was baked in and they knew what they were getting.”