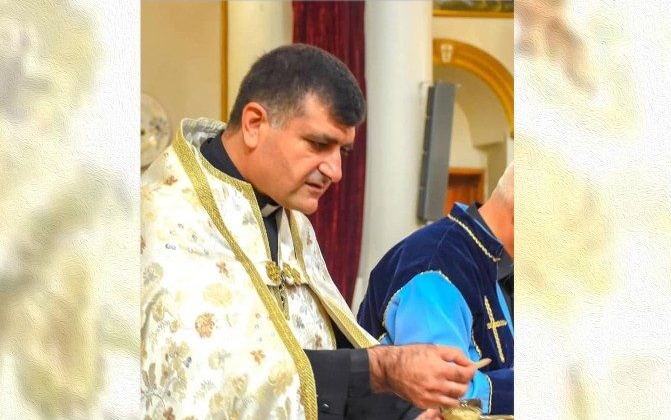 From the start of the Syrian uprising in March 2011, the Assad regime has portrayed anti-Assad groups as hostile to Christians, carrying out sectarian attacks.

The contest has taken a turn in recent months, however, amid Turkey’s cross-border offensive into two Kurdish cantons in northeast Syria.

Ammar Hamou and Will Christou describe Turkish-backed anti-Assad fighters of the Syrian National Army cleaning an Armenian Christian church in Tel Abyad, one of the mainly-Kurdish towns occupied in October’s offensive.

Turkish media published videos of the church with whitewashed walls and scrubbed pews as it was reopened to the congregation. SNA troops brought back artefacts which had been looted by compatriots.

The director of the Sweden-based Assyrian Monitor for Human Rights, Jameel Diarbakerli, says Kurdish groups are also trying to present themselves as protectors of Christians in the multi-sided contest in Syria.

The outcome, Diarbakerli says, is that Christians feel as if they are being “exploited in an ugly way”.

The contest follows violent attacks against Christians during the Turkish offensive, which has been followed by Ankara’s agreement with Russia for military oversight of the area along the border as Turkish President Recep Tayyip Erdoğan aims to resettled 1 million Syrian refugees in the territory.

The priest of an Armenian Catholic church in Qamishli, Ibrahim Hanna Bedoyan (“Father Hovsep”), and his son were assassinated in Deir ez-Zor in eastern Syria on November 11 as they supervised the restoration of a local church. On the same day, two car bombs in the city of Qamishli targeted churches and shops and hotels owned by local Christians.

The Syrian Kurdish Democratic Party (PYD) called on the international community to “handle their responsibility towards the constituent peoples of northeast Syria who defeated terrorists on behalf of the rest of the world”.

But while the Islamic State claimed responsibility for the assassination of Bedoyan and his son, questions are being asked of the Kurdish factions. The Vice President of Syrian Christians for Peace, Dr. Samira Moubayed, noted the attacks in territory controlled by the Kurdish-led Syrian Democratic Forces and claimed the SDF has “allied and cooperated with the Assad regime”.

The event reminded us of what the Assad regime did for so many decades before — from bombings to suicide attacks in urban areas — to create chaos and fear of terrorists.

Diarbakerli summarizes that Christians are a “scapegoat” for all parties: “When the regime wants to hurt the opposition, they target the Christians. The opposition, Kurds, Turks, and Russians all do the same thing.”

Caught in the Middle of a Revolution

From the beginning of the Syrian uprising, the Assad regime sought to arm the Christian community, encouraging members to join State intelligence and security services and to form militias.

But Moubayed notes the refusal of Christians because of a “culture that leads them to eschew violence and fighting”: “[They] preferred to send their children abroad than to sacrifice them on the frontlines.”

In September, the Syrian Network for Human Rights documented “124 incidents of assaults against Christian worship sites” during the uprising. Of the attacks, 75 were by the Assad regime, 35 by anti-Assad groups, 10 by the Islamic State.

The SNHR says about 450 Christians, including 28 women, have been arrested in regime-controlled areas since 2014. 28 of which are women. Only 165 have been released to date.

Before its expulsion from Syria’s cities, towns, and villages, the Islamic State also abused Christians, charging them a tax on non-Muslims and prompting many to flee. The hardline Islamist bloc Hay’at Tahrir al-Sham displaced Christians from areas that it seized in northwest Syria, expropriating property and possessions of those who fled.

Christians and other religious minorities are guaranteed freedom of worship under a 2014 constitution adopted by the autonomous Kurdish administration in northeast Syria. However, the political authority has been accused of violations such as the closure of private Christian schools for not using administration-approved curricula.

Amid the challenges from all sides, the Christian community in Syria dropped to only 3% of the country’s population, compared to 10% before the uprising.

Samir, a Christian from Hasakah in northeast Syria tells Syria Director of the Bible’s portrayal that “we will be sheep among wolves”: “Today we’re seeing this with our own eyes.”

A Christian from Qamishli said that, after the assassination of Father Hovsep, “a feeling of anxiety and instability has returned”:

Diarbakerli agrees, “I regret saying this, but there is not even a glimmer of hope for the foreseeable future and in light of the lack of security, the only option left is to flee. Syrian Christians are being assassinated, displaced and their property is being stolen. There is no party that is treating them well.”

Bassam Ishak told Christian Broadcast News that the Kurdish governance is a “golden opportunity” to guarantee religious freedom, comparing the administration as “Isaiah’s Holy Highway” , predicted in the Bible to run through Syria as a “crescent of love, peace, and prosperity.”

This summer the Syriac Military Council has urged Christians in the US to press the American military to prevent the Turkish offensive. The prominent Christian televangelist Pat Robertson responded with a warning to Donald Trump that he would “lose his mandate of heaven” if he withdrew US troops, allowing “the Christians and the Kurds to be massacred by the Turks”.

But the Armenian Patriarch in Turkey immediately announced his support for the Turkish offensive in October. Turkish media published statements supporting “Operation Peace Spring” from Christian advocacy groups, including the Netherlands-based World Council of Arameans and Istanbul’s Syriac Ancient Foundation.

[There is a] systematic plan to expel [Christians] from their ancestral land….All of the attempts and claims to protect Christians in the Middle East, sometimes by foreign states, have led to nothing…..

There is an agreement between the extremist elements and the regime on one side, and the regime and the Iranian militias on the other, both aiming to displace Christians and change the culture.